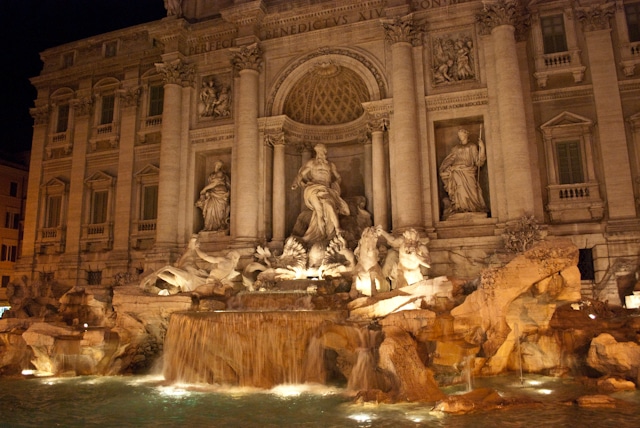 While it’s true that Rome wasn’t built in a day, I’m a firm believer that its best sights can be seen in a day. So Rome in 48 hours? Piece of cake.

Of course, if you have the time, Rome is a wonderful city in which to linger over exquisite meals, wander amidst ancient ruins and while away the day people-watching in a piazza. However, Dena and I are girls on a tight schedule and there is much to be seen during our brief two nights in the Eternal City.

We arrived in Rome after our first stop in Munich late Friday afternoon and joined the masses on a hot and mostly miserable train ride into the city (welcome to Europe in August).

We arrived at the charming Parlamento Boutique Hotel around 6pm and were pleased to find the room clean and spacious – by European standards – and the staff very friendly. The location between the Trevi Fountain and the Spanish Steps was ideal and, once again, the Trip Advisor reviews were spot on. A great find at 100 euro/night in high season.

The plan for our first night? A night shoot at the Coliseum and the Trevi Fountain then ditch our heavy cameras back at the hotel before moving on to a night out on the town. We got some amazing shots as you’ll see!

Once the “work” was done for the night, we walked over to the Pantheon area for a little late night dining Italian-style. It was our first truly delicious meal of the trip. After dinner, it was time to check out the Friday night scene in Rome.

A Friday Night in Rome

For my money, the best people-watching in all of Rome is the Campo de Fiori after dark. This lively piazza is ringed with cafes, wine bars, restaurants and night clubs and the open center of the piazza has a life of its own. Since you are allowed to bring your drinks outside into the piazza, we sipped on 2 euro wines from my favorite little wine bar and wandered around outside making new friends.

First we met Megan, a teacher from Atlanta who is currently living in Helsinki and has promised me a tour during my stopover there later this month. Megan was “third-wheeling” it with her Finnish roommate and her boyfriend who were about ready to leave when we met them. So, they left and Megan stuck with us (since we were obviously more fun, anyway).

Shortly thereafter, we proved why we were more fun by meeting the Polish swim team – in town for the World Championships. Ladies, let me just say, a trip to Poland is definitely in order. This could actually be the answer to the eternal question, “Where do they keep all of the cute guys in Europe?” (and trust me, I have looked).

So, of course, we hung with them (and Megan) for the rest of the night – first a trip to an after-hours club and then the fountains in Piazza Navona at 3am. A good time was had by all until we finally decided to call it a night and get some rest – big day of sightseeing ahead.

After sleeping til almost noon Saturday morning (hey, we needed it), we tackled our Roman sightseeing with surgical precision.

First, via Condotti and the Spanish Steps, then the Vatican, and finally the Coliseum and Trevi Fountain again during daylight hours – it was a whirlwind tour but we got it all in. We walked everywhere (which is always how I prefer to see a city) and the heat was absurdly oppressive so after several hours and many more miles, we crashed at the hotel for a bit before heading back out for our last night in Rome.

We stuck with Campo de Fiori for dinner again because the people-watching is just too good to pass up. After another delicious dinner we strolled back over to the wine bar and spent the rest of the evening making new friends around the piazza.

Still a little beat from our previous late night out and our day full of sightseeing, we called it a night around 1am. We slept in the next morning, had a great lunch and did a bit of shopping before heading to the airport for our flight to Athens. All in all I’d say we definitely made the most of our 48 hours in Rome!