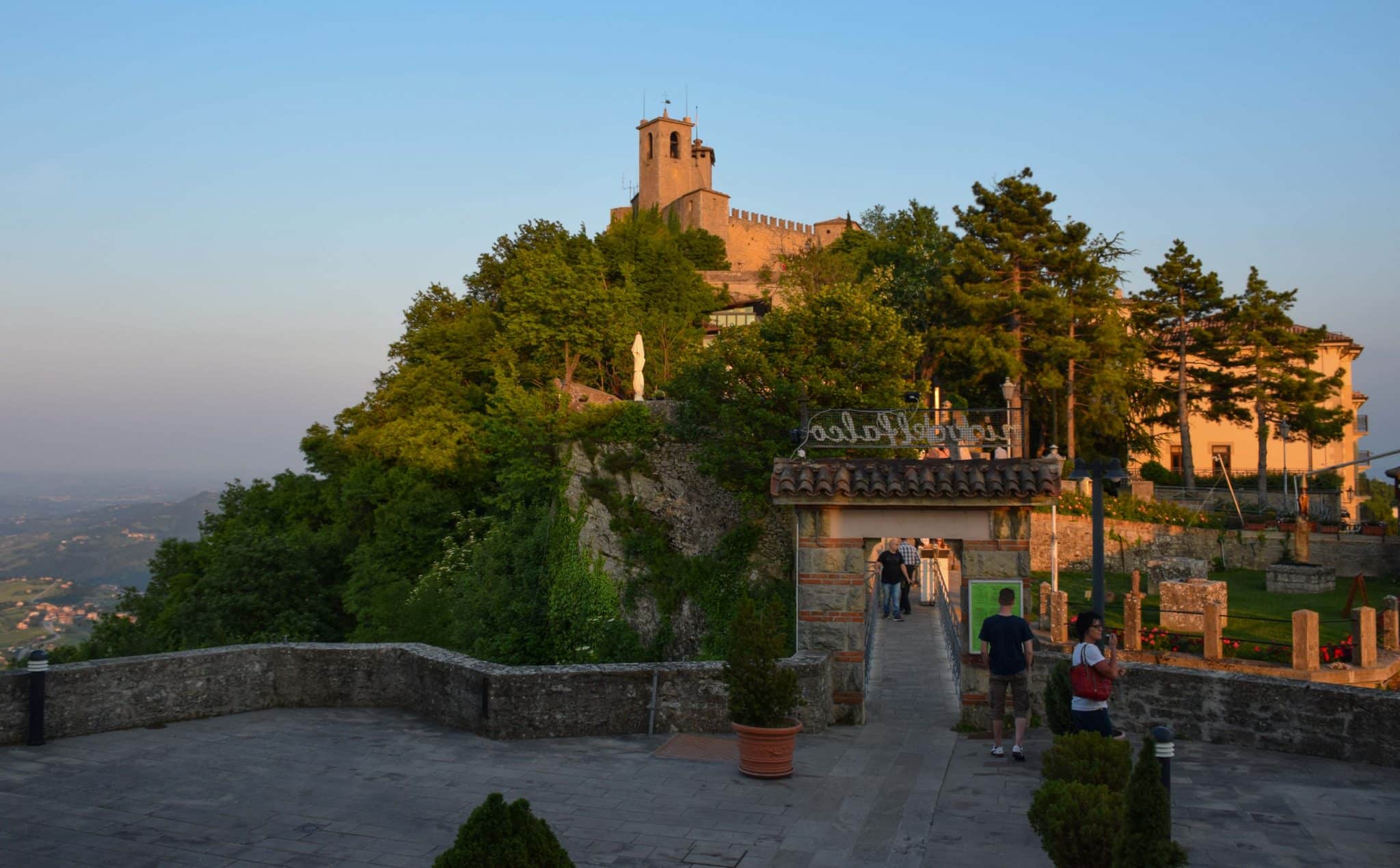 Inside: Why the magical microstate of San Marino is well worth a visit. Plus: Everything you need to know to plan your trip.

After a glorious week island-hopping from Procida to Ischia and finally, to the sun-splashed Amalfi Coast, it’s time to head north.

Read More: The Best of the Amalfi Coast in 4 Amazingly Affordable Days

My husband Dave and I catch the train from Sorrento to Naples to pick up our rental car. For the remainder of our time in Italy, we have our own wheels!

First up on this Italian road trip adventure, a destination I’ve always wanted to visit – the microstate Republic of San Marino.

Planning a trip to Italy?

As of June 1, 2022, Italy is fully open! From jaw-dropping destinations to how to find the best gelato, here’s everything you need to know.

The Ultimate guide to Italy!

Is San Marino part of Italy?

While San Marino is completely surrounded by Italy, it is not part of Italy.

Also known as the “Most Serene Republic of San Marino,” the world’s fifth smallest nation is an enclaved microstate.

Founded in A.D. 301 by a Christian stonemason named Marinus, San Marino is the lone survivor of Italy’s ancient city-state network. Incredibly, this tiny, landlocked nation situated at the top of Mount Titano somehow managed to outlast more powerful kingdoms like Genoa and Venice.

Today, San Marino lays claims to the title of the world’s oldest extant sovereign state and the oldest constitutional republic. The historic center is enclosed by a protective wall and the state’s dramatic skyline is defined by three distinct towers.

San Marino’s historic center was added to the UNESCO World Heritage List in 2008. At just over 24 square miles, San Marino has a population of approximately 33,000.

Do you need your passport to visit San Marino?

Since San Marino is an associate member of the Schengen Area, there are no border controls. So entering from Italy is a piece of cake. No passport check required.

Though you will need your passport to check into a hotel if you decide to spend the night (and you should!).

Where is San Marino & How to Get There

The Republic of San Marino sits atop Mount Titano in central Italy, near the Adriatic coast. San Marino has neither an airport nor a train station so driving is the easiest way to reach it.

From Florence: The drive takes 3 hours.

If driving in Italy isn’t your thing, take the train to Rimini which is about 20 km away. From there, bus 72 gets you to San Marino for about EUR 10 round-trip. The bus does make several stops and can be crowded in the summer months.

A taxi from Rimini is a faster (though more expensive) option and only takes about 30 minutes.

I booked our rental car in Naples through RentalCars.com, my favorite site for car rentals around the world. Clear pricing upfront and no surprises at the counter.

The route from Naples takes us across the center of Italy to the eastern Adriatic coastline past Ancona and Pesaro and ultimately to our turn-off near Rimini. This part of Italy is quite flat so it’s easy to spot the dramatic profile of San Marino high atop Mount Titano from several miles away.

As we start our ascent up the mountain (crossing the border along the way) the roads begin a corkscrew path to the summit. Within 15 minutes, we spot the city walls of San Marino’s historic city center.

For our one night in San Marino, we chose the top-rated Hotel Rosa.

Located just inside the city walls, the Hotel Rosa is situated right at the base of the first tower. The hotel has free parking, however, the roads within the city walls are closed to cars from 7:00pm – 10:00am each day.

Luckily, we arrive just a few minutes after 7:00pm. Perfect timing! (When the roads are closed, the hotel does have parking available just outside the city walls.)

We easily find the hotel (as I mentioned, San Marino is small) and are greeted warmly at check-in. I immediately notice that the hotel has incredible views from several terraces around the property.

With soaring towers in every direction, it almost feels like we are staying inside a castle.

Sunset is still an hour or two away, so we drop our bags and head out to explore before dinner. The hotel clerk offers some directions and a map of the city center and we’re off!

Tip: If the Hotel Rosa is booked when you visit (and it often is!), the Titano Suites is another terrific choice. Slightly more expensive than the Rosa but larger rooms and equally fabulous views.

Things to do in San Marino

The top thing to do in San Marino? Visit the three impressive fortresses (towers) anchoring the city walls. The first two are the most impressive and therefore most popular with visitors.

Also known as Rocca Guaita, the First Tower was built in the 11th century directly into the rock. Throughout history, this is where San Marino’s residents took refuge against sieges. In fact, as recently as 1970, parts of the tower were still used as a prison.

Dating back to the 13th century, the Second Tower is perhaps the most dramatic, perched atop the highest peak of Mount Titano. Known as Castello Cesta, it houses the popular Museum of Ancient Weapons (another must-see!).

Montale, the smallest of the three towers, still played a strategic defensive role in San Marino’s history. It was considered the best lookout point to spot arriving invaders.

The palace is San Marino’s seat of government and can only be visited when the council is not in session. A changing of the guard ceremony takes place during the summer months.

The State Museum (in Piazza Titano)

The Museum is home to artifacts related to San Marino’s founder Saint and the Republic’s history. The St. Francis Museum, built in 1361, houses a collection of paintings and frescoes.

For just 10.50 euro, visitors can purchase a “Combined Museum Pass” that allows entry to all of the above sights which can easily be seen in a single day. Visiting times for all are 9:00am-5:00pm daily.

An evening stroll around San Marino

We missed the 5:00pm closing time so exploring the towers will have to wait until the morning.

Instead, we begin our evening with a walk around the towers and delight in the charming cobbled streets of the historic center. Then we settle into a cliffside restaurant to watch the sunset and grab some dinner.

At more than 2,500 feet above sea level, San Marino has some pretty spectacular views of the surrounding countryside and the Adriatic coast. Not to mention sunset views that are out of this world.

We order a bottle of local San Marino wine (which is delicious) and traditional Italian pasta dishes for dinner (the Republic’s food differs little from that of the rest of Italy).

The sunset is one of the best we’ve ever seen. Between the imposing stone towers, the city walls, and the views of the valley and sea below, the whole scene is like something out of a fairytale.

The next morning, we get an early start to tackle everything we missed yesterday.

We arrive at the First Tower right at 9:00am and buy the Combined Museum Passes. The views from the towers are even more incredible than from the restaurant last night. I am really starting to feel like a character in a Disney princess movie.

From there, we visit the Second Tower, Third Tower, and both museums before deciding we’ve covered everything on our wish list.

By mid-afternoon, we’re back on the road for the 3-hour drive to Florence. We’ll stop there for two nights at the villa where we got married. Then we’ll drive to the coastal town of Piombino to catch a ferry over to Tuscany’s scenic Elba Island for the weekend.

We absolutely adored the Republic of San Marino. It’s well worth the effort to reach this mountaintop gem and I can’t believe we didn’t do it sooner.

A night or two is all you need to appreciate the beauty and history of Europe’s third smallest nation. Be sure not to miss San Marino on your next Italian holiday.

Next, we’re off to one of Tuscany’s best island escapes (I’ve heard the beaches are some of the best in all of Italy!), Elba Island!

Read More: 3 Reasons to “Make Like Napoleon” and Escape to Italy’s Elba Island

Bucket List Italy: How to Visit the Iconic Leaning Tower of Pisa

Is the Volcanic Island of Ischia Italy’s Hottest Destination?

182
121
We use cookies to ensure that we give you the best experience on our website. If you continue to use this site we will assume that you are happy with it.OkPrivacy policy