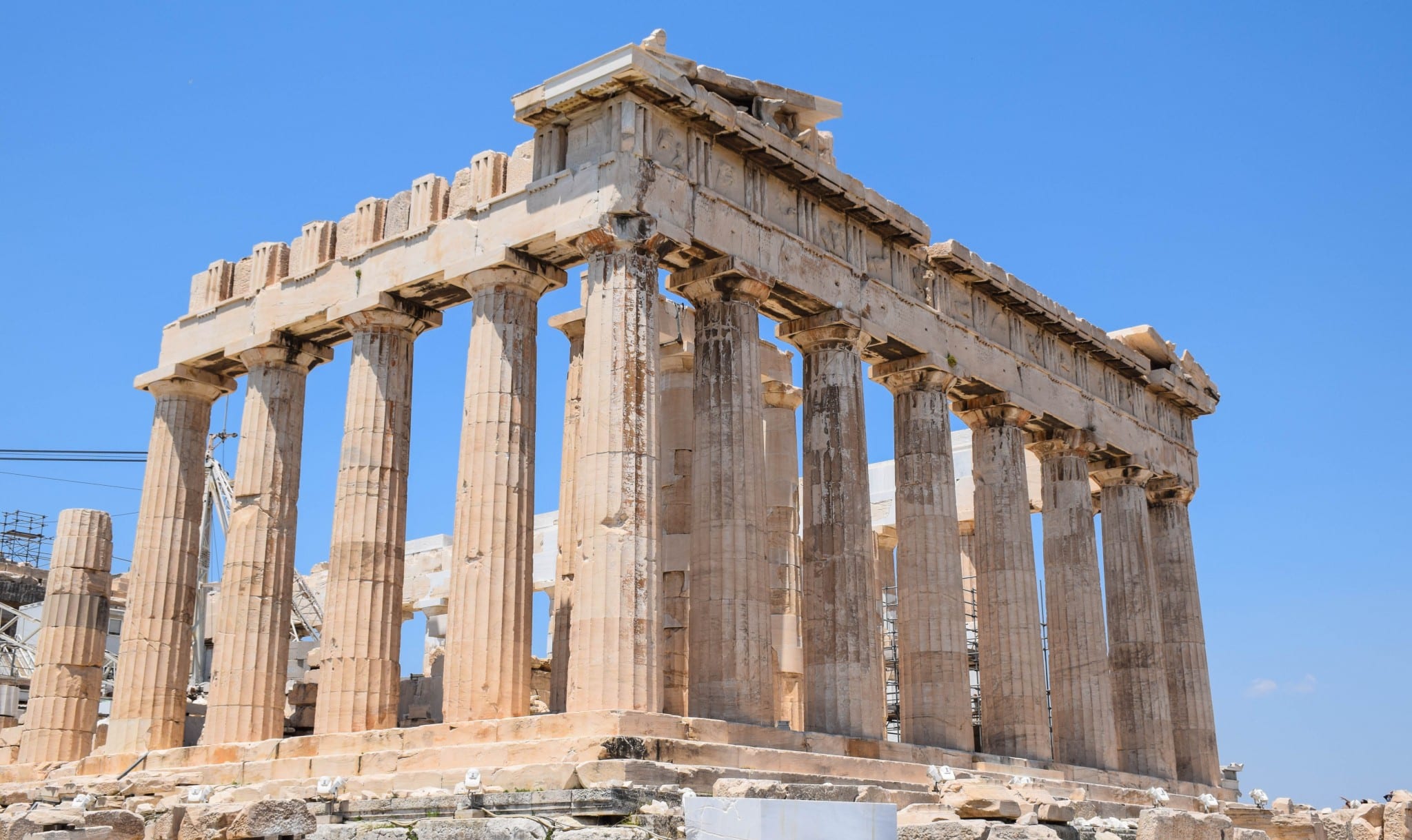 After wrapping up an incredible 10 days in Italy, it’s time to move on to the next country on our round-the-world honeymoon tour…Greece!

As some of you may know, a trip to Greece in my late 20’s was the first-ever stamp in my passport. Three passports later, it’s still one of my favorite places in the world and I’ve returned several times since that first trip.

Read More: The Meaning of Mykonos: The Island that Inspired a Lifetime of Wanderlust

In previous trips, I’ve never found Athens to be particularly exciting. But when you visit Greece for the first time, it’s a must-see.

And since this is my husband Dave’s first trip to the country, obviously at least one day in Athens is in order before heading out to the islands.

I just returned from another 2-week trip traveling around the Greek Islands. I wrote a comprehensive post about traveling in and around Greece right now during the Covid-19 pandemic:

The Ultimate Guide to the Greek Islands

It’s everything you need to know from entry requirements to where to get a Covid test if you need one to return home. Plus all the essentials for traveling to Greece right now. If you’re planning a trip to Greece this summer, it’s a must-read.

Bonus Tip: If there’s island-hopping on your summer itinerary, the best site for booking ferry tickets in Greece is FerryHopper.com.

And now, back to Athens!

We arrive in Athens from Venice at 9:00pm and our flight to Santorini isn’t until tomorrow night at 11:30pm. Just over 24 hours in Athens and plenty of time to see the city’s best highlights.

With our stay in Athens centering around flights in and out, we decided to stay near the airport at the Holiday Inn Attica Athens Airport. The hotel has a free airport shuttle and easy access to a direct bus to the city for sightseeing.

For our lone day in Athens, we have a pretty defined itinerary. First up, the changing of the guard in Syntagma Square, then lunch and shopping in the Plaka, and finally, a visit to the Acropolis (and the Temple of Zeus if time permits).

It’s a leisurely schedule for a full day so we sleep in a bit and head into the city just in time for the 11:00am changing of the guard.

The Changing of the Guard

I was sure that I’d seen the changing of the guard outside the Hellenic Parliament before. I remember seeing it on my first trip in the late 90’s and again when I visited Athens with friends on later trips.

But I realize as Dave and I watch the crowds swell approaching 11:00am that I’ve never witnessed the formal changing of the guard ceremony that happens only on Sundays at 11:00am.

Yes, there are hourly guard changes each day but on Sunday mornings they up the pomp and circumstance with a full parade march and official national costumes.

The duties of the soldiers are part ceremonial in nature. Each soldier guards for roughly an hour, 3 times in total every 48 hours. Throughout their hour shift, they must stand absolutely still, making no face or eye movements and must not show any expression until it is time to switch with another guard.

During the changing ceremony, they work in perfectly coordinated pairs and their steps are carried out in exaggerated slow motion in order to protect their blood circulation after an hour of immobility.

The soldiers of the Presidential Guard are subjected to a difficult training process before they are selected, including exercises to keep the mind and body still. Height, excellent physical condition and psychological state as well as character and morality are all part of the strict criteria for selection.

The uniforms of the Presidential Guard

The elaborate uniform of the Presidential Guard also has a historical meaning and is derived from the Greek warrior groups, Kleftes and Armatoloi. The uniform’s white skirt has 400 folds – one to represent each year of Ottoman occupation over the Greeks.

We arrive about 20 minutes before the ceremony and join hundreds of others jockeying for position outside the Parliament building.

And then just before 11:00am we hear the drums from afar and then spot the unit approaching Syntagma Square in precise formation. It’s quite an impressive sight to watch them parade by. But thanks to the large crowd we don’t have a great view of the actual ceremony so we bail out a little early and make our way over to the Plaka for lunch.

As the city’s hub for shopping and dining, the Plaka neighborhood sits at the base of the Acropolis and is a favorite with tourists.

It’s already an excessively hot day and in Athens, there’s no escaping the sun so we decide to duck into a restaurant for lunch before continuing on to our main objective – the Acropolis.

Located on a flat-topped rock that rises nearly 500 feet above sea level, this ancient citadel is the iconic symbol of Athens.

While evidence suggests that the hill was inhabited as early as the 4th millennium BC, the construction of the Acropolis’ most significant structures – the Parthenon, the Propylaia, the Temple of Athena Nike, and the Erechtheion – took place during the Golden Age of Athens under the reign of Pericles in the 5th century BC.

We make the climb up the hill passing the impressive theater that is still used to this day for special performances. We join the crowd at the summit admiring the view over the sprawling city of Athens. As it has been most of the times I’ve seen it, the Parthenon itself is almost completely obscured by scaffolding – restoration on the site seems to be an endless process.

But it hardly detracts from the beauty of the site and we complete a circle around it before continuing on to the other well-preserved structures nearby.

After wrapping up our tour of the Acropolis, we wander across the street to visit the unusually tourist-free Temple of Zeus before deciding we’ve had enough sun for one day.

We headed back to the hotel in time to grab a bite to eat before taking the shuttle to the airport for our 11pm flight to Santorini.

It was a terrific day but I can’t wait to get to the islands and stay in one place for a few days.

Things to Do in Crete Greece: The Ideal Itinerary for 5 Perfect Days

The Meaning of Mykonos: The Island that Inspired a Lifetime of Wanderlust

5 Reasons to Fall in Love with Paros Greece (Hint: Antiparos is one)

How to Plan the Perfect Santorini Honeymoon (on a budget!)

17
We use cookies to ensure that we give you the best experience on our website. If you continue to use this site we will assume that you are happy with it.OkPrivacy policy