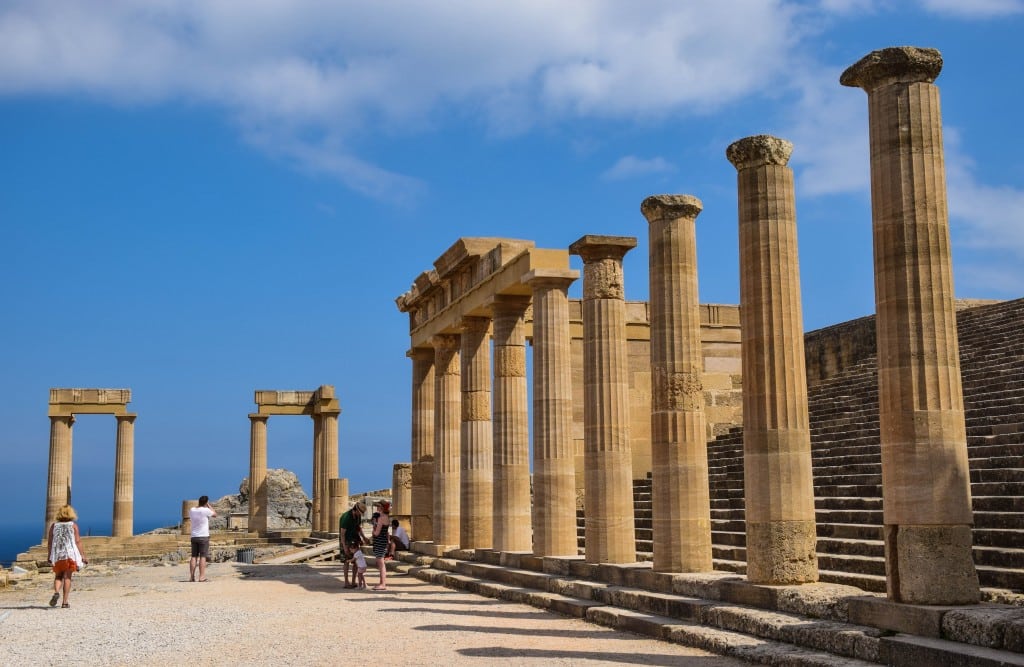 It’s nearly impossible to say no to the Greek Islands.

But then again why would you?

So, on this 30-day trip from Moscow to Turkey, it’s inevitable that a few Greek islands will make their way onto the itinerary.

Mykonos has long been a fixture on previous summer adventures. This year Crete, Rhodes, Symi, and Kos are on the agenda. So after a fabulous 5 days in Crete, today I move on to my next stop in Greece, this island of Rhodes

It’s just after 9:00pm when my short flight from Crete touches down on the island of Rhodes. I catch the local bus into town (a nice money saver at 3 euro versus 27 euro for a taxi) and twenty minutes later I arrive in the heart of Rhodes Town.

I just returned from another 2-week trip traveling around the Greek Islands. I wrote a comprehensive post about traveling in and around Greece right now during the Covid-19 pandemic:

The Ultimate Guide to the Greek Islands

It’s everything you need to know including entry requirements and where to get a Covid test if you need one to return home. Plus all the essentials for traveling to Greece right now. If you’re planning a trip to Greece this summer, it’s a must-read.

And now, back to Rhodes!

Where to stay on Rhodes

But for my brief 24-hour stay, I needed something central and convenient for making the most of my time here.

After diligent research, I chose the Oktober Rooms. It’s just a short walk from the bus station and it takes me less than 5 minutes from the time I step off the bus.

The hotel turns out to be a great budget choice. The rooms are sparkling clean and modern and the central location is ideal for exploring the island.

The complicated history of Rhodes

The largest of the Dodecanese Islands, Rhodes has known many civilizations throughout its turbulent history.

Inhabited since the end of the Neolithic period (4000 BC), the city of Rhodes prospered for centuries during its Golden Age. In 164 BC, Rhodes lost its independence and became a province of the Roman Empire. Over time, Rhodes developed into a renowned center of learning for arts and science.

When the Arabs attacked in the 7th century, they occupied Rhodes for several decades. Then, in 1522, the Ottoman Turks captured the city. During their rule, Rhodes lost much of its international character.

By 1912, the Italians were in command and began transforming the city into much of what you see today.

Things to do in Rhodes

With just one full day to explore the island of Rhodes, I have two primary things on my to-do list:

I begin my day with a walk along the marina toward the historic Old Town.

But first, a ferry ticket from Rhodes to Symi

The first order of business is buying my ferry ticket to Symi for tomorrow. Along the waterfront, endless counters offer ferry tickets and boating day trips. I finally find the one I need, Dodecanese Seaways.

There are two ferry options to Symi each day. The first is a 9:30am departure that makes a stop on the southern end of Symi to visit the Panormitis Monastery before continuing on to town.

The second is a direct ferry to town departing at 8:30am. Unfortunately, the 9:30am (the one I hoped to book) is totally booked for tomorrow so I have to settle for the direct at 8:30am.

Tip: The absolute best site for booking ferries in Greece (in advance!) is FerryHopper.com.

With that done, I wander along the water until I come to the imposing entrance to the Old Town known as the Marine Gate.

This is my first visit to the Dodecanese Islands, so I am initially surprised by the Muslim influences in the Old Town of Rhodes until I read a little more about the island’s history of various conquerors.

The Arab and Ottoman periods resulted in the construction of a number of mosques that still stand within the Old Town walls.

The streets are very different from anything else I’ve seen in Greece. They actually remind me more of the Bascarsija neighborhood in Sarajevo. Not at all what I expected but still very beautiful.

Read More: The Jerusalem of Europe – Sarajevo, Bosnia and Herzegovina

The Old Town is full of the usual tourist shops, cafes and restaurants. Yet I find myself easily drawn into its medieval feel as I wander along the Street of the Knights.

Palace of the Grand Masters

I work my way over to the town’s crown jewel, the Palace of the Grand Masters.

The most important monument from the period of the Knights’ rule, the palace was neglected by the Turks (who turned it into a prison) and nearly blown up along with the Church of St. John in 1856.

The Italians began an enormous reconstruction project and today its Gothic architecture towers over the Old Town.

For my final stop in the walled city, I’m dying to get a birdseye view over the old town from the belfry of the clock tower. Built at the end of the 7th century, the clock tower sits on the ruins of the Byzantine tower connected with the Palace of the Grand Masters.

It was also virtually destroyed in the 1856 explosion but was lovingly restored to its original Baroque glory and now offers the best viewpoint in the city.

It’s the best spot to get a view of the city from above before I catch the bus to Lindos.

The Village of Lindos

Considered the most picturesque town on the island of Rhodes, Lindos owes its beauty to the strict regulations of the Archaeological Society which controls all development in the village.

The traditional white stucco with bright blue trim is the classic Greek façade I’ve come to expect from the islands but haven’t seen yet on this trip.

A little over an hour after departing Rhodes Town, the bus round its final corner.

My first view of Lindos is awe-inspiring. The whitewashed village is literally sandwiched between a stunning arc of sand below and the towering Acropolis of Lindos above.

I know right away that I want to see both the beach and the Acropolis up close. From my current position that means I have a lot of ground to cover.

The beaches of Lindos

The bus drops me off at a road above the village so I follow the road down to start with the beach. Lindos actually has two beaches and they are both lovely (and both packed with tourists).

Time to take a walk up to the village.

For those not willing to do all the walking necessary to get around Lindos, not to worry. There are plenty of donkeys available to get you up those steep hills (just like in Santorini).

Read More: How to Plan the Perfect Santorini Honeymoon (on a budget!)

A nice photo op, surely, but I chose to walk.

The village of Lindos, aside from the standard assortment of souvenir stands, is majestic in its architectural purity. It’s a gorgeous example of a Greek village straight out of central casting.

As I wander its narrow arteries, I find signs pointing the way to the Acropolis and follow the path. Before long, the village is far below me as I enter the medieval walls of the Castle of the Knights.

The Acropolis of Lindos

The Acropolis of Lindos contains the ruins of Rhodes’ three Dorian towns including the especially impressive Sanctuary of Athena.

The views from the Acropolis are incredible from all sides. It’s easy to see why people consider Lindos the island’s most beautiful town. The town’s natural landscape is spectacular alone.

By the time I make my way back down to the village it’s nearly 5pm. I arrive at the bus stop just in time to grab one of the last seats on the packed 5:30pm bus back to town.

Back in Rhodes town, I again pass through the gates to the Old Town to find a delicious dinner at a taverna. After dinner, I pop in and out of a few shops before making the short walk back to the hotel.

It was a terrific day exploring Rhodes and I have no doubt there are many more places to explore on this beautiful island.

But, as usual, time is short.

I’d love to return to Rhodes someday to see more (especially more of those lovely beaches!).

But, for now, I am incredibly excited to continue on to island #2 in the Dodecanese tomorrow (in fact, getting there is the main reason for my stop on Rhodes!)

Looking for more fabulous places in Greece to visit?

Things to Do in Crete Greece: The Ideal Itinerary for 5 Perfect Days

5 Reasons to Fall in Love with Paros Greece (Hint: Antiparos is one)

The Meaning of Mykonos: The Island that Inspired a Lifetime of Wanderlust

How to Plan the Perfect Santorini Honeymoon (on a budget!)

258
171
We use cookies to ensure that we give you the best experience on our website. If you continue to use this site we will assume that you are happy with it.OkPrivacy policy