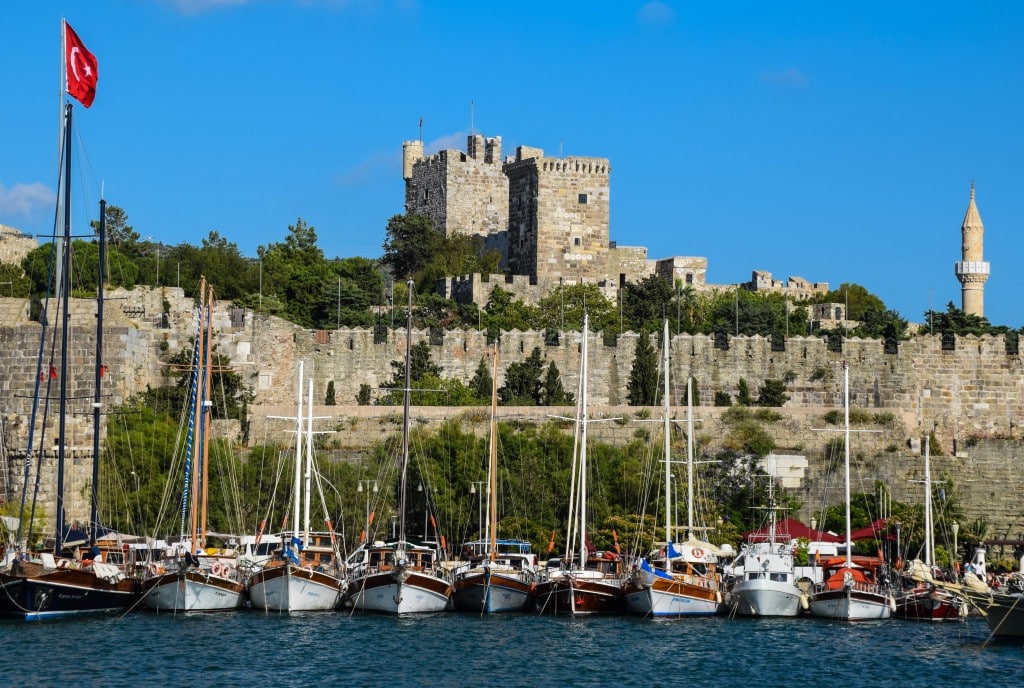 I had originally planned to spend a night on Kos while in transit between Symi and Bodrum but I ran out of time to research where exactly I wanted to stay and when I arrived in Symi I realized that’s where I wanted to stay.

Based on what I saw of Kos (which I admit was just the main town) I think I made an excellent decision. The harbor area, while scenic and possessing the obligatory castle, was incredibly touristy to the point that I’m not sure I would have survived more than a few hours there. It clearly catered to the package tourist and 20-something European nightlife set, neither of which was a group I counted myself a part of.

I arrived in Kos at 11:00am and made my way over to the booking counters for the Kos to Bodrum ferry (which couldn’t be booked on Symi) to get a ticket for the first crossing at 4:00pm. Luckily, as Symi Tours had promised, it was available. With that done, I now had roughly 4 ½ hours to kill.

Even though I had my luggage in tow, I wanted to try to see some of the town’s sights so I started with something Sevasti had recommended, the Tree of Hippocrates. Kos is known as the “Island of Hippocrates” – the father of modern medicine – and is considered an invaluable outdoor archaeological museum.

I easily found the shady Lozia Square in the center of town where the plane tree (said to be the largest in Europe) seemed to struggle under the weight of its heavy branches extending out in every direction. Legend has it that Hippocrates taught his pupils the art of medicine under this tree. Of course, the current tree is only 500 years old but it is thought to be a derivative of the original tree. Hippocrates. Tree. Check.

With my lone sightseeing task accomplished, I grabbed a table at a waterfront restaurant with wifi and got some work done editing photos over one last delicious Greek meal for lunch…I will miss Greek food terribly. Sigh.

Luckily, in Europe, it’s perfectly acceptable to occupy a restaurant table for hours at a time so I made productive use of my remaining time on Kos while enjoying another excellent office view. By 3:30pm it was time to head back to the ferry terminal for the 30-minute trip to Turkey.

Like Kos, I didn’t have any major plans for Bodrum. It was just the best route to get to the other stops on my Turkish itinerary. In fact, I’d only just decided to spend the night there because I worried there might not be an evening bus all the way to Ephesus that same night.

But as we sailed into the harbor, I realized I might have underestimated the resort town of Bodrum. The harbor (resplendent with yachts and, wait for it…a castle) was stunning in the late afternoon light. Skyscraper-sized sailboats were lined up one after another like an advertisement for the America’s Cup race, each with their billowing crimson Turkish flags heralding their national pride.

My hotel, which I’d just booked on Booking.com the day before, turned out to be perfect despite its unusual name. The Moonshine Suites Villa was just a 10-minute walk from the ferry terminal and with a little help from Google maps (thanks again for the free global data, T-Mobile!) I found it with no trouble at all.

It was even better than the glowing Trip Advisor reviews had made it sound. A small hotel with bougainvillea wrapped terraces surrounding a pristine-looking blue swimming pool; it was all very Melrose Place circa 1990’s.

To top it off, I’m not sure if I got an upgrade or if all the rooms looked like mine but I had a large, stylishly-decorated, two-room suite. With free wifi and breakfast included, the $50 a night rate seemed like a steal. Not to mention the front desk agent was extremely helpful and provided me with a map and directions to the bus station when I inquired about my options for getting to Ephesus the next day.

I figured there might be several options through connecting cities and I’d need to leave early in the morning but from what I’d read, Pamukkale Tours ran the best bus service between the two towns so I went straight to their booking office at the bus station.

It would put me into Selcuk at 1:30pm which wouldn’t give me as much time as I’d hoped to see Ephesus but at least it was a direct bus so I wouldn’t have to deal with changing to another bus at Soke as I expected.

And as a bonus I would get to sleep in a bit. With that task accomplished, I took a walk back down to the marina and settled in at a waterfront restaurant for a glass of wine and some dinner while the sun set in the distance. I hadn’t seen a decent sunset since Crete so I was long overdue.

Bodrum is best known for its nightlife scene and the marina area pulsates with bars and discos after dark but I wasn’t feeling especially inspired to check out the Turkish nightlife scene so after dinner I headed back to the hotel to get some rest. I had a big day ahead.