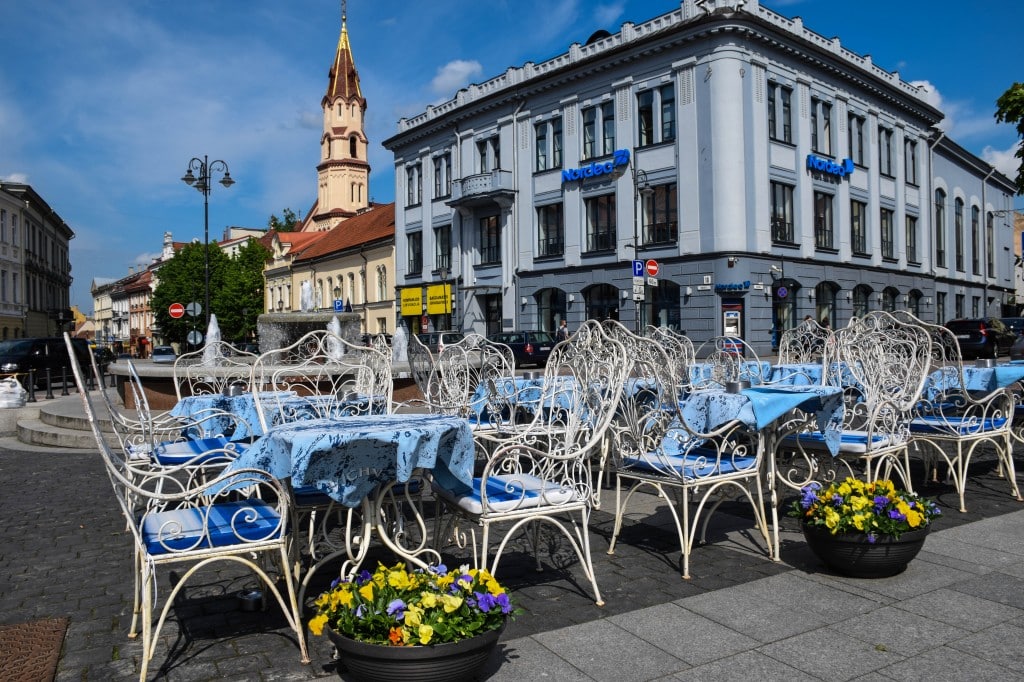 The original plan for this trip called for an overnight stay in the city of Vilnius Lithuania. But with the flight we needed to get to Sardinia only offered a few days a week, including Vilnius on the itinerary meant losing a day in Russia or eliminating Riga from the itinerary altogether and we didn’t want to do either.

But Shannon and I both wanted to at least get a glimpse of Vilnius, even if it would just be for a few hours. And the flight to Italy was much cheaper from Vilnius than Riga so we decided it was a sign that we were meant to make a stop in Lithuania on this trip after all.

The heavy rains from the night before continued for the entire 3 ½ hour bus ride from Riga to Vilnius and we were convinced we’d be spending our 3 hours in the city walking around in a downpour. But miraculously, after a very pleasant bus ride, the rain stopped and the clouds parted just as the bus pulled into the central station. Hooray!

We quickly located the luggage storage counter at the bus station and unloaded our roller bags. We kept our backpacks with us, despite the weight they would add to our walk.

Next, we checked the schedule for the airport bus and bought our tickets for later that afternoon so we knew exactly how much time we had to wander. With those tasks accomplished, we headed out of the station excited to get our first look at Lithuania (Shannon’s 50th country!).

Situated at the confluence of the Vilnia and Neris rivers, Vilnius is Lithuania’s capital and largest city. The root of this eastern-European city’s charm is definitely its Old Town, the continent’s largest Baroque old town which was inscribed to the UNESCO World Heritage List in 1994.

The streets of the Old Town are laid out in typical medieval design and the town has overcome centuries of invasions and partial destruction to preserve an impressive array of Renaissance, Gothic and Baroque architecture.

With limited time, the plan was to get up to higher ground and get an overview of the city from one of several lookout points around town. Shannon had read about the views from the Upper Castle (also known as Gediminas’ Tower) and in our research over dinner in Riga the night before we’d also discovered that the Bell Tower of the Vilnius Cathedral Basilica had great views over town.

We decided to head straight for the Cathedral since it was in the center of the Old Town and next door to the entrance for the castle. We were unable to locate a good tourist map to pick up at the bus station so we had to rely on the bus stop maps around town and our phones for direction.

Luckily, the walk was only about 15 minutes and we found the cathedral without any trouble. As we wandered through the cobblestoned streets of the Old Town, I was surprised by just how beautiful it was. I’m not sure why, but I didn’t think Vilnius would be as impressive as Tallinn or Riga.

I was wrong. The architecture is incredible and the buildings have obviously been painstakingly restored to recapture much of their former glory. A colorful palette of shops and cafes line each street and it has a comfortable and inviting feel that could make you want to stay awhile.

We arrived at the Vilnius Cathedral Basilica and took a look inside the cathedral, the primary place of worship for Lithuanian Catholics. In 1922, the church was awarded the “basilica” title, the highest church category awarded by the Pope and many prominent people in Lithuanian history are buried in the Cathedral’s vaults.

The Cathedral’s Bell Tower had just reopened earlier this month after a decade of restoration so we thought that might be a good place to get our view over the city. Unfortunately, they didn’t take credit cards for the entrance fee so we had to head off in search of an ATM to get a bit of local currency (unlike Latvia, Lithuania isn’t yet on the euro).

After finding the ATM, we were about to head back to the Bell Tower when we noticed the amazing views from the giant hill overlooking it, which turned out to be the Upper Castle.

Deciding we shouldn’t settle for just the Bell Tower view when we could get a view that included the Bell Tower, we headed for the hill, heavy backpacks in tow. It was a long, grueling walk in the heat up the hill to the top of the castle (made more grueling by the fact that if we’d simply walked inside the museum at the base of the hill there was a funicular that would have taken us up for just $2…ugh) but the views over the city were indeed amazing.

The red-brick tower within the castle is restored from the Higher Castle built in the 13th century by the Duke of Lithuania. From our vantage point atop the hill, we had the perfect 360-degree view of Vilnius and a lovely breeze on what was quickly becoming a blazing-hot summer day.

The tower itself was crowded with school groups lining up to climb to the top so we decided we’d climbed high enough for one day and took the funicular back down to save time.

By this time we had about an hour left before we needed to head back to the bus station so we took a walk over to the Town Hall Square. Anchored by the impressive classical design of the Town Hall building, Vilnius’ Town Square is a lively open space lined with shops and cafes.

On this beautiful summer afternoon there were lots of locals out enjoying the sunshine. Unfortunately, we didn’t have enough time to sit down and enjoy some Lithuanian cuisine so we had to settle for an ice cream on the walk back to the bus station.

It’s always difficult when I have such a short time to see a new place and I’m sure some of you wonder why I bother to go at all if I don’t have time to see it all. But the harsh reality is that the world is enormous, and rarely is there enough time to do justice to each new place we visit – especially if you’re like me and long to visit a LOT of places.

But if the alternative is not to see it at all, then to me, whatever amount of time I can squeeze in is always worth it. And I’m so glad I was able to get even a little taste of Vilnius. It’s a beautiful city that deserved more of my time but for now, today’s 3-hour tour will have to suffice.

Next stop, Corsica and Sardinia!