Sardinia and the Maddalena Islands 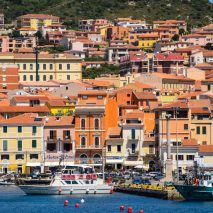 After dedicating our first full day in Sardinia to a day trip to Corsica, we weren’t exactly sure what to do with our other full day. We had wheels (about the only positive statement I can make about the ridiculous Smart Car, it did have wheels) so we had the freedom to go wherever we liked with our second day. But as I mentioned before, Sardinia is a huge island and the driving distances are fairly long, especially with mountain roads, so we needed to narrow down our day to a specific region.

Our helpful front desk clerk at the Hilton Olbia and the car rental guy had both highly recommended the ferry over to Maddalena Island and after a little research we decided that would be a great way to spend our day.

Situated between Sardinia and Corsica, the Maddalena Archipelago is made of up 7 large islands and 55 tiny islets surrounded by turquoise seas more reminiscent of the Caribbean than the Mediterranean. The islands’ strategic location in the Strait of Bonifacio made them a natural choice for military bases and from 1972 until 2008 there was a US Naval Support Activity Base here as well as a NATO base on nearby Santo Stefano.

The prosperity brought by the military bases meant that the pursuit of tourism dollars was largely unnecessary for the local residents. The closing of the US base in 2008 was a major blow to the local economy and encouraging tourism has since become a high priority.

The Maddalena Islands are a natural fit for travelers seeking great beaches and a welcoming local community. And thanks to the years of American military activity on the islands, English is more widely spoken here than almost anywhere else in Italy. 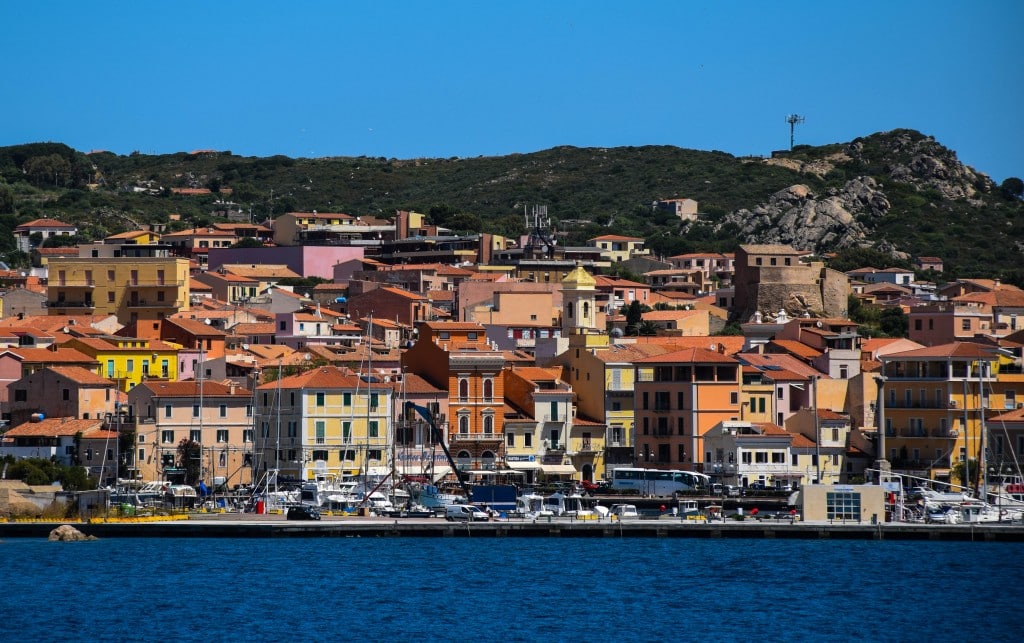 The ferry to Maddalena left from the port town of Palau, which we’d passed on our way to Santa Teresa Gallura the day before so we knew exactly how to get there and it took us a little less than an hour. The ferries run hourly so we slept in a bit and arrived just in time to buy tickets for the 10:00am departure. 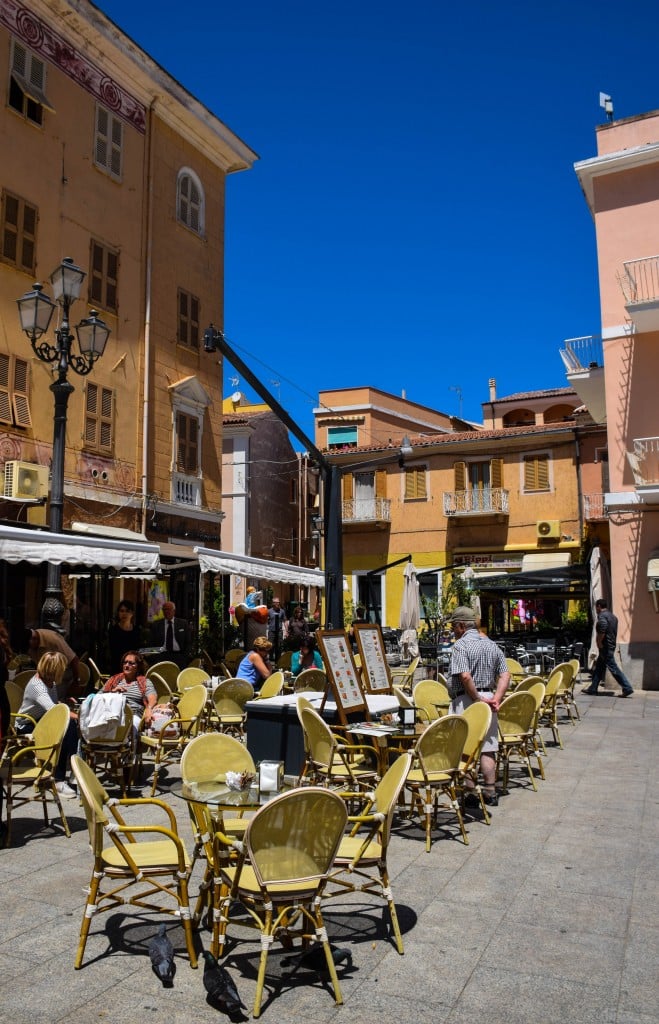 The town of La Maddalena

This time, we elected to bring the half-car-half-bicycle-built-for-two on the ferry with us as it was only a few euro more to bring it along and it seemed like a car would be necessary to see the sights on Maddalena and take the bridge over to the neighboring island of Caprera. It was my first time driving a car onto a ferry but it was easy since, as I already mentioned, it wasn’t really a car.

The ferry ride is just under an hour and by 11:00am we were docking in the perfect little Italian village of La Maddalena. I drove the car off the ferry and we decided to park in town for a while to wander the streets a bit and have some lunch before taking a driving tour of the island. We were also hoping to find a tourism office to pick up a map and some tips on where to go.

The town was completely adorable, as beautiful as any Italian town I’ve visited. Cobbled streets, shops, cafes, sea views from every corner, the whole nine yards. We easily located a tourism office and after a short consultation left with a map in hand and a plan for the rest of the day.

After stopping for some lunch, we got back in the car and began our perimeter driving tour of the island. Our first stop turned out to be the most beautiful beach we would see all day, Spalmatore. I’d read that these islands were a cross between the Seychelles and the Maldives and while that seemed like an incredibly tall order, Spalmatore definitely reminded me of the beaches of the Seychelles with its giant boulders and rock formations.

From there we continued on around the island to three or four more beaches that were all beautiful but didn’t quite compare to Spalmatore. It only took us about an hour to drive the entire perimeter of the island so we decided to take the bridge over to Cabrera to visit the two beaches the lady in the tourist office had highlighted on our map. 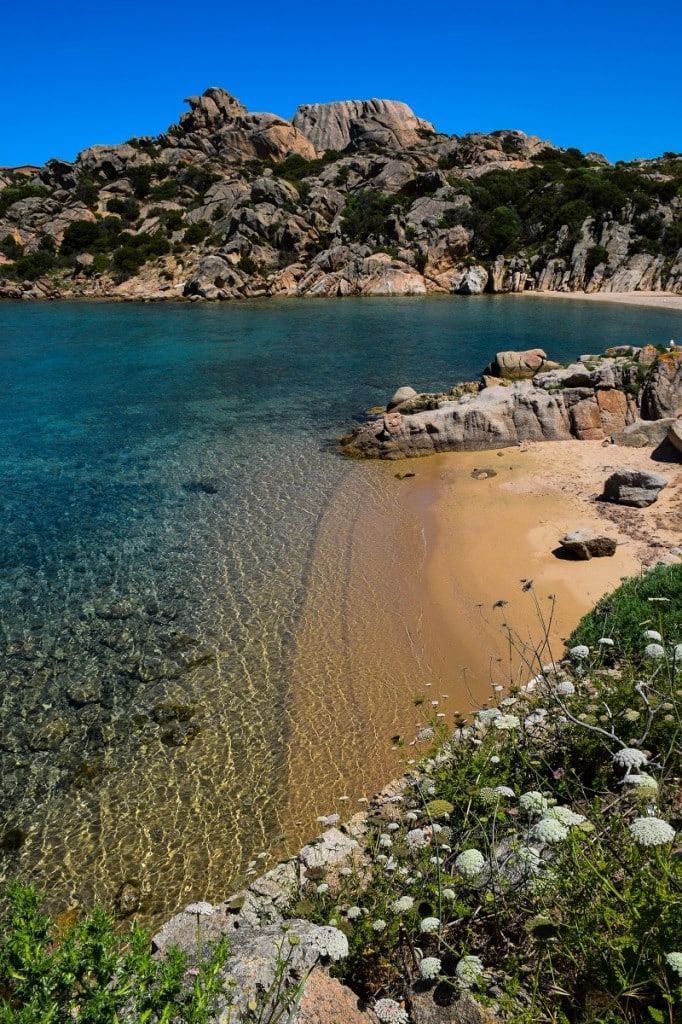 Best beach of the day…Spalmatore on Maddalena

Most of the smaller island of Caprera is dedicated to national park land so there aren’t really any hotels or services on the island. But there are lots of camping facilities, a few roadside snack bars and, of course, plenty of beaches.

We drove out along the southern peninsula of the island stopping to check out several beaches along the way. Again, I think we were spoiled by the first beach because none of the Caprera beaches seemed quite as impressive…and I definitely never saw anything resembling the Maldives so I’m not sure where that reference originated. I do concede the Seychelles comparison though, especially at Spalmatore Beach.

By 4:00pm, we’d already completed a lap of both islands and decided to take the ferry back over to Sardinia and cruise along the Costa Smeralda on the way back to our hotel in Olbia. Known as the “Emerald Coast” of Sardinia, the Costa Smeralda is an extremely popular holiday destination with wealthy Italians, the international jetset and a variety of celebrities.

In fact, this 12-mile stretch of Sardinian coastline is allegedly home to the most expensive real estate in all of Europe. Not to mention a number of luxury hotels (including 4 Starwood hotels – all sold out while we were there) with rates as high as $2,000-$3,000 a night. Just a smidge out of our budget for this trip so we’d have to settle for a drive through.

Porto Cervo is the main town along the Costa Smeralda so we followed the signs toward it in search of luxury yachts and movie stars. Unfortunately, they must keep this area pretty locked down because we didn’t have much luck finding anything of note. We could see a few beaches that looked nice from above but we couldn’t find a road to access them, my guess is that the best beaches in the area are all the private property of a hotel or a home.

I’m sure there were some more beautiful spots along this stretch of the coastline but I guess you have to know where you’re going to access them…oh well! It was still a terrific day and we capped it off with dinner near the water in Olbia before heading back to the hotel to get some rest before our 7am flight in the morning.

Another big travel day tomorrow, a flight to Rome and then an airport change to continue on to Crete!

A Day Trip to Bonifacio Corsica

Summer in the San Juan Islands: A Travel Guide 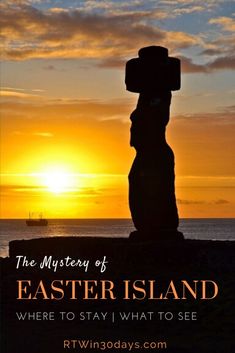