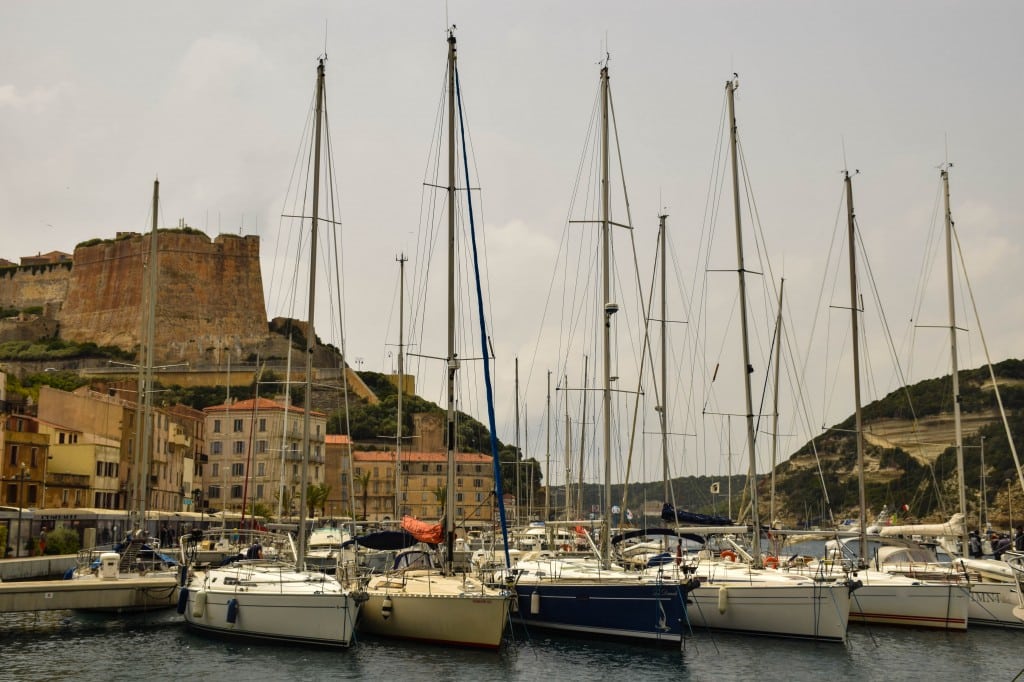 Inside: How to get from Sardinia to Corsica by ferry. Plus: the best things to do in Bonifacio.

So now we have finally arrived at the “Med” portion of the “Moscow to the Med” 30-day summer trip and I couldn’t be happier!

For the next two weeks it’s all about the islands of Italy, France and (mostly) Greece. We have three nights and two full days in Sardinia which is not even close to enough time to see this very large and diverse island.

So what do you do when you’re already short on time to see one destination?

Add in a full day trip to a completely different destination, of course! (On paper, this logic somehow made perfect sense.)

We decide to squeeze in a day trip to the neighboring island of Corsica because it seems too close to pass up. And in our defense, on the map it is right there, just begging for a side trip.

Who are we to argue?

Just a 1-hour ferry ride from Santa Theresa Gallura on the northern tip of Sardinia, the stunning town of Bonifacio Corsica makes for a terrific day trip if you’re staying on the northern end of the island, as we are in Olbia.

Sardinia is big enough that it needs two airports, one in the south and one in the north.

Shannon and I had decided to stick to the northern end of the island primarily because we are hoping to visit Corsica while in the neighborhood.

After a quick connection in Rome from our last stop in Vilnius, we arrive at our hotel, the Hilton Olbia (another great use of Hilton points!), just before midnight after picking up our rental car at the airport.

The guy working the rental car counter at the airport is so happy to see us (we are obviously his last reservation of the night) that he offers to lead us right past our hotel on his drive home. A nice touch since it definitely saves us some navigation time at that late hour.

Our rental car is one of those itty-bitty Smart Cars and remarkably, I’ve never driven one before.

It’s more of a pocket-sized, “isn’t that adorable” kind of car than an actual car. And it was touch and go as to whether we could get our luggage loaded into what passed for a trunk (and remember, we’re only traveling with carry-ons…what do people with real luggage do with this car?).

The plan for tomorrow

We booked a 10:00am ferry over to Bonifacio with a return at 5:00pm figuring that would be enough time to see the sights.

On our map, it looks like the ferry terminal in Santa Teresa Gallura is pretty close to our hotel so we’re hoping for a little extra sleep in the morning after our long travel day from Vilnius.

But no such luck. When we inquire at the hotel what time we should leave for a 10:00am ferry, the front desk clerk says it will take us about 90 minutes since the road to get there is of the windy, mountain variety.

So much for sleeping in.

The drive from Olbia to the ferry terminal

The next morning we’re somewhat rested and off to do some adventuring!

Since our ferry tickets say we need to check-in 30 minutes before departure and the drive takes 90 minutes, we leave the hotel in Olbia at 8:00am. We hop in our ridiculously tiny rental car and begin weaving our way through the mountains under overcast skies.

Since I’m basically driving a golf cart with an airbag, curvy mountain roads full of aggressive Italian drivers aren’t my idea of a good time.

Additionally, the Smart Car has an endearing feature where if you should decide to stop for even a second – like, say, at a stop sign – it assumes you’re done driving and shuts itself off. This is called “eco mode” and I don’t care for it. Luckily, it can be switched off but you have to remember to disengage it every time you start the car.

The ferry ride from Sardinia to Bonifacio

Amazingly, we make it to Santa Teresa in just over an hour and find the port without any trouble despite the aforementioned automotive challenges.

The ferry ride is an enjoyable 60 minutes and in no time we are docking in the impossibly gorgeous French harbor of Bonifacio, Corsica.

Tip: The best site for checking schedules and booking ferry tickets in Italy and France is FerryHopper.com.

Unfortunately, the gray skies persisted overhead but it doesn’t dampen our spirits to venture out and explore the town.

What is Bonifacio known for?

Bonifacio is Corsica’s oldest town and was founded as a fortress by Boniface of Tuscany in 828.

The geographical location of this medieval city is truly remarkable. Townhouses 5 to 6 stories high and just one room wide are literally perched right on the edge of the cliffs. It seems an absolute wonder that they haven’t managed to slide off the cliff into the turquoise sea below over all these years.

This stunning seaside town is quite possibly one of the best-kept secrets in all of France.

We wander the harbor for a bit admiring the expensive yachts parked side-by-side. Then we begin the climb up the hill to see the fortified town edging the cliffs high above.

The soaring white limestone cliffs are accented by the occasional sea stack formation just offshore. When we reach the top of the hill and enter the town through an arch in the city walls we are completely charmed by its beauty.

It is immediately obvious what makes Bonifacio Corsica’s loveliest town.

Narrow paved lanes lined with shops and wafting aromas of crepes pull us deeper into the labyrinth of the town center. Arches that run across many of the lanes were originally used to carry water throughout the town. They provide a fascinating glimpse into what life must have been like so long ago when the locals’ biggest concern was foreign invasion.

As we stroll, we pass the majestic gorgeous Hotel Solemare. Oh, how I wish we had time to spend a night here to explore more!

The King of Aragon’s Stairway

After wandering the cobbled streets a bit we end up at the entrance to the King of Aragon’s Stairway. Sculpted into the side of the cliff entirely by human hands, the stairway runs in a diagonal from the town all the way down to the sea.

Legend has it these 187 steps were carved by the Aragonese in a single night during a failed attempt to invade the town in 1420.

Those 187 steps feel more like 1,187 steps by the time we climb back up them. 187 doesn’t sound like a lot but I’m telling you, each one is so steep it’s like three normal steps.

The stairway leads down to a secured pathway constructed from a natural rift in the cliff and eventually to a grotto that was once used by the locals for a supply of fresh water.

I can’t imagine having to go up and down that staircase every time you need fresh water (much less carrying it back up). But I guess that’s the price you pay for the safety and security of living in a fortified city on the top of a cliff.

After climbing back up the stairs, we reward ourselves with a little ice cream before walking over to the ruins of the battery of St. Antoine on the other side of town. Near the ruins, there is a beautiful cemetery facing the sea that reminds me a lot of Buenos Aires’ majestic Recoleta Cemetery.

Back down to sea level

After a complete circumnavigation of the old town and hiking around the top of the cliffs, we head back down to the harbor in search of a well-deserved good French meal with a sea view.

After lunch we shop for a few souvenirs. Then, it’s time to make our way back to the ferry for the short ride back to Sardinia and the long drive back to the hotel.

Though the clouds were persistent, we are at least thankful that it never rained. Our trip over to Bonifacio Corsica was a terrific way to spend a day in Sardinia.

And as we sail away, we enjoy our last sweeping views of this fortified town on a cliff.

Tomorrow, back to the business at hand…seeing the actual island of Sardinia!