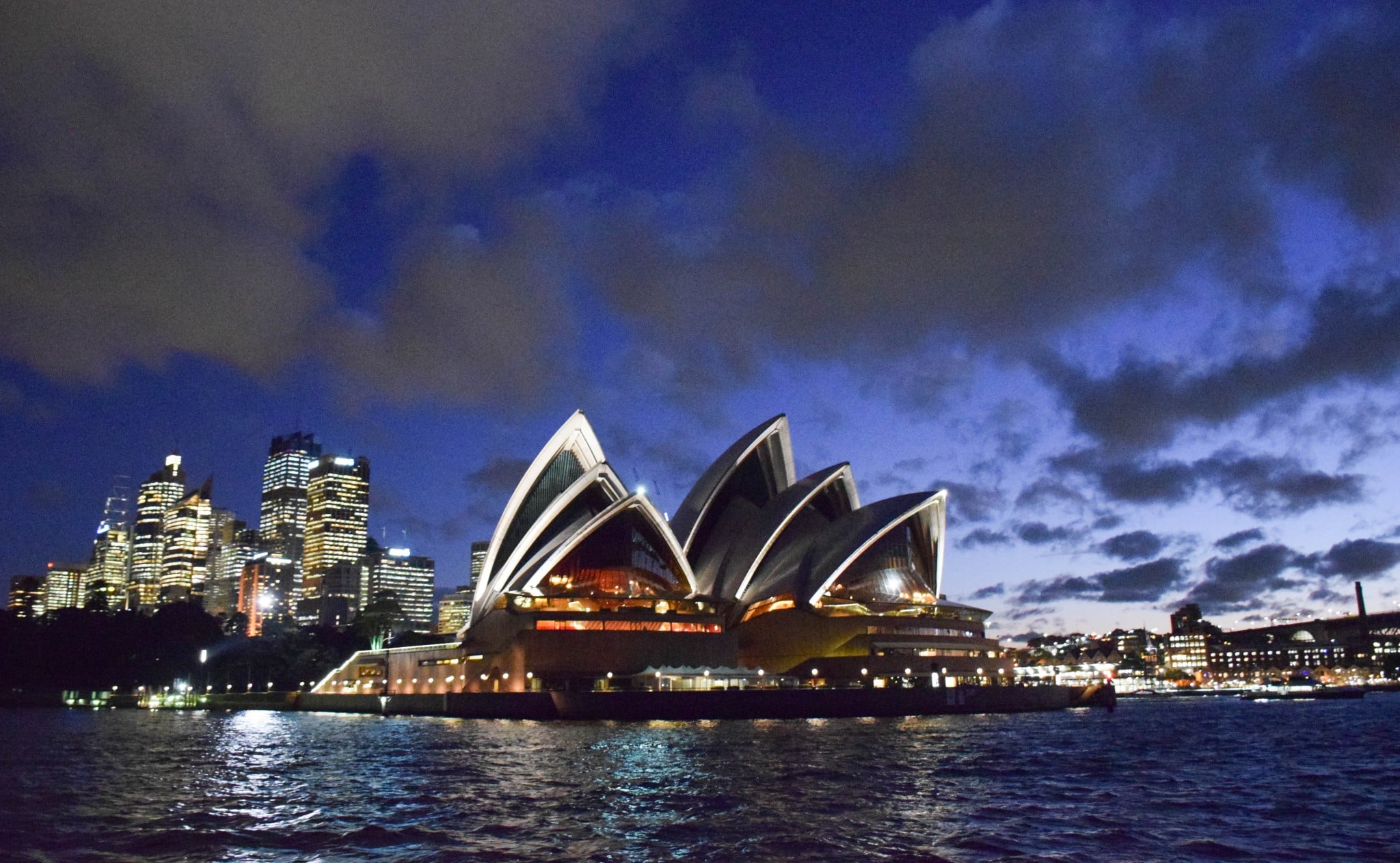 Inside: Sydney, Australia is one of the world’s greatest cities and there’s plenty to see and do. Here’s how to make the most of just 48 hours.

I just love Australia. I really do.

Kangaroos, koalas, beaches, mountains, reefs. And to top it off, friendly locals with adorable accents. Oh right, and more things that can kill you than any other country and/or continent in the world.

Pythons swallowing crocodiles, dingoes eating sharks (I kid you not, I saw an actual photo of this). Yes, it’s a virtual predator free-for-all Down Under.

The magnificent city of Sydney is the shining jewel of the southern hemisphere. Luckily, it’s also noticeably absent of predators. So I never miss a chance to stop by, even if it’s just for a few days.

And since my darling husband Dave has yet to venture to the Land of Oz, it’s an absolute must-do on our Round-the-World honeymoon journey.

And, as if I needed any more reasons to visit Australia, since my mind-blowing trip to Antarctica on Round the World #8, I now have a lovely assortment of friends in the greater Sydney area.

Read More: Expedition Antarctica: Why it’s Worth Every Penny

I adore visiting those Aussie pals whenever possible. Most notably, my good friend and regular travel buddy, Angela. She lives about 2 hours from Sydney and is always eager to play tour guide when I visit.

Angela made the long journey to Italy for our wedding two months ago and Dave and I are both looking forward to seeing her again. I’m also excited to meet up with the rest of the Antarctica gang for dinner and finally introduce Dave to my polar buddies.

But with just 48 hours in Sydney, I know we’ll have to make the most of every minute.

Where to stay in Sydney

With an awesome week in South Korea behind us, we land in Sydney at 8:30am Wednesday morning.

Just over an hour later, we arrive at my favorite Sydney hotel, the Hyatt Regency Darling Harbour.

Not only is this hotel the largest in Sydney, but it’s also the largest in all of Australia. It also happens to have spectacular views of Darling Harbour. (Book a harbor view room here on Australia Day for a postcard-perfect view of the fireworks!)

We check in, drop our bags and head out to enjoy the day.

For Day #1 we have a pretty relaxed schedule planned. I’m going to treat my new husband to my own personal guided walking tour of Sydney.

We begin in Darling Harbour and then head along Pitt Street through the city’s main pedestrian shopping zone. Eventually, we work our way over to Sydney Harbour for lunch. And to admire the view of the city’s most iconic sights, the dazzling Opera House and soaring Harbour Bridge.

One of the best things to do in Sydney is to climb the Harbour Bridge. Sydney’s famous Bridge Climb is a must on any visit. But since I did the climb on a previous trip and Dave’s not a huge fan of heights, we give that a pass for today.

It’s a brisk day but luckily Sydney’s winters are relatively mild and our light jackets were sufficient. After lunch, we take a walk through the nearby botanical gardens. And then we stop for a happy hour drink in The Rocks before heading back to the harbor for today’s main event.

It’s always been a dream of Dave’s to sail on a pirate ship.

Unfortunately, (and much to his chagrin) he is not, in fact, a pirate. Details.

While planning our stop in Sydney, I came across a Sydney Groupon for a tall ship dinner cruise around Sydney Harbour. I couldn’t pass up the chance to make his swashbuckling dreams come true (score another one for Groupon).

In his defense, it was pretty cool. Definitely pirate-ship-worthy.

We board the ship along with 30 or so others and set sail toward the Opera House. The setting sun is just beginning to slip below the horizon.

As we cruise – cocktails in hand – our captain provides fascinating commentary about the history of the harbor and many of the landmarks along the way. But perhaps the most interesting history is that of the tall ship itself.

Our ship sailed from Europe into Sydney Harbour in 1988 as part of the Australian Bicentenary. The bicentennial year was celebrated with great pomp and ceremony. But the highlight was an Australia Day reenactment of the 11 ships of the First Fleet of British convict ships.

These ships founded the city of Sydney and the colony of New South Wales in 1788.

After the celebration, the ship remained in Australia. Today, it gives visitors a chance to experience Sydney Harbour aboard an authentic wooden tall ship adorned with billowing sails. It’s a magnificent way to see the harbor. The views of the Harbour Bridge and the Opera House are simply spectacular.

Unfortunately, once night falls, the temperature quickly follows suit. So we spend much of the latter part of the cruise below deck. Still, it was a thoroughly enjoyable night and “Pirate Ship Ride” has now been officially checked off Dave’s Bucket List.

The Bondi to Bronte Coastal Walk

The next morning Angela arrives in town and picks us up for a ride out to Bondi Beach.

The weather has improved since yesterday and the sun is shining brightly. Angela scores a parking space just a few steps from the expansive sands of Australia’s most famous beach.

Though you can easily pass an entire afternoon just soaking up the sun on Bondi, Angela suggests we check out the Bondi to Bronte Coastal Walk.

It’s a gorgeous day for a walk. But since we’re a little short on time we turn back near Tamarama and make our way back to Bondi to find a good spot for lunch.

After a relaxing seaside lunch, we deferred to Angela’s next suggestion and head over to check out a little Aussie wildlife at the Featherdale Wildlife Park.

Because when you’re visiting the country with the highest concentration of things that will kill you it’s perfectly logical to go to the place where they keep all of those things conveniently under one roof.

The award-winning park is home to the world’s largest collection of native Australian animals (more than 2,200!). It seems like the perfect place to get in some quality time with koalas, kangaroos, wallabies, etc.

After all, you can’t come to Australia and not meet a koala. Or apparently any number of more lethal, but less cuddly creatures.

It turns out to be a good thing we have a local driving us around. Because the park is a good bit outside the city and not so easy to find. But it’s definitely worth the 40-minute trip.

Most of the animals are kept in open enclosures. So we are able to get lots of one-on-one time with some of Australia’s furriest residents.

We see wombats, emus, and countless indigenous birds. And we even get to feed kangaroos and wallabies. And yes, we also see a few of those dreaded deadly creatures like crocodiles, snakes and Tasmanian devils.

But, of course, the highlight is getting our photo with a (sleeping) koala.

By the time we finish at Featherdale, it’s time to head back to Sydney and get ready to meet the rest of the Antarctica gang for dinner.

We head back to Sydney Harbour to the Opera Bar, one of my favorite spots for evening cocktails with a killer view. It’s just wonderful to see so many great friends from the ship. (Sidebar: it’s crazy how a trip to Antarctica can so tightly bond complete and total strangers in a little over a week.)

They are all excited to meet Dave and we have a ball catching up over good food and a few adult beverages.

It’s been a fantastic two days in Sydney. I just wish we had more time to spend in Australia (I really want to make it out to Uluru one of these days!).

But, of course, there’s no doubt we’ll be back. I’m not sure you ever get enough of Australia.

Read More: How to See the Whitsundays & Great Barrier Reef (even on a budget!)

But for now, the Round-the-World honeymoon continued and it’s time to move on to another country I never get enough of. The tropical islands of Fiji!