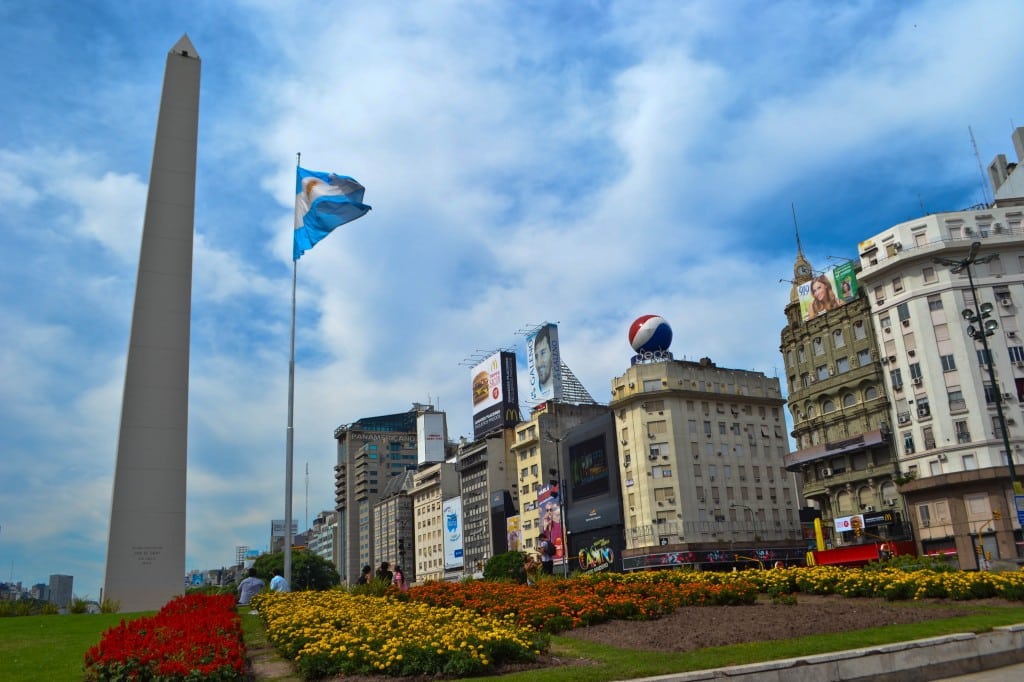 Seven years ago this week, I touched down in Buenos Aires, Argentina for the first stop on a trip around the world that would forever change the course of my life.

Who knew that seven years and more than 100 countries later, I would again arrive at Ezeiza Airport, this time a confident and far more worldly traveler, perhaps even worthy of the title “globetrotter.”

On my last visit to this blazing hot South American capital, I enjoyed long runs in Palermo Park, a stroll through Recoleta Cemetery and great meals along the revitalized waterfront area. This time, I didn’t really have a plan in mind. In fact, Buenos Aires was honestly just a bonus stop on the way to my ultimate goal, Ushuaia and Antarctica.

I have to be in Ushuaia, Argentina for my cruise departure on January 9th and the only frequent flier mile availability into Argentina was flying into B.A. on January 5th. So, here I am, with two days to re-discover the city that started it all for me on RTW #1.

The first thing that surprised me about Argentina during my planning stages was the new “reciprocity fee” of $160 that has to be paid online before arrival (as of December 28, 2012). You must show proof of this payment on arrival. I’d read that online and had taken care of it the week before departure but on the plane I got another shock when I read over the latest customs declaration arrival form the flight attendant handed me.

If I’m reading it correctly (and someone please weigh in in the comments if I’m misinterpreting this, because I really hope I am), Argentina will now charge arriving passengers a 50% fee on any electronics (laptops, cameras, etc) valued at more than $300.

There is a space on the form to declare your cell phone so they don’t charge you for that but you must list your laptop, camera, ipad and any other electronic devices that were purchased outside the country and declare their value. For anything over $300 (and seriously, find me a laptop that is worth less than $300?) you must pay a 50% fee on arrival.

I was shocked at this (I am carrying a laptop, ipad, Nikon DSLR camera, waterproof camera and a GoPro camera) and inquired with the flight attendant as to whether I was reading this correctly. He told me that yes, I was correct, and that a number of the South American countries had instituted similar policies in recent years. He said Peru was especially strict and that he’d even seen passengers have their ipads confiscated at customs if they didn’t declare them. What!!??

I couldn’t believe it. But I listed everything I had on the form, underestimated their value as far as I thought I could get away with and was prepared for the worst at customs. Yet, surprisingly, the customs officer never even took my form as I passed through the security check. He was on the phone and looked busy and I placed the form on the pile with the others and kept going.

I’m not sure I could get away with that a second time and I’m a little worried about going through Argentinian customs again on return from Antarctica and Patagonia. If I ever visit Argentina again I’m definitely going to think twice about how much camera gear I bring.

It just seems amazing to me that they can charge you for personal electronic items you’ve already paid for and have no commercial purpose. But I guess it’s their country, they can do what they want. Visitors, of course, have the choice of whether to come. (2014 Update: I’ve since been assured this only applies to citizens of Argentina but be warned that is definitely not specified on the customs form.)

Once I finally exhaled after passing customs, the next thing I realized immediately is that Buenos Aires is no longer the “budget” destination I lovingly remembered. One of the things I always do before arrival in a new country is check online to see what the going rate is for a taxi from the airport into the city center (or to see if there’s a train, shuttle, etc since airport transfer costs can really add up over the course of a trip).

My research on the airport’s website revealed that an airport taxi would cost about $30 using the official taxi service. I then checked the taxi service’s website which quoted $38. When I got to their desk at the airport it was actually $45. Probably a sign that prices are rising too fast for the internet resources to keep up (not exactly an encouraging sign).

When I finally got into town and checked into the Sheraton Libertador Hotel, I was excited to see that it was in an excellent location just a block from lively Florida Street and few blocks from the world’s widest avenue, Avenida 9 de Julio.

I spent the day on Sunday walking all over the western half of the city – Florida, Avenida 9 de Julio and mingling with the enthusiastic afternoon crowd of cyclists and dog-lovers gathered around the city’s most famous landmark, the Obelisk, in the Plaza de la Republico.

The obelisk was completed in 1936 to commemorate the 4th centenary of the first founding of the city. To enrich the area surrounding the national monument, the government later began a project to add large LED signs to create an atmosphere similar to Times Square or London’s Piccadilly Circus.

I then strolled around Plaza de Mayo and the governor’s mansion before heading over to the Puerto Madero waterfront area for dinner. One of my favorite parts of the waterfront area is the striking Puente de la Mujer or “Women’s Bridge” designed by Spanish architect, Santiago Calatrava. The bridge has a unique asymmetrical design and also operates as a swing bridge. The Puerto Madero area has a number of streets named after women which provided the inspiration for the bridge’s name.

For my last full day in the city, I decided to recreate my first experience. I got up early and headed out to Palermo Park for a run. It was a little closer to the Sheraton than it was to the Park Tower, where I stayed on my last visit, but still a pretty good 6-8 mile round-trip run.

Later, I made a return visit to Recoleta Cemetery, final resting place of Eva Peron. It’s really quite a beautiful cemetery right in the heart of the city. In addition to Peron, it also contains the graves of many other notable Argentinians including former presidents, a Nobel prize winner, the founder of the Argentine Navy and even Napoleon’s granddaughter.

After that I had ice cream for lunch (don’t judge me, I’m on vacation) and did a little last-minute shopping for Antarctica before heading back to the hotel to wrap up some work.

Tomorrow, it’s on to Ushuaia, the southernmost city in the world!