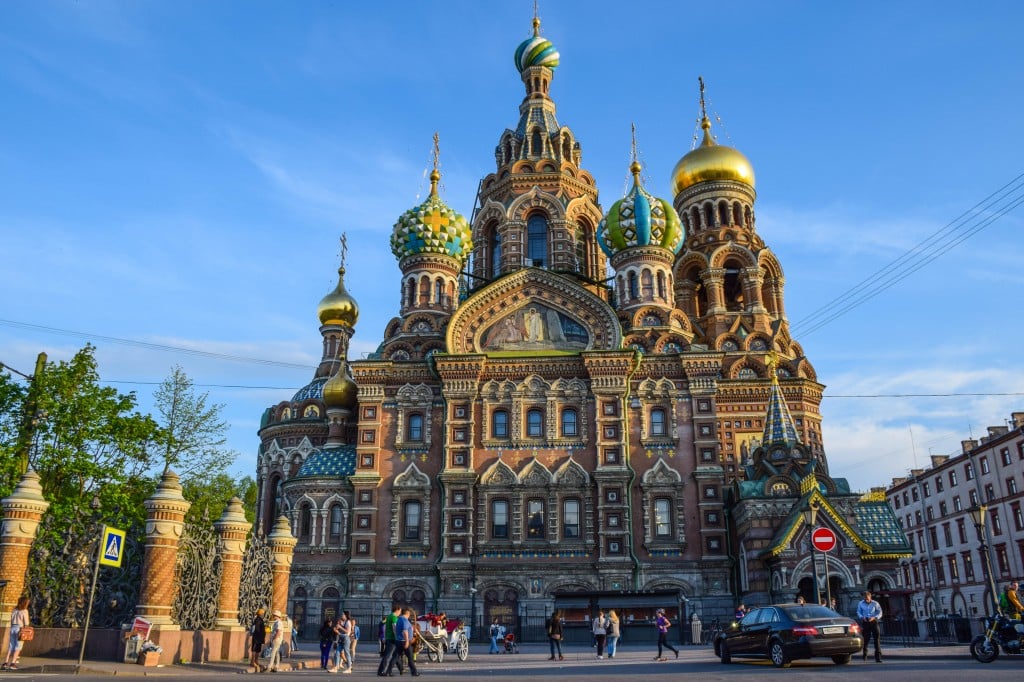 Often considered the nation’s “Window to the West,” the opulent city of St. Petersburg Russia is arguably one of the European continent’s most enchanting. Built on a swamp by Peter the Great in the early 18th century, the city encompasses more than 100 islands connected by a latticework of canals, rivers and streams rivaling the elaborate canal systems of Venice or Amsterdam.

Though the city is a popular destination with both Russian and international visitors today, St. Petersburg has an intriguing and often tumultuous history.

It was St. Petersburg residents who incited the Russian Revolution ushering in 70 years of communist rule before changing course and leading the charge decades later for democracy. The Bolsheviks renamed the city Leningrad and it wasn’t until the 1991 collapse of the Soviet Union that St. Petersburg regained its original name.

Built mostly by Italian architects, St. Petersburg’s baroque cathedrals and gilded palaces give the city a decidedly luxurious feel. Every gate seems adorned with gold, every church bejeweled with glittering mosaics. It’s easy to feel like royalty as you stroll the well-manicured streets of Russia’s cultural capital.

The train from Moscow to St. Petersburg was by no means a steal ($140 US) but it was a perfectly pleasant 4-hour journey through the Russian countryside and likely preferable to dealing with airports on both ends. The modern Sapsan train makes the run between the two cities several times a day and is a great option for making the jump to Moscow’s glitzy neighbor to the north.

And it seemed we’d timed our arrival just perfectly, the springtime chill fading to the brilliant “White Nights” of summer. St. Petersburg is the most Northern city in the world with a population of over 1 million and for much of the year that location brings long winter days of darkness. However, when the city finally emerges from those months of darkness, it does so with a bang.

The summer months of May to July are world famous for their seemingly endless days of summertime sunlight, known as white nights. Though we’d arrived just at the beginning of this season, by mid-June the sun doesn’t descend below the horizon enough for the sky to grow dark at all making day and night nearly indistinguishable. So much so that the city’s streetlights don’t come on for months at a time. The white nights period is welcomed each year with a weeks-long celebration of festivals and concerts drawing visitors from all over the world.

The hotel options for St. Petersburg fell into two categories: expensive or uninspiring. So, for our 2-night stay in the city, Shannon and I had booked an apartment through Airbnb.com instead. Though apartments sometimes have a minimum stay requirement of 3 or 4 nights, I’ve found more and more lately that are willing to rent for as little as a single night, just like a hotel.

Of course, you do have to remember that Airbnb charges a small service fee on top of the owner’s rate but the rates for apartments are often so much lower than hotels that even with the fee you still come out ahead.

After emerging from the train station around 5:30pm we transferred to the metro for the short trip to the apartment. I was almost a little disappointed to realize that everything on the signs in both stations was in both Russian and English. I admit I kind of enjoyed the deciphering skills needed to navigate the Moscow metro. But since St. Petersburg receives more international visitors than Moscow (primarily due to its starring role on many Scandinavian cruise itineraries), it’s a bit more tourist-friendly.

When we arrived at the apartment to pick up the keys from the owner, we were excited to discover it was just as beautiful as advertised! And since it was a one-bedroom apartment with another sofa-bed in the living room, we had far more space than even the most expensive hotel options, not to mention a killer view of the Neva River, a full kitchen, wifi and a washing machine…all for the very reasonable price of $113 per night.

By the time we settled in at the apartment it was nearly 7pm but thanks to St. Petersburg’s summertime white nights we knew we still had several hours of daylight left to start exploring the city.

We left the apartment and followed the pedestrian path along the river to the Hermitage and Palace Square. One of the most famous art museums in the world, the Hermitage is housed within the Winter Palace and home to more than 2.7 million exhibits. Since the museum closes at 6pm, we’d have to come back the next day to see the inside but the exterior was nothing short of spectacular.

From there we took a stroll down the city’s most popular street, Nevsky Prospekt, in search of St. Petersburg’s most colorful attraction and the one I was dying to see…the Church of Our Savior on Spilled Blood.

Located on the Griboedova Canal, the church stands on the spot where Emperor Alexander II was assassinated in March 1881. It was built between 1883 and 1907 primarily with funds by the Imperial family and thousands of private donors.

When we got our first glimpse of the church’s golden onion domes from across the canal it was absolutely dazzling. Every inch of the exterior is decorated with incredibly detailed mosaics designed by the most prominent Russian artists of the day. You could spend hours and hours staring up at it and examining every ornate window, arch and dome. Simply spectacular.

But while the church was an eye-catcher in the light of day I was, of course, dying to photograph it at dusk. Unfortunately, we still had a few hours to kill before sunset at 10:45pm. So we wandered the streets nearby in search of a good restaurant to give Russian cuisine another shot.

We managed to find a good one along the canal and tried a few local menu items as well as the locally popular Russian champagne (which wasn’t bad!).

As the sun finally sank into the horizon, we waited patiently for that perfect dusk lighting. It usually takes 30-40 minutes to get the best light but here it took until nearly midnight before the sky deepened to just the right shade of blue.

After photographing the church to within an inch of its life, we finally began the walk back to the apartment a little after midnight and managed a few hours of sleep before the summer sun woke us bright and early the next day.

For our only full day in St. Petersburg, we had a rough plan of attack.

First, a look at the inside of the church we’d stood in awe of the night before. Like most things, the church had been closed by the time we arrived the night before so it was at the top of our morning to-do list. And the interior of this massive work of art did not disappoint. Unlike the dissected interior of St. Basil’s Cathedral, this one had a cavernous chapel covered from floor to ceiling in brilliant mosaics. We wandered for a while staring upward at the intricate ceiling before finally moving on.

Next on our list, the Hermitage. Though we knew it was a gigantic museum that would take days to fully explore, we thought we could at least try to make time to see a bit of it while we were here. Unfortunately, when we arrived at Palace Square and located the correct entrance, we were devastated to discover it was closed on Mondays.

Since we were flying out at noon the next day, we wouldn’t get a chance to see it at all. A huge disappointment but a reason to come back to St. Petersburg again someday, I guess (as if I needed one).

The Canals of St. Petersburg

With the Hermitage ruled out, we found ourselves with a little extra time on our hands. We’d been eyeing the multitude of canal tour boats since we arrived and decided it would be a great way to cover a lot of ground in a short amount of time. It did, however, prove to be quite a challenge to find a boat tour in English.

We spent a few hours walking from dock to dock only to be told again and again that tours were only offered in Russian. We managed to find one English-language boat tour online at 4pm and luckily found the right dock just in time to hop aboard.

The boat wound its way through the narrow canals of the city while the guide narrated points of interest along the way. We had again lucked into a gorgeous sunny day so cruising the canals lined with colorful baroque buildings was a great way to spend an afternoon.

Two hours later, we arrived back at the dock feeling pretty satisfied that we’d seen as much of St. Petersburg as possible with our time constraints. After doing a little shopping we headed back to the apartment to change for dinner and enjoyed an amazing sunset right from our window.

Of course, since we couldn’t leave the sunset view, it meant that we didn’t head out in search of dinner until after 11pm. The endless daylight can be a little disorienting. Midnight feels like 7 or 8pm and it’s difficult to tell yourself it’s time to go to sleep when the sun has barely just set. Oh, and remember, it’ll be right back to greet you at 4am-ish the next morning.

But I can certainly see why St. Petersburgers revel in their white nights. After so many months of constant darkness, it seems only right to celebrate with an enthusiastic vigor when the sun returns to stay awhile. I only wish I’d been able to stay a while longer to enjoy the White Nights festival in all its glory. But I’d gotten as much out of Russia as I would be able to on this long-awaited trip. Once again, it’s time to move on…