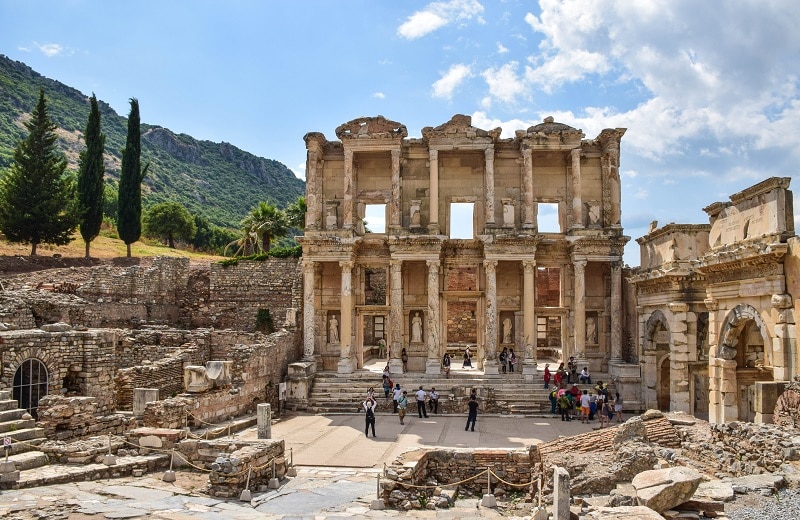 It’s been a terrific few weeks exploring the Greek Islands!

But now it’s time to truly dive in to the Turkish portion of the itinerary. First up, the historic ruins of Ephesus.

The 3-hour bus ride from Bodrum to Selcuk with Pamukkale Tours is far more pleasant that I expected.

It’s a 26-seater minibus which seems crowded at first and I think, “well, this is going to be a long ride.” But once we pull out of the station I’m able to change from my assigned seat to the back row of the bus and spread out a bit.

I even manage to get a little writing done along the way.

Oddly, the bus is quite the full-service experience.

Fifteen minutes into our drive, a “flight attendant” type person suddenly appears in the aisle handing out bottles of water. I didn’t even notice him on the bus before we left!

He then proceeds to do another round passing out packaged snacks like pretzels and chips. And then still one final round with coffee, tea and soda.

I don’t even know what’s coming next! I half expect him to whip up a casserole or something in an Easy-Bake oven. I’ve never seen this kind of service on a bus before but it’s a nice surprise. And totally worth the extremely reasonable $18 fare.

We arrive at the bus station in Selcuk right on time at 1:30pm. I figure while I’m here I should try to find the train station and get my train ticket booked to Pammukale for tomorrow.

I found a train schedule online but I’m not sure how crowded the trains usually are. So it might be best to book a day ahead, just to be safe.

Where to Stay in Selcuk

However, after getting my bearings with a map, I realize my hotel is closer than the train station. So I head there first.

When I check into the Hotel Bella, they assure me there’s no need to book train tickets ahead of time. So I happily scratch that from the plan and put my focus squarely on getting the most out of my afternoon at Ephesus.

The hotel has a terrific rooftop restaurant. After settling into my small but charming room, I head up there for tea, an overview of the town, and some information about Ephesus.

The White Storks of Ephesus

As I’m enjoying the terrific views over the town from the restaurant I am shocked to see several giant bird nests sitting at the top of seemingly every telephone pole.

I’m just about to ask what they are when I notice a detailed explanation in the hotel’s information book sitting on the table in front of me.

The birds are White Storks from Africa. They migrate 4,000 miles to Selcuk every year in late April or May to lay their eggs and hatch their chicks. They mate for life and rear their chicks together, returning to the same nest year after year.

The storks are roughly 4′ tall with a wingspan of up to 6′. They build their nests out of sticks high up on rooftops, telephone poles (as I can clearly see) and even archaeological ruins.

Legend has it that if you see a stork on your first visit to Turkey you will live in peace and happiness for the rest of your life. Since I technically visited Turkey once before (on Round the World #3), I wonder if a first visit to Selcuk still counts?

How to visit Ephesus

After watching the storks for a bit, I sit down with a cup of tea while the owner, Urdal, gives me the rundown on Selcuk and Ephesus.

He provides me with a free guide book that I can take with me to Ephesus to do a self-guided tour (my favorite way to see sights like this one). He’s taking some other guests over to the entrance at 2:30pm, about 45 minutes from now, and asks if I would like to ride over with them.

That sounds just perfect to me. Less than an hour later, there are five of us in the hotel’s van for the short ride over to the entrance to the ruins. After he drops us off, he shows us on the map where he will pick us up at the exit on the other side of the ruins at 5:30pm.

Honestly, this couldn’t be any easier!

A little history on Ephesus…

Built in the 10th century BC, the ancient Greek city of Ephesus was one of the twelve cities of the Ionian League. But most of its fame is owed to its role in Christian history.

Ephesus is one of the seven churches of Asia cited in the Book of Revelation and it is believed that the Gospel of John may have been written here.

Based on the Apostle John’s presence in the city, it is also speculated that the Virgin Mary spent her final days in Ephesus since Jesus instructed John to take care of Mary after his death. The House of the Virgin Mary sits just outside the ruins of Ephesus and is a popular place for Catholic pilgrimages.

I didn’t know much about Ephesus before this trip. But in researching Turkey and trying to plan out a workable itinerary, it seemed too significant a site to overlook. Plus it’s conveniently located between two places I definitely planned to visit – Bodrum and Pamukkale.

During its heyday, Ephesus was most famous for the Temple of Artemis, one of the “Seven Wonders of the Ancient World.” The temple was completely destroyed in 268AD leaving just one inconspicuous column remaining.

The Library of Celsus

The two most impressive (and most photographed) sites within Ephesus today are the Library of Celsus and the Grand Theatre.

The Library of Celsus was built in 125AD in memory of Tiberius Julius Celsus Polemaeanus, an ancient Greek who was governor of Roman Asia during the Roman Empire. Celsus paid for the entire construction from his own wealth and he is buried in a sarcophagus beneath it.

The library’s façade has been carefully reconstructed from all the original pieces and it reminds me a lot of the incredible Treasury building at Petra. And like the Treasury building, I can’t stop taking pictures of it.

From the library, I continue my walk down the large marble walkway past several napping felines to the Grand Theatre.

The impressive theater is believed to be the largest outdoor theater in the ancient world. The theater could once seat 25,000 people. It hosted a variety of events including concerts, plays, political and religious discussions and even gladiator fights.

After spending a little time enjoying the theater, it’s time to head toward the exit gate.

I worried that I’d need the whole day to see Ephesus since it’s such a huge site. But as it turns out, the three hours allowed between drop-off and pick-up times by the hotel are just perfect for me.

I feel like I had plenty of time to see everything that I wanted to see. Though I’m sure those with an intense interest in archaeology could spend days exploring this site.

That night I have dinner at the Hotel Bella’s rooftop restaurant. Both to enjoy the view and to spy on the storks a bit more, they are so fun to watch!

In the morning, I make the short walk to the train station. I’m easily able to book a ticket to Denizli for the 9am train.