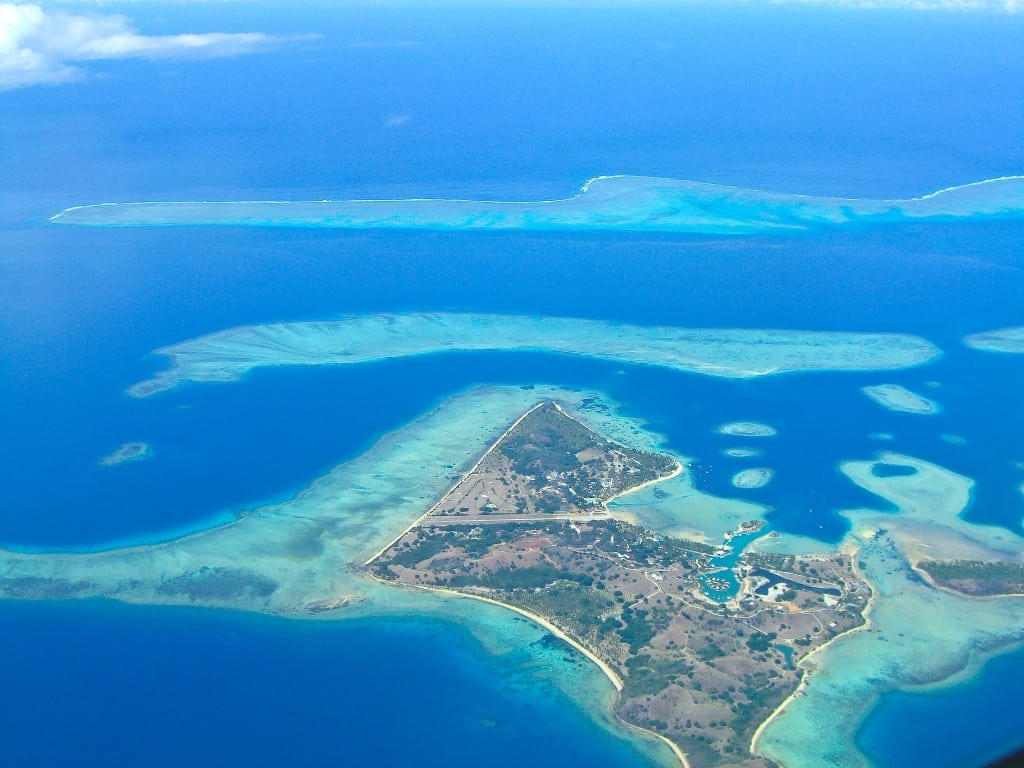 When the wake-up call came at 3:45am, I was not thrilled. But, I quickly remembered that I was getting up at that ungodly hour to catch a flight to Fiji and somehow that made it inherently more bearable.

The flight from Auckland to Nadi, Fiji was a short 3 hours (at this point in the trip that seems short). When we flew in over the crystal blue waters of the barrier reefs surrounding Fiji, I began to fully appreciate the brilliance of making this my last stop.

I had originally decided to skip Fiji after finding that the hotel prices were upwards of $400 a night for the places I wanted to stay. However, in early December, the tiny island nation of Fiji made international news when its government was overthrown in a military coup. Tourists were evacuated off the islands and the tourism industry took a major hit.

Now, I realize most people would avoid a destination for a while after this type of event, but to me, the whole situation just reeked of opportunity.

Just before Christmas when the situation had normalized, I checked the hotel rates again and was delighted to see that the same resorts I had checked earlier were down to around $150 a night…much more reasonable. It’s amazing what a little political strife can do for hotel rates.

After thorough research online about the current political stability and checking for any further travel advisories for the area (there were none), I booked the hotel and a flight from Auckland.

Once off the plane, I was greeted with an energetic “Bula!” (the traditional Fijian greeting) by a driver from the Sheraton. We hopped in the car for the 20-minute ride to the resort.

The Sheraton Fiji Resort is actually made up of three properties, two Sheraton resorts, and the Westin Denarau Island.

All were about the same rate and I had trouble deciding between the three. I eventually decided on the Sheraton Fiji since it looked like it had the nicest beach. It turned out to be the best of the three.

The rooms were a little dated in décor, but mine had a balcony with a perfect view of the beach and the stunning Fijian sunset.

And after taking a walk around all three properties, I realized mine was the only one with a good beach. The other two had rocky shorelines or black sand volcanic beaches that were too hot to walk on during the heat of the day.

But the beach outside my room was fantastic and I spent the better part of the next two days just relaxing and doing a whole lot of nothing. Absolute bliss.

Why didn’t I think of this for my first Round the World trip? I ended with Beijing, Tokyo and Seoul last time…what the heck was I thinking?

I’m sure there were a ton of things to do on the islands (like day trips to the Yasawa and Mamanuca Islands). If I’d had more than two days I probably would have gotten to them but I couldn’t tear myself away from the lovely beach right there at the resort.

Amazingly, I pretty much had the entire place to myself.  The beaches, pool and restaurant were mostly deserted with just a few other tourists at my resort. It was kind of surreal to look down the beach in the middle of a beautiful sunny day and not see another soul except for hotel staff.

It was like my own private resort. And after all of the tourist-ridden places I’ve been in the past month it was exactly what I needed.

After two luxuriously sunny days, I headed to the airport for the first of 3 flights to get me back home.

It’s been another amazing Round the World trip but I’m learning that the more times I go around the world, the more places I want to see. A big thanks to everyone who followed along this year.

Fear not, plans are already in the works for Round the World #3!

55
We use cookies to ensure that we give you the best experience on our website. If you continue to use this site we will assume that you are happy with it.OkPrivacy policy