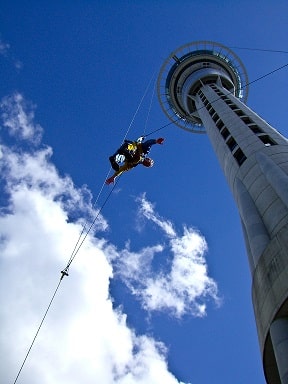 After arriving late the night before after our drive across the north island from Wellington, the next day started earlier for me than for my friend and Kiwi-travel-buddy, Kay. I had to get up to return the rental car before 8:30am about a mile from the hotel.

When I got back to the Hilton, I stopped at the concierge desk to inquire about our time to do the Auckland Harbour Bridge Climb. On the way back from dinner the night before we had asked about it but it was too late for the concierge to call and get us a reservation so we had to wait until morning.

As you may remember, in Sydney I really wanted to do the Harbour Bridge Climb but it was sold out every day I was there (thanks to the Australia Day holiday).

In reading about Auckland, Kay and I discovered that Auckland offers a similar experience on their Harbour Bridge and we were both excited about doing that.

Luckily, the concierge was able to get us a reservation for 11:30am that day so I went back up to the room to wake Kay up and tell her we had an appointment with a bridge. The company that does the bridge climb also offers bungy jumping off the Harbour Bridge, we decided to skip that.

I still don’t understand why anyone would jump off of a perfectly good bridge. Fortunately, Kay and I were both on the same page regarding bungy jumping – definitely not for us.

When we got to the Bridge Climb Auckland office at the base of the bridge, we signed the waiver and were suited up with jumpsuits and a climbing belt. You can’t take anything up on the bridge with you because of the danger that it could fall into the traffic below; this includes cameras, hats, etc. Our guide explained that we would be hooked by our belts onto a wire running the span of the bridge, then went through a few safety procedures and a little history and off we went.

Unlike the Sydney climb, you start out in Auckland on a relatively flat portion of the bridge which gives you a little time to get used to the whole idea of being on a bridge while NOT in a car. It was a gorgeous sunny day but it was extremely windy up there on the bridge.

During the climb, you have to hold onto the belt attaching you to the guide wire with your right had so it doesn’t catch on anything which only leaves you with your left hand to hold onto railings. Most places this wasn’t a big deal and you still felt fairly secure within the railings on the catwalks.

But, when you were climbing up through the rafters of the bridge and out onto the very top looking WAY down onto traffic and the water, holding onto railings with both hands certainly would have been the preferred method.

Kay and I both were a little nervous when we got all the way to the top and out in the open. When our guide said that we could stay up there for a little while and enjoy the view I thought, “Okay, lovely view over here, stunning view over there – done. Can we go down now?“

But we stayed up there for a bit and our guide took pictures for us which they were then happy to sell to us later (just like zorbing yesterday).

The whole climb took about an hour and a half and it was good, clean, exhilarating fun. I’d still like to do the Sydney climb someday since it’s a longer and higher climb, but this was definitely a good second.

After our bridge climb, our next stop was Auckland’s famed Sky Tower.

Standing 4 meters higher than the Eiffel Tower, the Sky Tower is the tallest tower in the southern hemisphere and the most prominent feature in Auckland’s skyline. And this being New Zealand, you obviously have the option of visiting it or jumping off of it.

I’ll let you guess which one we chose. Now, if you’re starting to think there aren’t any structures in New Zealand they aren’t willing to throw you off of, you’re beginning to get the picture. They take their adventure sports seriously in this country.

After deciding against the Sky Jump from the tower, we bought tickets for the observation deck and boarded the more sane method of transportation between the ground and the top deck – the elevator. The 360 degree views of the city were excellent so we decided to have lunch at the café and stay a while.

After we left the Sky Tower, we spent the rest of the afternoon wandering around the city and shopping a little. Then we found another great restaurant for dinner and followed that up with drinks at the hotel’s lounge before calling it a night.

I had a 7am flight to Fiji in the morning and Kay had plans to rent a car and drive some more of the area north of Auckland before heading back to Wellington for her flight home two days later.

It was a lot of fun traveling with Kay for the 4 days through New Zealand. We’ve already decided that we must do it again sometime. I’ve convinced her that she needs to hit Thailand at some point so maybe we’ll try to plan that one next year.