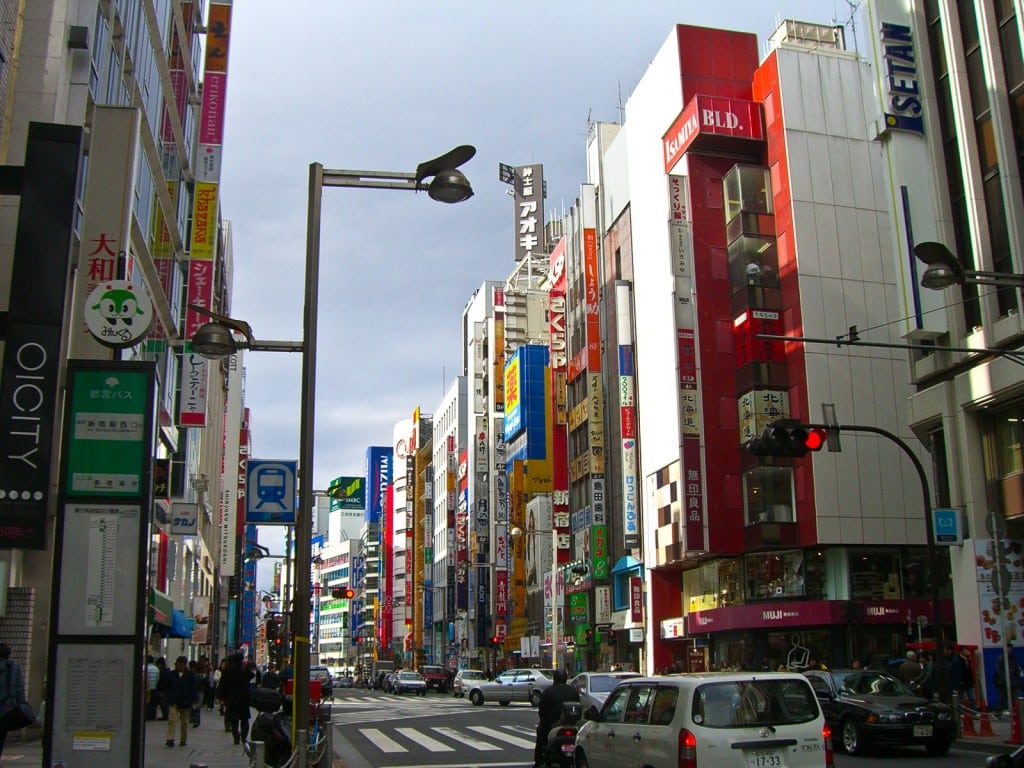 It is cold and raining heavily when I land in Tokyo around 2pm. The first thing I learn upon landing is that downtown Tokyo is FAR from Narita Airport.

The train gets you there in one hour for about $26 US. Not cheap, but I don’t even want to think about what a cab would cost. I take the train to Tokyo Station in the middle of town. I know that my hotel is in the Ginza neighborhood and from my map it looks like that is fairly close to Tokyo Station.

Being the adventurous type, I decide to strike out on my own (in the rain) to find my hotel on foot. Of course, I could have taken a cab but I hadn’t gotten any local currency yet and besides, I was feeling lucky. How hard could a 30-story building be to find?

As it turned out, harder than you might think. I made it to the Ginza neighborhood without any trouble but the actual street my hotel was on was not listed on my map.

Fortunately, every couple of blocks there were city map signs that covered the surrounding area near bus stops. Using those to navigate, I found the hotel, the Courtyard Marriott Ginza, after about 30 minutes. Without the rain, it might have been a lovely walk. Fortunately, I had an umbrella; unfortunately, my luggage dragging behind me did not.

After I checked in, I wandered around the local area for an hour until it got dark (at 4:45pm). Since there wasn’t much I could see in the rain (and even less in the dark) I decided to take advantage of this opportunity to get some much-needed sleep.

I woke up early this morning and was happy to see the sun shining brightly outside my window.

When I checked in yesterday, I had gotten the map of a suggested jogging trail to nearby Chiyoda Park so I decided to start my day with a run. I’m sure the park is more impressive in the spring when things are blooming but it was certainly still suitable for a run.

The Imperial Palace is within the park but you can’t get very close to it due to security gates. On the way back to the hotel though, I did stumble upon a lovely small little park called Hibiya. It was really scenic and there were a number of cats living in the park which was cute since I am missing my kitty at home.

After I got back to the hotel and had a shower, I headed back out to explore the city. With a little advice from the concierge, I made my way to a nearby train station to take the train to the Shinjuku neighborhood where the 150-acre Shinjuku National Garden is located.

The Tokyo metro system is extensive but one of the most complicated to navigate of all those I have ridden. There are two separate subway systems and tickets for each are not interchangeable.

Fortunately, the concierge has told me which line to take in which direction to get to Shinjuku so I make it there without much trouble. Finding the park is a different story. Once I emerged from the huge station, it took me a while to get my bearings and locate the park.

The biggest problem is that it takes forever to find a street sign in English. There are signs in English, but they are few and far between. Eventually, I made it to the park and it was much more impressive than the one I ran through earlier today. Again, there is a lot more to see in the spring when the cherry trees are blooming but it was still nice to wander around for a while.

After leaving the park, I wanted to check out the Harajuku neighborhood. The market street scene in this quirky area is known for its bizarre parade of teenagers (and older) in miniskirts and platform shoes. The hairstyles here range from spiked straight up to dyed bright pink.

It is the kind of place where you could sit and people-watch for hours and never get bored. Of all the places on this trip that I have NOT blended in, this street was in the top three.

I wandered a little, found absolutely nothing I would want to buy and headed across the street to the Harajuku train station to find a train back to Ginza.

How to Get Lost in Tokyo

I walked into the chaos of the train station and scanned the wall for one of the many train line maps in English. I was moderately distressed when I realized there wasn’t one.

Calmly, I looked for a ticket window to try to ask someone which line would get me back to Ginza. There wasn’t one of those either. All tickets were sold through ticket machines which, unlike the ones at the Ginza and Tokyo stations, did not have an English option.

On the entire trip, this is the first time I have been unable to find something written in English or someone who speaks English and I experience a moment of mild panic.

The train line that I had taken to Shinjuku earlier today did not seem to be one of the options at this station and I was about an hour’s walk from the other station. I should mention that I was very far from Ginza (not walkable) and it was starting to get dark.

There is always the option to get in a cab but I figured from where I was that would be ridiculously expensive and I didn’t have the name of my hotel written in Japanese (not my most brilliant move, I am obviously becoming overconfident in my navigational abilities) and the odds of finding an English-speaking taxi driver are very slim.

I finally spotted a train station employee at a counter and went over to ask him which line I could take back to Ginza. The only word he understood in my question was “Ginza”.  And unfortunately, that was also the only word I understood in his answer.

But, once again my luck holds and there is a woman waiting behind me who has heard our attempt at communication and breaks in with English. She spoke to the man for me and got the information I needed. It turns out that there was another station nearby with a line that runs near Ginza. I remember passing it earlier and thank her profusely before exiting the station.

When I get to the other station there is a map in English…hooray!  The line I had taken earlier is still not an option but on another line, there is a stop that I recognize immediately, Hibiyi…the cat park from my run this morning…WOO-HOO!!

I bought a ticket and hopped on the train and 7 stops later I was back in a neighborhood I recognized and vowing to run every morning from now on. I grabbed some dinner along the walk back to the hotel, did a little shopping and headed back for the night.

Last day in Tokyo and of course I started it with another morning run. I found a great US Armed Forces Radio station during yesterday’s run that’s been really interesting to listen to. Good music and interesting commentary on what’s going on with the troops stationed over there.

I skipped the park this time and stuck to the streets. I wanted to check out Tokyo Tower, Japan’s answer to the Eiffel Tower. Though it is 30ft taller than the Eiffel Tower, Tokyo Tower is not nearly as impressive architecturally. It has two observation decks and they say that on a clear day you can see all the way to Mt. Fuji.

Since it doesn’t open for another two hours, I take a few pictures and run back to the hotel. I have to check out at noon but my flight to Seoul isn’t until 5:00pm this afternoon so I have a little more time to explore.

After I checked out, I took the metro (armed with my English version of the metro map) down to the Shibuya neighborhood. According to my friend Bill, who spent some time in Tokyo a few months ago, this is the part of Tokyo that you see in the movies.

It was full of neon signs, office buildings, restaurants, and shops (including the striking new Prada store which I spent a little time in).

I wandered around for about an hour before I had to hop on the metro and head back to the hotel to get my bags and catch the Narita Express for the hour-long ride to the airport.