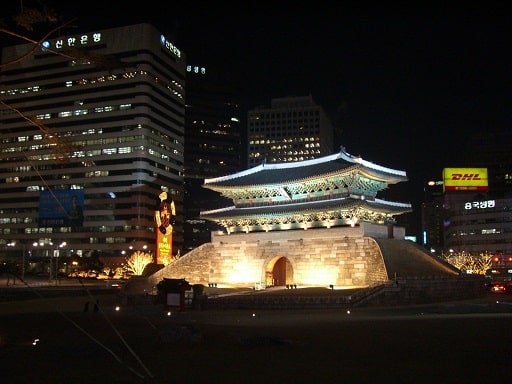 I can hardly believe but here I am. At the final destination on this incredible 30-day trip around the world.

I didn’t think any airline on this trip could surpass Air France’s First Class service but Korean Air actually did. The seat was the most comfortable one I’ve ever had and the food and wine were top-notch. It was only a 2 1/2 hour flight but I think I’m actually looking forward to experiencing a longer flight on Korean on the way home tomorrow.

And they even had one movie that I haven’t seen yet on this trip (and believe me, I have seen everything every airline has to offer right now).

When I arrive at Incheon Airport, I’m again astounded by its beauty and efficiency.

I’m starting to wonder what Asian people think when they land at a US airport. We’ve got nothing on Asia when it comes to airport design. Some of them are a work of art (Narita was the one exception – not bad, just not as fabulous as the others).

Unfortunately, when I step outside the airport I am confronted with freezing cold temperatures. According to our pilot upon landing, the temp is -10 C. That is about 8 degrees COLDER than Berlin was.

I don’t know exactly what that translates to in Fahrenheit but I know it’s not good. I’m thinking somewhere in the teens.

My transportation to the Millenium Hilton in Seoul is courtesy of the Korean Air Lines “Limousine Bus” to the city. There are 4 different lines and Line 2 goes directly to my hotel. The cost for the 40-minute ride is 12,000 Won (or about $12 US). Even better, I was able to buy the ticket while in-flight.

The bus is clean and comfortable with all leather seats and TV screens. And it’s just me and one other person for the ride into the city.

When I get to the hotel around 9:30pm, sleep is the last thing on my mind. It’s the last night of my trip and I’m determined to get out and see some of the city.

My friend Stephanie, who has spent some time in Seoul, had suggested I check out the South Gate market, called Namdaemun, which is open 24 hours a day. So I get directions from the front desk, bundle up as best I can with my limited clothing options, and head out into the bitter cold.

It turns out the market is only a short walk down the hill from the Hilton. For the first 15 minutes or so, I’m feeling pretty good. Sure, it’s definitely cold but I think I’ve dressed warmly enough to last a little while.

I make it to the market in no time and start wandering up and down the side streets to see what kinds of things are for sale. Perhaps the cold weather is keeping people inside because the market is not nearly as crowded as the hotel told me it would be on a Friday night.

After about an hour I haven’t found anything I really have to buy and my face is starting to sting from the cold. I decide it’s probably best to head back to the hotel and try this again when the sun is out.

Last Day of my Round-the-World trip!

I couldn’t sleep again last night but I’m taking that as a sign. Maybe my body is beginning the re-adjustment process to Eastern US Time. This can only be a good thing.

After a couple of hours of restless sleep, I awoke to the sun rising over Namsan Park outside my window. The city looks beautiful in the morning light and I’m anxious to get out and explore with the limited amount of time I have left.

I’m out the door a little before 9am after having breakfast in the Executive Lounge (I have saved oh so much money on this trip thanks to hotel and airport lounges) and in a taxi on my way to visit Gyeongbokgung Palace.

The concierge suggested this as my most efficient use of time since it is only a 10-minute taxi ride away. As I walk through it I am reminded of the Forbidden City in Beijing, the layout and architecture are very similar.

Read More: Beijing and the Great Wall of China

Of course, this palace is on a much smaller scale but the view of the mountains behind it really adds something.

It is still so cold outside (-14 today) that every exposed part of my skin (which is pretty much just my face and ears) is painfully cold. I don’t know how people live in temperatures like this, it makes me long for the mild winters of Atlanta.

It is literally impossible for me to stay outside longer than an hour, so after visiting the Palace, I hop in a cab back to the hotel to thaw out for a few minutes before visiting Namsan Park and the Seoul Tower across the street from the hotel.

And unfortunately, that’s about all I have time for before catching the noon KAL limo-bus back to the airport.

I walk across to the park and begin climbing the many, many stairs up to the top (how many times have I climbed stairs on this trip now??). The view is great but I’m having trouble focusing on anything but how unbelievably cold it is up here.

I last about 30 minutes before heading back down the hill to the hotel to pack (for the last time).

Not much of a visit to Seoul but I knew it would be brief. I didn’t have high expectations for the city but I was pleasantly surprised. I would really like to come back here sometime and explore a little further…that I would do so at a time when it’s warmer goes without saying.

Read More: Seoul-Mates in South Korea: From the Beauty of Jeju Island to the DMZ

Off to the airport for the long flight to LAX and then home to Atlanta.

Tomorrow, a few final thoughts on what has been an incredible month-long journey around the world!