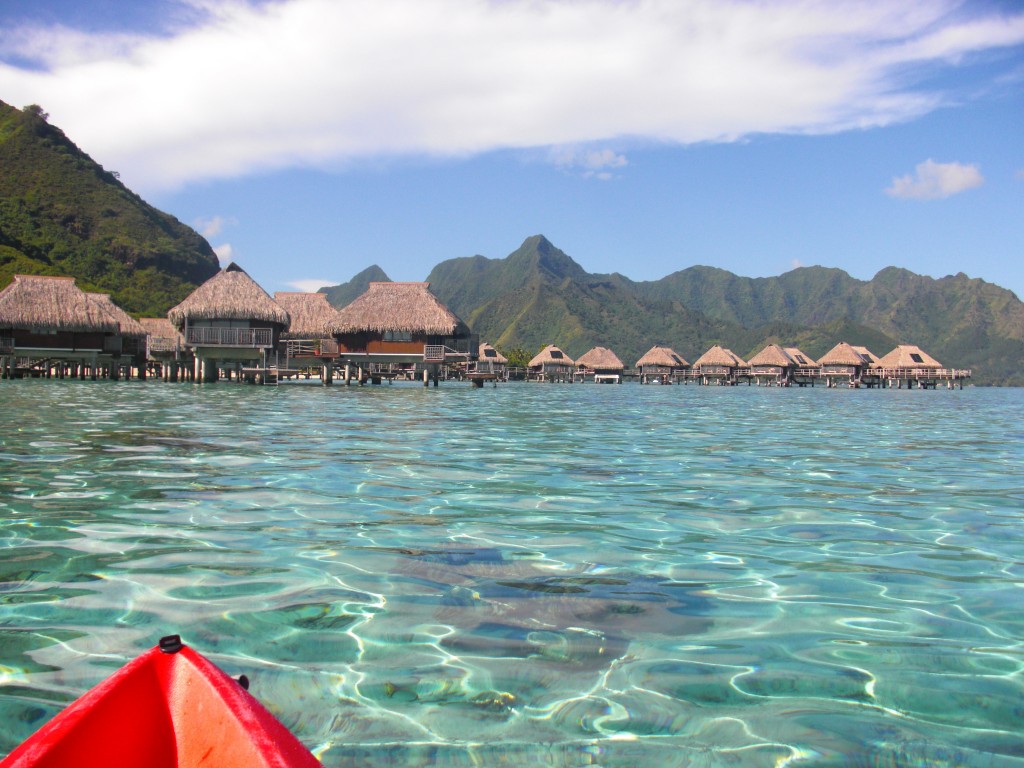 After a brief stay on the island of Tahiti, it’s time to move on to the tropical Eden I’ve been eyeing from across the channel since I arrived here in French Polynesia…Moorea.

While planning this year’s 4th annual round-the-world trip, I reached out to the only two people I know who’ve been to French Polynesia.

To my surprise, both turned up their noses when I told them I was going to Tahiti.

“Leave Tahiti as quickly as possible,” they said, “get out to Moorea and Bora Bora.”

Sounds a bit snobbish, I thought. How could Tahiti not be worth a few days’ visit?  But I took their advance and settled for just one night on Tahiti.

And today, as I board the ferry to Moorea, I’m excited to finally decide for myself which island is superior.

It doesn’t me take long.

As the ferry passes between the breakers through the Viaire pass, I get my first look at Moorea’s stunning lagoon. Now I understand what they mean.

The distance between Tahiti and Moorea is just 12 miles, but arriving at the ferry port in Moorea is like entering another world.

Moorea island is ringed by a coral reef enclosing a narrow lagoon. There are hues of brilliant blue surrounding the island that I’m not sure I’ve ever seen before in all of my travels.

It is quite possibly the most beautiful place on earth.

How to Get to Moorea Island

From Papeete, there are two ways to get from the island of Tahiti to Moorea:

I chose the ferry. Partly because it is substantially cheaper (only about $15), but also because I figure that the ferry ride will be scenic and fun (it is!).

How to Get Around Moorea

When I step off the ferry, I decide to splurge on a rental car so I can explore the island on my own schedule.

At the ferry station, there are just two rental car counters. Like everything else in Tahiti, rental cars are expensive so I bounce back and forth between the two counters hoping for a deal.

The best deal I can get for 24 hours is about $115. But considering taxis are also expensive in French Polynesia, I consider it a win.

The island of Moorea is much smaller than Tahiti, only 36 miles around the perimeter along the coastal road. It’s easy to explore in a single day with your own wheels and that’s my plan for tomorrow.

Like Tahiti, the interior of the island is mountainous and best explored by 4 x 4 vehicles which are also available for rent. Since I’m more interested in exploring Moorea’s stunning shoreline, a regular car will suffice.

Just a mile or two into my drive from the port the road climbs up a hill along the coastline and there is a spectacular lookout point over the lagoon. The Sofitel Kia Ora Moorea Beach Resort rests lazily on the brilliant white sand and the island of Tahiti looms off in the distance.

It is the kind of view that could cause you to veer off the road if you aren’t prepared for it. Even though I know it’s coming up (thanks to my guidebook), I’m still not prepared for just how jaw-dropping it is.

I stop the car and got out with my camera. I sit there for about 20 minutes just taking it all in. The stark contrast between the shallow, pale blue clear lagoon, the deep blue sea beyond the breakers, and the thatched-roof overwater bungalows of the Sofitel dotting the lagoon.

It is like something out of a movie, almost too perfect to be real. From there, it’s pretty easy to find my hotel.

There is, after all, only one road.

When I arrive at the fabulous Hilton Moorea Lagoon Resort & Spa, I am thrilled to learn I’ve been upgraded to a “spa bungalow.”

Since I’m traveling for a month, booking one of Moorea’s iconic overwater bungalows meant budget yoga above my skill level.

So I booked a standard bungalow and hoped my Hilton Diamond status would score me an upgrade. And I got lucky!

Turns out, all 106 rooms at the Hilton are bungalows but only about half of them are actual overwater bungalows. The others are considered “Garden Bungalows” but even those come with their own pool…fancy!

Before I continue, a little history of the Tahitian overwater bungalow is in order.

Moorea is believed to be the inspiration for James A. Michener’s mythical isle of Bali Hai. It’s also the birthplace of the legendary overwater bungalow.

As the story goes, a trio of California guys came to the island in the 1950’s and became known as the Bali Hai boys. They developed several hotels and are credited with dreaming up the idea for the signature hotel rooms over the lagoon.

To this day, the islands of French Polynesia are known worldwide for this unique style of accommodation.

When I enter my bungalow, it is everything I hoped for and more. I have to say, of all the hotel rooms I’ve stayed in all over the world, this one is my favorite.

From the viewing window in the floor (so addictive they are known locally as “Tahitian television”) to the private dock allowing direct access to the sparkling lagoon at any hour of the day or night, this is truly a unique experience.

Tiare flowers placed strategically throughout make the whole room smell like a tropical garden. Though the bungalows are not large, every inch of space is utilized efficiently and they are very well-appointed.

It’s my own little slice of heaven in the middle of the South Pacific.

Things to Do in Moorea

Most people come to Moorea to relax and do nothing at all. And luckily, the main things to do in Moorea don’t require much effort.

Extending for what seems like miles in every direction, it’s a 4ft-deep clear blue aquarium filled with colorful coral and exotic tropical fish. The water is so clear I can almost see the fish just as well from my deck as I can underwater in snorkel gear.

It’s easy to spend days snorkeling, kayaking, or simply walking around in the lagoon and that is, by far, the island’s most popular activity. The convenience of my own private dock to enter the water – complete with snorkel gear and a freshwater shower – makes it almost impossible to stay out of the lagoon.

But who would want to? I spend as much time there as I can. But eventually, it seems prudent to tear myself away to explore the rest of the island.

I leave the resort and drive inland up to the Belvedere lookout point, the island’s highest point accessible by car.

It’s a steep, winding, and mostly unpaved road. I’m not entirely sure my little car will make it. But, thankfully, it does. And the views are worth leaving the lagoon. Gorgeous panoramic vistas in every direction.

Like everything else on this island, it’s simply breathtaking.

I spend the rest of the afternoon following the coast road around the island stopping to savor every beautiful cove and inlet.

Tip: If you decide not to rent a car, there are several island tour options to explore Moorea by 4×4 vehicle:

The Price of Paradise

On the way back to the Hilton, I pick up a few groceries at the local market. Food at the hotel is quite expensive plus I love local markets! Even at the markets, though, I’m surprised at how expensive everything is.

So far, everything from a Diet Coke to a taxi ride is 4 times what it costs anywhere else in the world. Restaurant meals (even at lunchtime) are a minimum of $30-$35. So, I mostly avoid restaurants and stick to the markets and to-go food.

I mean why dine out when I have the best view of all from the balcony of my bungalow?

I am, however, extremely happy that I brought a bottle of wine with me from my last stop in New Zealand (a glass of wine can easily run $20).

Read More: One Day in Auckland with the Kiwis

I’ve done so well on the trip budget this year that it pains me to overpay for every little thing. But I try my best to forget about it and focus on the beauty of my surroundings.

Nobody wants to be cheap in paradise.

Later that day, it is sadly time to leave Moorea and head back to Tahiti. This time I take the smaller, hi-speed ferry. It’s a shorter ride but also much bumpier.

I thought Tahiti was beautiful when I arrived but now that I have been to Moorea, it seems almost like a letdown to go back.

On my first two nights, I didn’t have anything better to compare it to. Now I do.

So, I guess I’m now one of those obnoxious people who says “Oooh, don’t go to Tahiti, it’s so over-rated, head immediately for the outer islands.”

Sadly, it’s true. Of course, I am certain the island of Tahiti has much more to offer than what I saw since I barely had time to leave my hotel. For that reason, I’m more than willing to give it a second chance.

Of course, any future French Polynesia trip will definitely include another visit to Moorea!

If you do visit Tahiti, try to book a package deal with meals included. It will save you from the menu sticker-shock and make your trip much more enjoyable (especially if you’re cheap like me!).

I wish I had time for a trip over to Bora Bora on this trip but it takes an inter-island flight to get there. And there just isn’t enough time (or enough money) to do it all.

Next time, I will definitely make time for it. And if I win the lottery between now and then, I might even be able to eat while I’m there. (Update: I did make it the next year but it didn’t go quite as planned.)

Next up, one last stop in Belize before Round-the-World #4 comes to a close!

For more on Moorea and Tahiti, start here:

Forget Bora Bora: 3 Reasons Moorea is the Best of Tahiti