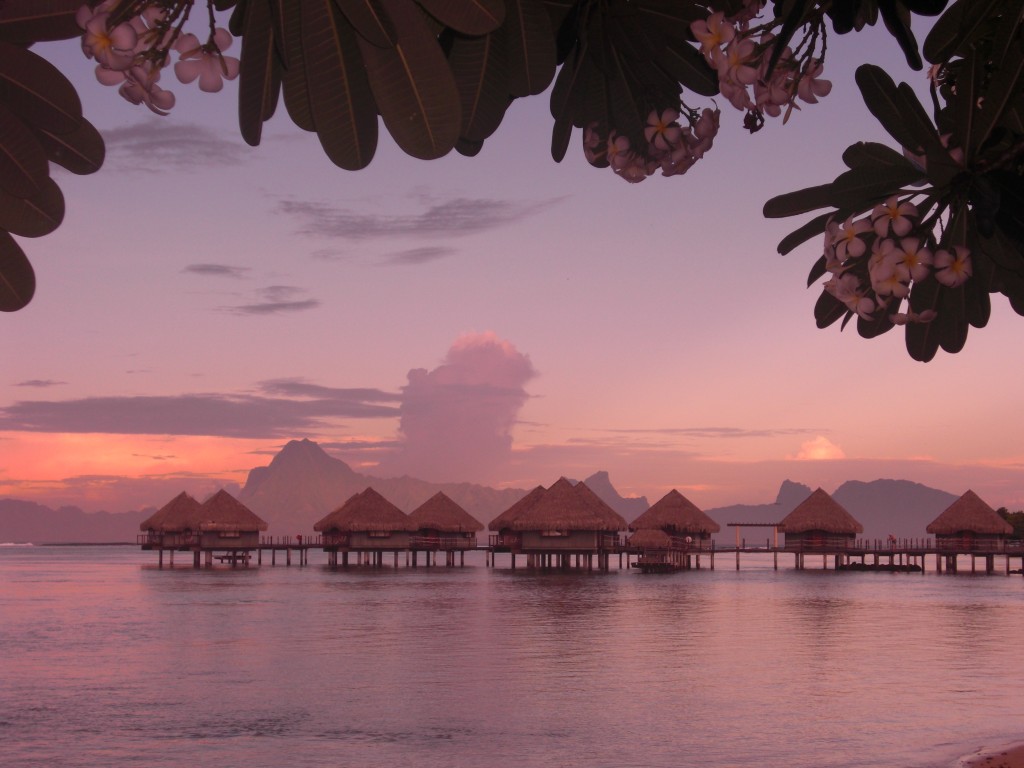 My Air Tahiti Nui flight from Auckland to Papeete, Tahiti was 5 hours long but after all the marathon flights I’ve been on lately; it seemed to go by in a flash. The most interesting part was that I left Auckland at 3pm on February 2nd and landed in Tahiti at 9:00pm on February 1st (thanks to a crossing of the International Date Line).

It’s a little weird that I had to pay for a hotel for the night of Feb 1st…TWICE!!

We landed at Faa’a International Airport on the island of Tahiti at 9pm local time so, unfortunately, it was dark and I couldn’t see anything exciting on approach.

We were greeted on the tarmac by ukulele music and a pair of Tahitian ladies handing out “tiare” flowers (the island gardenia) to be worn behind the ear. The tiare flowers smelled heavenly and it was kind of funny to see even the men at baggage claim with a little white flower behind their ear.

I realized on the flight that while I had sent an e-mail to my hotel in Tahiti inquiring about the cost of an airport pick-up and sending my flight information, I never actually heard back from them.

I rarely do a hotel transfer but my guide book mentioned that taxis were exceptionally expensive in Tahiti so hotel pick-up was sometimes a cheaper option. I hoped that there might actually be someone there waiting at the airport for me but when I exited baggage claim, no such luck.

I tried calling the hotel from the tiny airport’s information desk but the front desk agent I spoke to was pretty rude about it and told me I’d have to just get a cab…welcome to paradise, I thought.

It got worse when I got out to the cab stand and learned that a taxi to the hotel (approximately 6 miles away) would run me a whopping $45 US. Yikes!! Now, you may remember how worked up I got over the $12 taxi ride from the airport in Bangkok so I’ll just say that I wasn’t in the most pleasant mood when I finally pulled up in front of the Le Meridien Tahiti Resort (2020 Update: This is now the Sofitel Tahiti Ia Ora Beach Resort.)

As I stepped out of the taxi, I was greeted by the same hotel representative I had spoken to on the phone, Tino. His attitude had turned around completely in the past 15 minutes and he told me not to pay the taxi driver, the hotel would take care of it. I can only assume that after I called he checked my reservation, saw that I was a Platinum member with Starwood and had a change of heart. Whatever happened, I was thrilled to save the 45 bucks.

Tino checked me in to a suite and within minutes a bottle of Moet champagne was delivered to my room (nice touch). Slowly, my attitude began to turn around, too. He gave me the best news of all when I inquired about the charge for internet in the rooms (prepared for the worst) and he surprised me by saying that, currently, it was free!!

That was the best news I’d heard all week. Apparently, they were making some changes to their internet service and normally there is a substantial charge but temporarily, it was free.

My suite was nice, kind of an indoor/outdoor thing. The living room was more like a huge open-air balcony, and the bedroom was like a standard hotel room. It had all the amenities you would expect and one I didn’t – an artist’s easel and pastels – in case you want to release your inner Gauguin? (I don’t have one.)

It was a beautiful room and (from what I could tell in the dark) had a great view but I was determined to score an upgrade to one of those fabulous over-the-water bungalows on this trip. I figured I would still have three more nights to accomplish that so I decided to get some sleep and start fresh tomorrow.

Tahiti is in the same time zone as Hawaii which means it is 5 hours behind Eastern US time. So, that meant getting up for the first time around 4am to check e-mail. Luckily, there was nothing important so I went back to sleep for another hour.

When I woke up the next time, I could see the beginnings of a spectacular sunrise outside my window. Since this was my first look at the resort in the daylight, I got my camera and headed out at 5:30am to check out the beach and the rest of the property.

Though the beach isn’t much to speak of, the Meridien’s sandy-bottom pool was fabulous so I spent some quality time there in the morning before heading into Papeete to check out the market. But the island of Tahiti was really just a necessary stopover on my way to the main event and later that day it was time to catch my ferry over to Moorea.