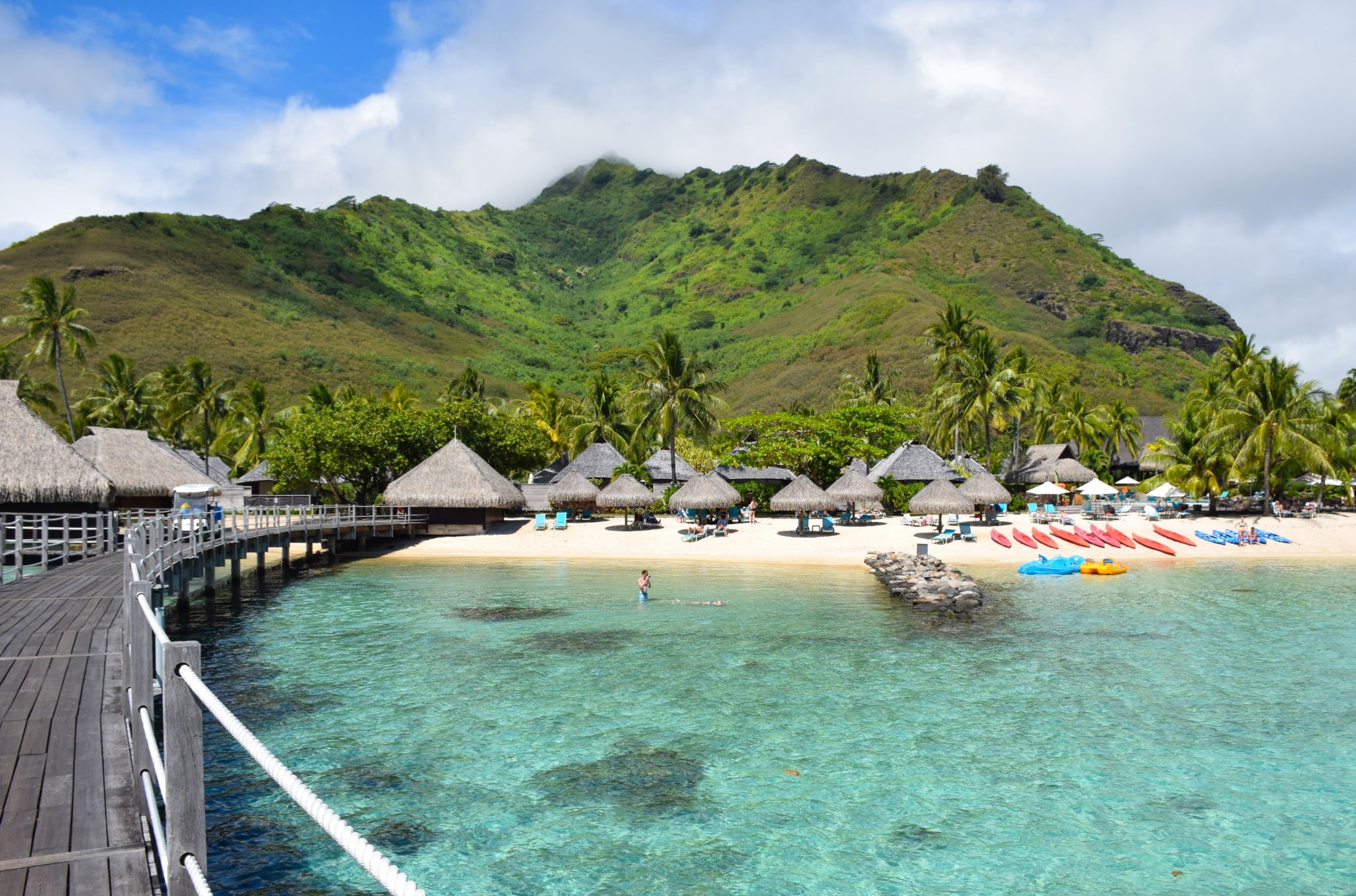 But to reach Moorea, you have to start on the main island of Tahiti, home to the largest airport in the islands. We landed in Papeete, Tahiti a little after 10:00pm after a pleasant 5-hour flight from Auckland on Air New Zealand. Since the last ferry to Moorea runs late in the afternoon, we had booked the Le Meridien Tahiti for our first night in the islands and planned to take a mid-morning ferry over the next day.

We arrived at the Le Meridien Tahiti just in time to grab a drink at the bar before it closed and after a restful night’s sleep awoke to the tropical paradise that is Tahiti. The Meridien has a gorgeous oasis-like sand-bottom pool so we walked down to it, to the beach and along the boardwalk leading to the overwater bungalows before heading up to breakfast.

After breakfast we packed up and took a taxi into downtown Papeete to check out the market. Papeete’s market is always an entertaining mix of tourists shopping for souvenirs and locals shopping for fresh seafood and produce. It’s definitely the best place in the islands to buy souvenirs so we picked up a few before heading over to the ferry terminal.

Moving on to Moorea

The ferry to Moorea takes about 40 minutes and I’m not sure there’s a more stunning ferry ride anywhere in the world. The approach to Moorea with its lush, rugged emerald peaks and sparkling turquoise lagoons is the stuff of Gauguin paintings and Michener novels. It’s completely mesmerizing and we watched in awe as the ferry docked and began to offload its passengers.

In an effort to save money (which we knew we’d be spending a lot of while on the island) we decided to forgo the taxis and take the local bus instead. I’d done it once before and remembered it being an easy and inexpensive way to reach the resort. Just hop on and tell the driver where you want to get off and he’ll stop there. Since there’s just one road ringing the small island, it didn’t take long to get to our hotel for the next 4 nights, the Hilton Moorea Lagoon Resort.

With some creative financing, we’d managed to book 4 nights (2 in an overwater bungalow and 2 in a garden pool bungalow) while only paying full price for one night. We were able to use our Hilton points for the other 3 nights and then pay a little extra to upgrade to a better room than what Hilton points will buy you (which is just the basic, no-pool bungalow).

We definitely wanted to spend a few nights in an overwater bungalow since it’s such a big part of the Tahiti experience but we didn’t want to pay the extravagant rates for all 4 nights, so we compromised with the last 2 nights in a more affordable garden bungalow. Luckily, even the affordable bungalows come with their own private pool!

Our overwater bungalow turned out to be just spectacular and we spent the first few hours simply gazing around in awe at the views. Eventually, we snapped out of our daze and donned swimsuits and snorkeling gear to climb down our ladder straight into the lagoon for a bit of snorkeling. The Hilton’s lagoon is a vast, waist-deep pool of clear, aquamarine water filled with colorful coral and inquisitive tropical fish. You could spend days in this lagoon and never get bored…and that’s exactly what we were looking forward to doing.

Sharks in the lagoon

That night we decided to try the Crepe Bar for dinner (a far less expensive option to the main restaurant) and as we walked down the boardwalk to the bar’s location over the water we noticed other guests staring down into the water. Curious, we joined them and discovered they were watching about a half dozen black-tip sharks swimming around under the restaurant. In the same lagoon where we just spent the afternoon snorkeling. Interesting. I’d never seen the sharks in my previous visits and they came as a bit of a shock but apparently it’s a daily thing for them to be drawn to the lights around the overwater restaurants at night. So, no night swimming…noted!

I’m not sure how I missed the sharks before but we were both a little more hesitant getting into the lagoon the next day; though we persevered nonetheless! In my head, I rationalized that one of the top things to do in Tahiti is to swim with sharks and rays but I guess I’d prefer for that activity to take place in a more controlled environment and not outside of my bungalow.

We passed the next few days sleeping late, hitting the spa, snorkeling, kayaking and stand-up paddle-boarding and even survived the downgrade in rooms to our garden bungalow (the private pool wasn’t bad!). At night we watched sunsets and fire dancers and alternated between room service dinners and the Crepe Bar.

It was a blissful 4 days and it passed all too quickly. Before we knew it, it was time to take the ferry back over to Tahiti for our final night. With an early flight out the next day, we had no choice but to spend our last night on Tahiti so we could make it to the airport in time.

Luckily, the Le Meridien Tahiti is a nice way to ease yourself back into reality and we were surprised with a terrific upgrade to an enormous suite with a sprawling terrace. We spent the rest of the afternoon enjoying the pool, then watched a spectacular sunset and splurged on a romantic final night room service dinner on our terrace. The next morning, it was time to head to the airport for the long flight back to the US.

I can’t believe this incredible honeymoon has finally come to an end. (Though my husband assures me our honeymoon will never be over…yes, he’s adorable.) It seems like just yesterday we were saying “I do” in Tuscany, watching sunsets in Santorini, gazing in wonder at the Taj Mahal in India and crawling through tunnels along Korea’s DMZ.

And there was so, so much more in between. What an adventure this has been!

I feel a bit like I’ve run the Amazing Race three times this summer…though I got a lot more out of it than a million dollar prize. I got the world’s most amazing husband and an exciting start to a lifetime of journeys together.

Here’s hoping our next adventure is just around the corner!

21
We use cookies to ensure that we give you the best experience on our website. If you continue to use this site we will assume that you are happy with it.OkPrivacy policy