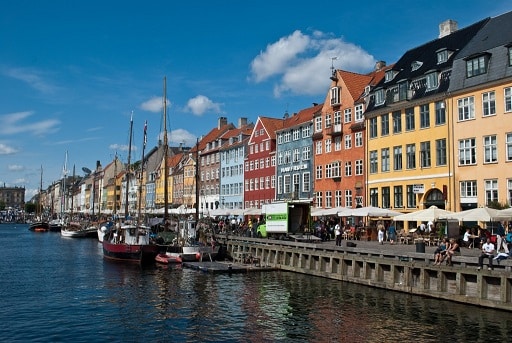 We took off from Keflavik in Iceland just after 1am and 3 hours later touched down in Copenhagen. I can’t believe the trip is coming to a close, seems like just yesterday I was cursing our delay to Munich at Hartsfield.

But alas, all good things must come to an end, so here I am in Copenhagen with two days left to enjoy my European holiday before returning to the real world.

According to a global survey, Denmark is considered the happiest nation on earth. What a perfect place to wrap up my European tour.

What is Copenhagen known for?

Copenhagen is Scandinavia’s largest, most cosmopolitan capital and also home to the oldest monarchy in the world. The Danish economy is very green-focused and 20% of the country’s electricity is provided by the wind turbines that dot the landscape.

With the time change, it was just before 7am by the time I made it to my hotel, the Cabinn City Hotel. Like the Thon hotels chain in Norway, Cabinn operates several budget hotels in Copenhagen and from what I’d heard the “City” property was the best. Cabinn’s motto is “Sleep Cheap in Luxury” and that was exactly what I was looking for.

Seems I’m getting quite a tour of budget hotels in Scandinavia. The combination of limited Marriott and Hilton properties and exorbitant rates of anything of their caliber has forced me into an accommodations arena that is somewhat foreign to me.

But I must say, I‘m getting a pretty good education on the subject. And I’m discovering that most of them are not bad at all, certainly adequate for a night here and there. Though I wouldn’t want to spend a month in one.

I arrived at the Cabinn City Hotel at a ridiculously early hour for check-in and I was certain that they wouldn’t have a room ready for me. But I was pleasantly surprised when the front desk agent checked me in immediately. Score! This was a huge relief since I’d been on a plane all night and I was beat. I was sorely in need of a power nap before hitting the streets of Copenhagen.

When I got to my room, it was pretty much the same as the last two budget hotels I’d stayed in. Bunk beds, small desk, smaller bathroom, clean and comfortable, nothing fancy…but with free WiFi and a private bath. All I really need.

I crashed for a few hours (the bed was surprisingly comfortable) and rejoined the living around noon. After a stop by the front desk for a map and some advice, I finally headed out to see some of Copenhagen.

I took a walk along the water on my way to Copenhagen’s #1 sight, the Nyhavn waterfront. When you picture this city in your mind, Nyhavn is what you see.

It was just as beautiful as advertised and on a sunny summer afternoon, it was the place to be. Lined with colorful buildings, restaurants and cafes; the canal filled with tour boats, ships and yachts and people sitting along the edge of the water sipping a Carlsberg and enjoying the day.

It seemed like the weekend, but it was a Tuesday afternoon. Nyhavn was definitely the heart of Copenhagen and I made it my home-base for the next two days.

That afternoon I explored a little further out with a walk to Amalienborg Palace, home of the royal family since 1794, and the nearby Marble Church. The observation deck at the top of the church is supposed to be the best view of the city according to my guide book – what the guidebook failed to mention, however, was that it is only open for a brief period twice a day. I thought that was pretty important information but apparently Lonely Planet did not.

The guidebook also barely gave a mention to the fabulous Nyhavn area which was my favorite part of the city, by far. This is not the first time I’ve been disappointed in the quality of a guide book and thought, “I could do this better.” Maybe someday, I’ll give it a shot.

Anyway, after my disappointing trip to the Marble Church (I would have to return tomorrow to make the climb to the top) I headed back to Nyhavn for dinner. I wanted to try a Danish specialty called “smorrebord”, which is basically an open-faced sandwich topped with any number of things. Though there were a number of “pickled” fish options, I went with the safe bet of a tomato-pesto combination. It was delicious.

The next day I got an early start with a walk over to the 17th-century Rosenborg Castle and surrounding Kongens Have (King’s Gardens). After that, I headed back to Nyhavn for my real plan for the day, a canal tour boat.

Relatively cheap in Scandinavian terms at $15, everyone said the canal tours were a great way to see the city. It was another gorgeous sunny day and a boat tour sounded like the perfect thing to do. The hour-long tour was a lot of fun and enabled me to see many parts of the city I probably wouldn’t have made it to otherwise.

After the canal tour, it was time for lunch back at Nyhavn. I had a delicious lunch of mussels and a glass of wine and then headed back to the Marble Church to make the 1pm climb to the top.

When I got there, it became immediately obvious why they schedule the trips to the top. The winding staircase that leads to the observation deck is so narrow there is barely room for one-way traffic, much less two. But after the long (and somewhat claustrophobic) climb to the top, the view over the city was indeed outstanding.

Later I took a stroll over to Hojbro Plads, a large square in the center of the city currently featuring an exhibition on advances in green technology. Each exhibit was in a “bubble” display and it was interesting to walk around reading them all. From there, I walked down the main shopping street, Osterade, for a little window shopping.

Then it was, sadly, time to head back to my hotel, get some work done and start packing for the last time.

First, I would like to take this opportunity to thank my friends Dena and Shannon for travelling along with me on this trip and reminding me that travel with good friends is just as much fun as travel on my own. Thanks to Dena for dancing til dawn with me in Greece and putting up with my obsessive need to walk everywhere we go.

And thanks to Shannon for being the first person I’ve ever traveled with to come prepared with a list of things to see and do in each country…hooray! Finally, someone to play tour guide for me.

This trip was a lot different than the Around the World trips I’ve done; in part because I actually had friends traveling with me for much of the trip (a bonus!) and in part because many of the destinations were similar (though they were certainly all fabulous, not a dud in the bunch).

It was also a bit strange to be gone for a month and stay (mostly) on the same time zone. Once you adjust, it’s a lot easier than the jet-lag filled RTW excursions where I change time zones every other day.

In all, 14 countries in 30 days (11 of them new to me) bringing my current country count up to 56 – and counting. Still aspiring to become a full-fledged member of the “Travelers’ Century Club” with 100 countries marked off my list someday.

As for this trip, Greece was amazing, as it always is, but my new favorites are Krakow, Tallinn and especially Iceland. I hope to return to each of them someday soon. From the discos of Mykonos to the gas chambers of Auschwitz, it’s been quite a month. I’ve seen a lot and learned a lot.

In no particular order, here are a few things I’ve learned on this trip:

– You don’t get a passport stamp between European countries – I got all of two, coming into Munich and leaving Denmark

– Guidebooks can be helpful, but sometimes it’s best to ask a local for advice and then blaze your own trail

– Budget hotels (NOT hostels) can be an acceptable accommodation for short stays, this one was a real eye-opener for me

– Scandinavia is beautiful but ridiculously (and prohibitively) expensive

– Did I mention my intense dislike of cobblestone streets?

For those who have asked, yes, I am in the planning stages for Round the World #5 again in January. So, if by chance you haven’t heard enough about my travels by now…in another 6 months I’ll be writing again. Haven’t decided on all of the destinations yet but that will be top priority in the next few weeks as (thanks to this trip) I now have enough miles to book the ticket.

So for now, it’s back to work I go. Another arduous season on the road with ESPN College Football awaits and I’ve got a lot of catching up to do before I leave for my first game at Cal-Berkeley next Wednesday (as if re-adjusting to East Coast time after a month in Europe won’t be fun enough, I get to go straight to the West Coast!).

In the meantime, I’m looking forward to a weekend at home visiting with my friends and family and reacquainting myself with my house and the cat…if she’ll let me in.

Over the years, I’ve discovered that there are those who don’t have a great desire to travel: the cost, the hassles, perhaps fear of the unknown..it’s just not worth the trouble to everyone. I can understand that.

Some of those people have said to me, “I’ll never go to most of the places you write about, but I get to see so many parts of the world through your eyes.” If that’s so, I’m happy to oblige. It’s a big beautiful world out there and I only hope I’m doing it justice.