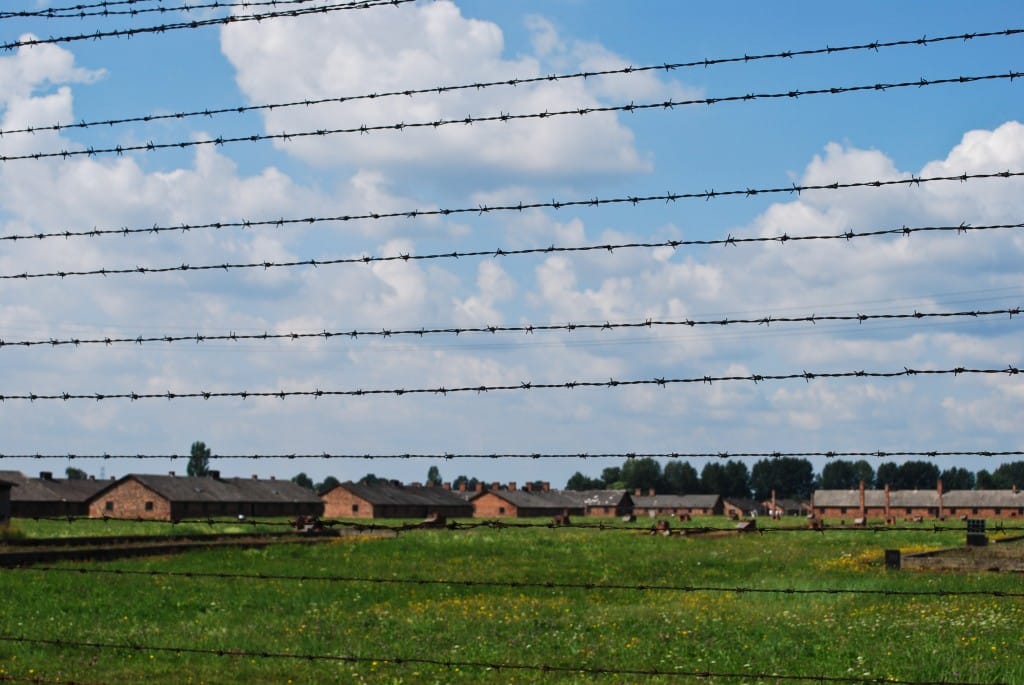 We’ve reached the mid-way point on this 30-day trip around Europe and Scandinavia and today, it’s time to visit one of the world’s most reverential historic sites.

The only way to visit Auschwitz-Birkenau is by guided tour and we’d booked our tour from Krakow the previous day.

We woke up early, grabbed a quick breakfast, and headed down to the lobby to meet our tour bus. Now, I’m not sure I’ve addressed this subject before on these pages but, in general, I avoid group tours. I think it’s just my independent streak – I mean, it certainly can’t be that I’m antisocial, right?

In previous travels, I’ve gone to great lengths to avoid taking a group tour or even being in the vicinity of one. In China, I hired a car to go to the Great Wall at 7am knowing that tour groups didn’t get there until 9am – I had it all to myself for an hour.

In Egypt, I hired an Egyptologist to take me around the pyramids, again avoiding the mass of tour groups and getting some quality alone time with another ancient wonder of the world.

It’s not that there’s anything wrong with group tours, I know many people enjoy traveling that way and learning the history in each place from a knowledgeable guide – I do see the benefits.

I just much prefer to get a book on the place or an audio tour and see it at my own pace. It allows you to focus on the parts that most interest you and skim over the parts that might not.

But since a group tour is the only way to visit, we made the best of it.

It was an easy 60-minute ride on the bus to the town of Oswiecim and its former military base re-named Auschwitz during the German occupation.

Words do no justice to the horrors of Auschwitz.

After several hours touring the grounds of both camps, I was stunned into reverential silence. It is a place that everyone should have to see once in their lifetime. It’s the only way to really appreciate the magnitude of the cruel brutality perpetrated on the millions who died here and the few who survived.

There are simply no words.

Yet, I will do my best to tell the story as I experienced it today.

The history of Auschwitz

Though our tour started with Birkenau, I will begin at the beginning…with Auschwitz.

Auschwitz I was the original camp and it served as the administrative center for the whole complex. A former Polish military base, the SS converted it into a concentration camp in 1940.

It was originally used for interning Polish intellectuals, members of the resistance movement and Soviet Prisoners of War but eventually became the final destination for hundreds of thousands of Jews.

As you pass through the main gate, it bears the immortal inscription, “Arbeit Macht Frei” (“Work Makes You Free”).

An outrageously cynical inscription considering no one was ever set free from this camp. The only liberation from Auschwitz came in the gas chambers.

In 1942, at the Wansee conference, Hitler rubber-stamped the wholesale extermination of the Jews and things immediately ramped up at Auschwitz. The increased need for space in the concentration camps led to the rapid construction of Auschwitz II – Birkenau, the largest and most savage of all the Nazi death factories.

The horrors of Birkenau

At more than 400 acres, Birkenau was created solely to expedite mass executions.

The barracks were hastily thrown together and only used by those few deemed fit for labor. All others, including all women and children, were sent to the gas chambers immediately upon arrival.

As we stood in the gas chamber, our guide explained why the people went willingly, for the most part, to the camps.

They were promised work and a new start for their families at the labor camps right up until the minute they walked into the gas chamber. They endured long train rides in packed cars from all parts of Europe to Birkenau.

When they arrived, they were separated from their luggage and told that it would be waiting for them in their new barracks. After disinfectant showers (welcome news after the long and uncomfortable train ride) they would each be assigned jobs based on their abilities.

They were sent into a chamber to undress and then into another for their shower. The gas chambers were even staged with what appeared to be shower heads. But as soon as the doors were closed, the cans of Zyklon B gas were dropped in through a hole in the ceiling.

The gas chambers and crematoriums of Auschwitz and Birkenau could accommodate thousands per day and operated at full capacity from 1942 up until its liberation in January, 1945.

The barracks of Auschwitz contain many disturbing exhibits of items recovered when the camp was liberated in 1945.

There are entire rooms full of clothing, shoes and luggage, marked clearly with name and town, so it could be recovered by its owner after a shower. Even pots and pans, which clearly indicated that the people arriving here were certain they were starting a new life – why else carry pots and pans?

There was also a display with several tons of human hair bound for a German textile factory at the time the camp was liberated. (Prisoner’s heads were shaved when they were removed from the gas chambers.)

As startling as the displays were at Auschwitz, I was especially moved by the pure scale of Birkenau. By comparison, Auschwitz (a former military barracks) looks reminiscent of a university campus while Birkenau – just 3km away – is a vast, desolate field with only rudimentary living quarters.

When you picture a concentration camp in your mind, it is likely Birkenau that you see.

The solitary train tracks still run through the center of the camp, ending at the doorstep of the gas chamber. Those deemed fit for work endured a miserable existence in harsh living conditions and forced labor. Most survived only a few months, at best.

As you walk the massive grounds and along the train tracks, it is impossible not to envision the people who arrived here…who they were, where they came from.

The emotional impact of visiting a place like Auschwitz Birkenau is indescribable. You can read the history and know the terrifying story. But standing on that hallowed ground and walking in the footsteps of those who perished there transcends anything that can be gleaned from a book or a movie.

I will forever see those train tracks in my mind.

It is an experience I will carry with me for the rest of my life.

And while it won’t make many lists of favorite travel destinations, it’s a place everyone in the world should have to see. Which is why I included it on my list of 30 most extraordinary travel experiences.