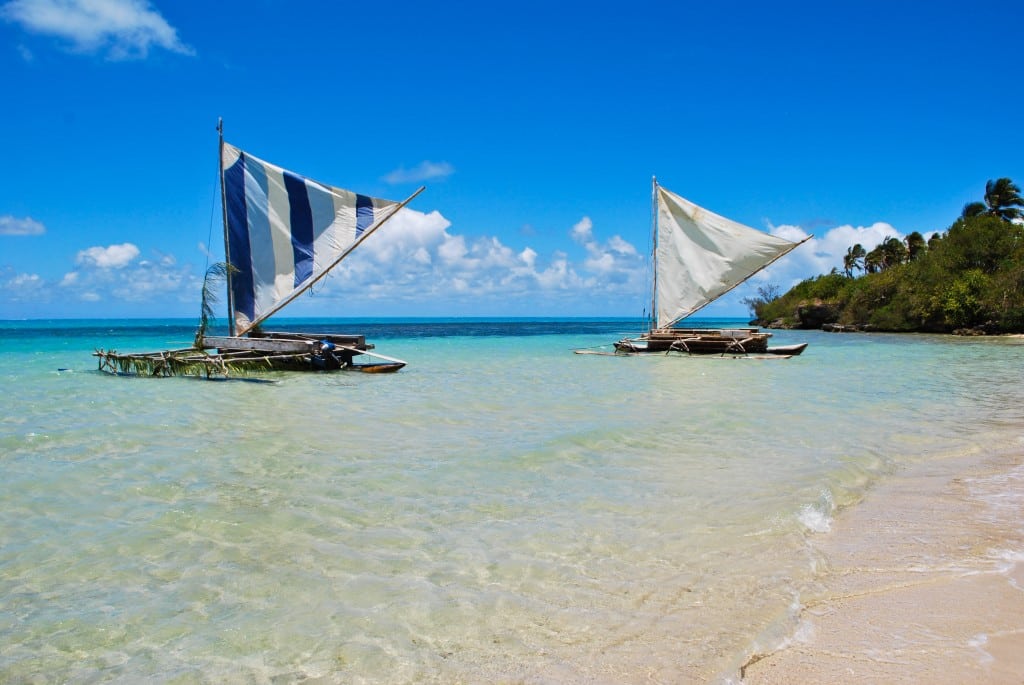 We’re nearing the end of Round-the-World #6, up next…New Caledonia!

I have only been to four of these so far, but they are four of the most gorgeous islands I’ve ever seen anywhere in the world.

Though most of these islands no longer fall under the French flag, the country’s cultural legacy often remains. When I first took up French in high school, I never thought it would be so useful in real life.

When I began traveling overseas, I was excited to brush up on my language skills for trips to France. But I always thought that would be the only place I would use my remedial French language skills. Not so!

You’d be amazed how often I’ve been able to use French in my travels.  Morocco, Vietnam, Cambodia, and, of course, some of the most beautiful islands the world has to offer. Not to mention 90% of Northern Africa.

Yes, the French have been busy over the years.

Where on earth is New Caledonia?

Located about 750 miles east of Australia, New Caledonia sits in the middle of the South Pacific between Australia and Fiji.

The territory consists of the main island (or Mainland), the Isle of Pines to the southeast, and the four Loyalty Islands (Mare, Lifou, Tiga, and Ouvea) to the east; as well as a number of other smaller islands.

New Caledonia is home to the world’s second-largest reef (second only by a hair to Australia’s Great Barrier Reef) and the world’s largest lagoon – a UNESCO World Heritage Site. It is the third-largest archipelago in the Pacific after Papua New Guinea and New Zealand.

The Mainland is home to a spectacular central mountain range running the length of the island and the capital city of Noumea, where I’ll be staying.

Originally settled by Melanesian tribes, the French took possession of the islands in 1853, under the reign of Napoleon.

WWII marked a turning point in New Caledonian history. Its strategic location in the middle of the Pacific conflict opened it up to the rest of the world.

In 1942, the Americans arrived taking over much of the unoccupied land for their military installations. During the occupation, the American GI’s built roads, troop housing and hospitals, drained marshes, laid water and electrical lines and made numerous infrastructure improvements that remain to this day.

Over the course of 4 years, more than a million American troops transited through New Caledonia. The older locals have fond memories of the American GI’s and there is a lovely American memorial in downtown Noumea that honors the contributions of the Americans.

Though still a French territory, since the signing of the 1998 Noumea Accords, New Caledonia has enjoyed more autonomy within the French Republic. Noumea itself is a cosmopolitan city with all the modern conveniences.

Where to Stay in Noumea

After an easy flight from New Zealand, I landed in Noumea to sunny skies.

My hotel for this stop is the gorgeous Le Meridien Noumea, situated a few miles south of the capital on beautiful Anse Vata beach.

Luckily for me, the town of Anse Vata – with all of its shops and restaurants – was a 10-minute stroll down the beach so I had easy access to everything Noumea had to offer.

Like Tahiti, New Caledonia is definitely not a budget destination.

The currency is the French Pacific Franc which is pegged to the euro and currently no bargain for US dollars. The airport is located more than 40 miles from Noumea and the transportation options are limited and expensive.

I opted for the airport shuttle which was $70 round trip and took about an hour each way.

On the plus side, when I arrived at the hotel, I scored another suite upgrade. It had a spectacular balcony with a panoramic view of the sea.

My magnificent balcony had a terrific view of the area’s #1 sporting activity – kite surfing.

The kite surfers were at it from mid-morning until the sun set each day, sometimes dozens of them at a time, crisscrossing the bay doing tricks and flips. It was very entertaining to watch!

After settling into my room and unpacking a little (a luxury with three full nights in one place for the first time all trip), I headed down to the concierge desk to look into my options for the next day.

My goal was to secure a day trip to the southern island of Ile des Pins (Isle of Pines). I’d seen indescribably beautiful pictures of the island that justified the splurge of $120 round-trip for a ferry ticket.

My plan was to take the ferry out in the morning, rent a bike to ride around the island for the day, and then return on the evening ferry.

The concierge was very helpful in booking everything for me so I spent the rest of the afternoon poolside before walking into Anse Vata for dinner.

The next morning I was up bright and early to catch the ferry. The boat departed Noumea harbor at 6:45am and docked in Ile des Pins just over two hours later.

I could tell right away that the glowing reviews I’d read of the tiny island still didn’t do it proper justice. It was quite literally like a Garden of Eden in the middle of the South Pacific.

The water was so clear in some places it was colorless against the pure white sand of the beaches. The two most remarkable beaches were Kuto Bay and Kanumera Bay which were only about 200ft across a narrow road from each other.

The island’s inhabitants are known as “Kunies” and they have kept their tribal traditions alive in their small villages scattered around the island. The Kunies are very friendly to tourists and every time I passed one I was greeted with a cheerful, “Bonjour!”

In a moment of frugality, I elected to forgo the bike rental when I found out the price was a good deal higher than I expected. The main village I wanted to visit was Vao and the sign said it was only three kilometers away.

I started walking toward Vao with a loose plan to return to the ferry dock early enough to spend the afternoon at the two beautiful beaches I’d seen as I stepped off the ferry.

The Kunies & their sailing pirogues

One of the most fascinating things to see on Ile des Pins are the “pirogues.”

The tradition of sailing these ancient crafts from St Joseph’s Bay has been kept alive for centuries by the Kunies.

They are really fascinating to see and I was lucky enough to stumble across them in Saint Maurice while looking for the seaside totem poles, even though I never made it to St Joseph.

The solemn circle of totem poles are said to be guarding the nearby statue of Christ.

As I followed the path toward the shore to see the statue, I was passed by what had to be the entire population of the island (about 50 people) engaged in some kind of walking church service. They were led by a man who was giving a sermon into a handheld loudspeaker and walking in sync while chanting verses.

They were walking from the statue of Christ to the island’s only church in the village of Vao. It was quite a sight to see after not seeing another soul for my first hour or so on what was starting to seem like a deserted island.

One of the first things I learned about Ile des Pins was that just because an area on the map has a name, doesn’t make it a town. Vao appeared to be the main town on the island so I assumed there would be a few lunch options on the area.

I was wrong. The only buildings in the small village were modest homes, huts, the church, and a single-room (each) post office, hospital and town hall.

I finally came across a small market and was at least able to buy a Diet Coke and a bottle of water but their food options were limited to grocery staples that would require kitchen facilities.

I was beginning to think I was going to have to settle for the granola bar in my backpack.

Luckily, once I made it back to the beach, there was a little beachside grill (and by “grill” I mean just a guy…with a grill) selling delicious chicken skewers for only about $3.

I bought one and enjoyed it on the beach with a lagoon view better than any I’ve ever seen.

After spending the rest of my afternoon lounging under a palm tree on the beach and swimming in the lagoon the temperature of bathwater, it was finally time to head back to the ferry.

It was painful to leave this paradise behind after only one day. I kicked myself for not booking a few days at the other Le Meridien property on the island, Le Meridien Ile des Pins.

I spent my final day on the island shopping in Anse Vata and enjoying the hotel’s pool and beach while watching the kite surfers play in the bay.

Someday I’ll return to visit the Loyalty Islands. Rumor has it they are just as amazing as Ile des Pins.

Next up on the Round-the-World #6 itinerary…a long-anticipated return to Tahiti.

71
We use cookies to ensure that we give you the best experience on our website. If you continue to use this site we will assume that you are happy with it.OkPrivacy policy