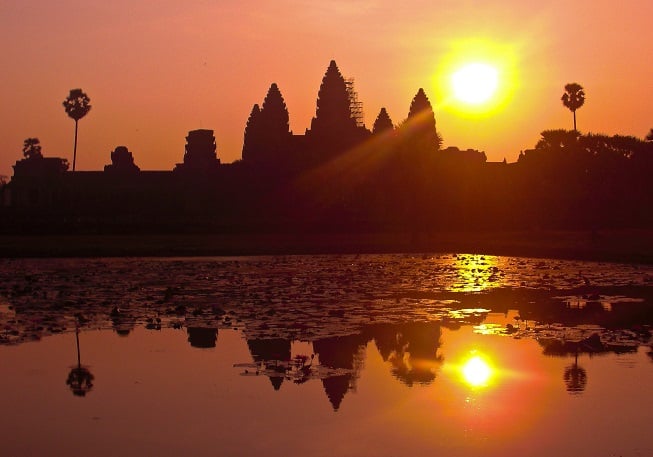 It is just before 5:00am and I am sitting in total darkness. I’m in the carriage of an auto-rickshaw (tuk-tuk) bouncing along a jungle road toward the ancient temple of Angkor Wat.

The lone headlight on our vehicle is the only light to be seen for miles. But even that is barely enough to light the road directly in front of us. The air is thick with humidity, even at this ungodly early hour.

We drive through the darkness into what appears to be the middle of a jungle. I think idly to myself that I have just put a lot of blind faith in my tuk-tuk driver, Mr. Nak, whom I met only 5 minutes earlier in front of my hotel.

Truth be told, he could be taking me anywhere.

He asks if I have bought a ticket for the temples yet and I say no. That answer necessitates a brief stop along the “road to nowhere” at a brightly lit ticket booth. There, I am quickly photographed, relieved of $40 US and handed my 3-day pass (complete with photo) that will grant access to all the wondrous temples of Siem Reap, including my destination this morning.

In minutes, we are back on the road and my eyes again adjust to the darkness.

We are passed by the occasional motorbike or, even rarer, full-size vehicle. But mostly we travel alone down this narrow road carved into the Cambodian jungle. A road that didn’t exist only a few years ago.

Ten minutes later, Mr. Nak stops the tuk-tuk and tells me we have arrived.

There are a few other vehicles about and I can hear people talking. But I can see nothing. I have to ask him in which direction I should walk. He points me to the right where I spot a few bouncing beams of light coming from smarter tourists who thought to bring flashlights.

At this point, I decide to employ a tactic that served me well in Israel last year on my pre-dawn hike up Masada. I pick a bouncing light and follow it.

I retrieve my phone from my backpack. The bluish glow helps to light the area immediately in front of my feet as I follow the small beam of light from a couple a few steps ahead of me. The phone’s light is not sufficient for directional guidance but it is enough to keep me from falling into the moat that I know, from pictures, surrounds Angkor Wat.

We walk down a stone path for what seems like forever. I have no idea what our ultimate destination is. I can only hope that someone in front of me knows what they are doing.

After passing through one temple structure, the couple with the flashlight – who I am closely following but trying not to be too obvious about it – veer off down a set of stone steps to the left that appear out of nowhere. There are other tourists milling about in the dark at this juncture. Some continue straight and others take the staircase to the right.

I have no idea which direction is best to stake out a prime spot for the sunrise view. I decide to stick with my gut and follow my original leaders.

We walk for a while through some grass (I hope) and eventually come to a spot where there are a number of other bouncing lights and voices in the dark. My phone’s dim light illuminates a stone wall next to a body of water. Others are already seated there and since I can’t see anywhere else to go, I grab a spot on the wall and settle in for the show.

For the next 30 minutes, we all sit quietly in the dark. Only the sounds of tripods extending and telephoto lenses being tested disturb the peace. I look up for the first time and realize that the sky is literally blanketed with bright stars. It’s mesmerizing.

Too bad they weren’t more effective for navigation. A full moon would have been nice.

There are noises coming from the body of water at my feet. I hope they are just fish jumping, but who can tell? It’s amazing what you have time to notice when you are sitting in the dark.

Slowly but surely, the night sky lightens just enough that I can make out the outline of the enormous towers of Angkor Wat.

Over the next 30 minutes, the sky develops into an increasingly vibrant swirl of pinks and oranges as the sheer Khmer genius of Angkor Wat is revealed to the patient crowd assembled.

It is a sunrise of epic proportions over a temple that has mastered the art of making an entrance.

Another Bucket List experience checked off the list and easily one of my top 30 most extraordinary travel experiences around the world.

It will come as no surprise that I spend all 3 of my mornings in Cambodia repeating the same ritual of watching the sunrise at Angkor Wat. It’s just too incredible to resist.

By day 2, I am a pro. Mr. Nak picks me up like clockwork at 5am each day and I come to enjoy the dark silence of the ride through the jungle. I have “borrowed” the emergency flashlight from my hotel room along with a hand towel (the rocks are a bit dirty it turns out). And when he drops me at the gate I stride confidently down the stone pathway with other tourists in tow.

By sheer luck, the spot I found on the first day turns out to be exactly the view I would pick if I had my choice of any seat in the house. I return back to it again and again and Angkor delivers each dawn without fail.

Once the sunrise is complete, I spend a little time each day exploring the vast grounds of the temple while the crowds are light. It seems the standard tour group itinerary calls for breakfast back at the hotel after sunrise, saving the temple trekking for later in the day.

Since 80% of the people at sunrise each day belong to tour groups (mostly Japanese, as usual), this leaves Angkor virtually empty for exploration in the early morning hours. And I take full advantage.

Why is Angkor Wat famous?

Angkor is the earthly representation of Mt Meru, the Mt Olympus of the Hindu faith and home to ancient gods. The walled city of Angkor Wat is widely believed to be the largest religious structure in the world.

Most of Angkor’s great temples were abandoned to the jungle for many centuries until a massive restoration took place in the 1960’s.

But it was not until the years of brutal Khmer Rouge rule and civil war ended in the 80’s that Angkor Wat emerged as a viable tourist destination. It was named a UNESCO World Heritage Site in 1992 and was removed from UNESCO’s endangered list in 2003.

The temples of Angkor are the capital of Cambodia’s ancient Khmer empire. As staggering as Angkor Wat is, I’m surprised to discover the sheer volume of temples and diversity of design from era to era that dot the extended Angkor area.

You can quite literally spend weeks exploring them all. But with only three days, I have to economize on the sightseeing. In addition to Angkor Wat, I chose to visit Angkor Thom and Ta Prohm.

The great city of Angkor Thom centers on the enigmatic Bayon, the strangest structure in Angkor and what turns out to be my favorite.

Made up of 216 giant faces carved to watch over the Khmer people from high above, you have to wonder what Jayavarman VII was thinking when he commissioned the bizarre images.

The temple has been restored to remarkably good condition and is simply fascinating to wander through. If you think the pictures look like something out of a movie, you’re right. Scenes from Lara Croft: Tomb Raider were filmed at Bayon.

Ta Prohm is the original jungle temple of Angkor.

It remains today much as it was originally discovered, a testament to the force of nature and the will of the jungle.  Like something out of an Indiana Jones movie, the crumbling towers of Ta Prohm have been left to be swallowed by the jungle.

Many of the remaining temple walls are encased in the vast root structures of the trees surrounding it.

The Cambodian Land Mine Museum

My temple visits complete by day two, I decide to visit the Cambodian Land Mine Museum for an educational history of the curse of land mines in Cambodia.

The museum was established by a former Khmer Rouge explosives expert who set thousands of mines as a child soldier.

Now, he devotes his life to personally disarming land mines throughout the country. And he cares for children who have been victims of land mines with the proceeds from the museum. It’s an eye-opening visit and provides much insight into the dangers still faced by Cambodians to this day.

On my last day, I spend a few hours at Siem Reap’s central market to pick some souvenirs.

Though the official currency in Cambodia is the riel, the second currency is (surprisingly) the US dollar. Everything is priced in US dollars which makes me feel like it’s all more expensive than it should be.

Siem Reap is quite expensive compared to Thailand and Malaysia. Though my beautiful room at the Le Meridien Angkor is just $30/night thanks to use of a few rewards points, everything else is quite a bit more expensive.

Initially, the $40 3-day ticket price seemed pretty steep. But I guess it’s expensive to maintain the extensive temple grounds with the massive influx of visitors. My “visa on arrival” was $20 and the airport departure fee was $25. So I’d spent almost $100 before I even had a meal or got in a tuk-tuk.

That amount lasted me a week in Thailand; it barely got me out of the airport in Cambodia.

It was definitely worth it, though. The tourist money that is finally flowing into Cambodia is sorely needed for infrastructure and quality of life improvements for the war-torn country’s citizens. I guess visiting Cambodia means doing your part to improve the situation here.

It’s a small price to pay for the amazing experience you get in return.