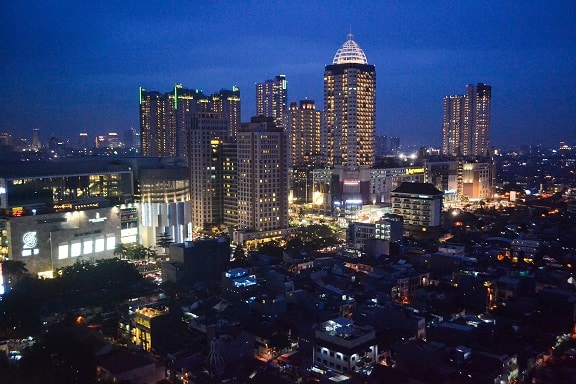 “No traffic, no Jakarta” joked my driver as we sat parked on the highway just minutes after leaving the airport.

Of course, it probably didn’t help matters that I landed in the middle of Friday morning rush hour. Luckily, it’s still only 7:30am so I’m not in any hurry.

It’s not considered much of a tourism destination, but the sprawling city of Jakarta is perhaps one of the world’s most dynamic capitals due to its sheer size alone. The city is home to more than 10 million people which certainly explains my current traffic situation.

I’m nearing the end of my 9th annual Round the World trip and Jarkarta is my last stop after two weeks of traveling around Indonesia. I arrived in Jakarta from Lombok and will have just one night to see a little of the city before jetting off to Seoul tomorrow.

Getting to the airport in Lombok in time for my 6:00am flight this morning meant a 3:30am wake-up call. But since it was the only direct flight of the day, I booked it.

And it’s a good thing I did.

I didn’t know it yet when I arrived in Jakarta but Mount Kelud, a volcano near the city of Surabaya (which sits basically right between Yogyakarta and Bali – see map) erupted last night killing 4 people and shooting ash and debris 12 miles into the air.

Twelve miles. Can you imagine?

The plume of ash spread for 360 miles across the island of Java forcing more than 100,000 people to evacuate and the closure of several airports including Surabaya, Bali, and Yogyakarta (where I was just a week ago).

Read More: How to See the Sunrise at Borobudur from Yogyakarta

The flight path from Lombok (which is right next to Bali) to Jakarta had to be directly through that mess but somehow, thankfully, my flight wasn’t canceled.

Otherwise, I’d still be sitting in Lombok right now and wondering how on earth I was going to get to Fiji (first world problems, I know).

Keraton at the Plaza Jakarta

The ride from the airport takes about an hour but finally, we pull up to the porte-cochère of the urban oasis that is the Keraton at the Plaza.

Located in the downtown business district of Thamrin and connected to the massive Plaza shopping complex, this Luxury Collection property has just 140 rooms and opened in 2013.

Keraton means “palace” in Javanese and from the minute I walked into the lobby I can see how the hotel got its name.

Though the overall feel is modern and luxurious, the influences of Javanese heritage are definitely evident. From the abstract art piece in the lobby carved from rich mahogany and depicting a royal welcome to the geometric Batik patterns adorning walls and furnishings, this hotel is certainly fit for royalty.

But for one night, they’ll have to settle for just me. I’m greeted by my butler (yes, butler) Bogik and shown to my beautiful corner room with incredible views over the city of Jakarta.

Who needs to go anywhere? I can see it all from here!

A change of plans

Honestly, I had the best of intentions to get out and see some of Jakarta during my one-night stay in the city. But once I got a good look at my room (and especially the opulent bathroom) I reconsidered.

I am tired, after all…that had to be factored in.

And I have some work to catch up on…certainly that must also be considered.

And that bed…it’s just staring at me. With its crisp, silky sheets, all cool and soft. And a pillow to occupant ratio weighing heavily in my favor.

It’s a cocoon of happiness covered by a duvet.

Jakarta will be there again another time, right? This is all the logic of a jet-lagged mind. But it sounds completely reasonable at the time.

I’m not sure exactly why but I’ve had an unusually hard time with jetlag on this particular trip.

I think the reason could be that typically I change time zones so regularly on my Round the World trips that I never have a chance to get adjusted to any one time zone. This year, however, I spent the first 3 weeks in Africa (7-8hrs ahead of ET US) and the last 3 in Southeast Asia (12-13hrs ahead).

Since I’ve really just been in two time zones (give or take an hour here and there) I’ve managed to adjust fully on each continent. Which becomes a problem when I switch to the next continent.

In Africa my sleep patterns were erratic. Since arriving in Asia, I’ve found myself wide awake at 3:00am more often than I can count.

Anyway, woe is me…I know. She’s traveling around the world for 6 weeks, cry me a river. But I keep feeling like if I could just get that one good night of sleep I’d be fine. Jakarta seemed like as good a place as any to try.

One day in Jakarta

But since collapsing into bed at 9:00am would probably just aggravate my problem, I decide to change and head to the gym for a workout and a swim.

It wakes me up a bit and I manage to get some work done that afternoon. And I even take a walk over to the Plaza shops to have a look around.

I wish I had one more day to get out and explore some of the city. But sometimes, on a trip like this, you just need a day to rest. And there’s no more beautiful room for rest and relaxation than my room at the Keraton.

I get to sleep at a reasonable hour and the bed is all that I hoped it would be. And that’s a good thing because for the next two nights I’ll be sleeping on airplanes.

So, that’s all there is to report from Jakarta, I’m afraid. Not quite the beautiful beaches of the other Indonesian places I’ve visited like Bali, Bira, or Nikoi Island.

The Beauty of Bira: Taking it Easy in Sulawesi

But if I should find myself in the city again, I will most certainly make a greater effort to do some tourist-appropriate sightseeing. (But seriously, they should stop making the hotels so gorgeous if they expect you to actually leave them.)

Now it’s time to move on to my final stop on Round-the-World #9…the South Pacific islands of Fiji!

Read More: The Song of the South Pacific: Fiji & the Mamanuca Islands