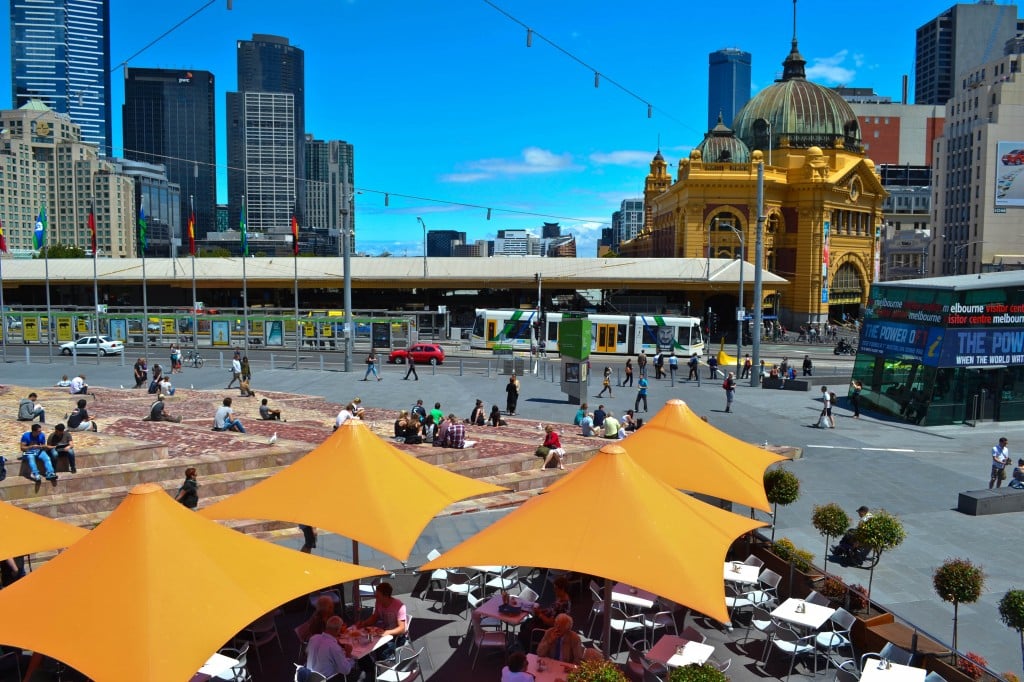 For the trip from Hong Kong to Melbourne, Australia I was back on my official Skyteam Round the World ticket for the first time since landing in Abu Dhabi two weeks ago. Which also meant I was back in business class…yippee!

My flight was on Delta partner China Southern and it was my first experience flying with them. After a quick 30-minute flight from Hong Kong, we landed in Guangzhou where I had a one hour layover before boarding my 10-hour redeye to Melbourne.

The short flight wasn’t much to speak of but the overnight flight was pretty good. And the Guangzhou airport and China Southern Lounge were both very nice. I managed a little sleep on the flight before landing in Melbourne around 9am.

As I was greeted with a g’day and a smile by the immigration officer and handed over my passport, I was reminded just how much I love the Aussie accent. In fact, it’s one of my three favorite accents in the world (the other two being New Zealand and hands-down favorite South Africa).

Honestly, you people in those countries, I could listen to you talk all day…I don’t even care what you’re saying.

In no time at all I was out of the airport and found the airport express bus which takes you to the main train station – Southern Cross – and from there you transfer to a smaller bus that takes you directly to your hotel.

When I arrived at the train station, I went up to the window to ask which bus to take to the Hilton and the guy said to me (in an Aussie brogue that could turn Kermit the Frog into George Clooney), “No worries, love. ‘Ave a seat over there and we’ll get ya sorted.” I wasn’t exactly sure what that meant but suddenly I was very much looking forward to being, “sorted.”

Just a few minutes later I was indeed sorted and on a bus bound for the Hilton Melbourne. My Starwood streak comes to an end here in Melbourne. Yes, there is a Westin in Melbourne, but it was pretty pricey compared to the Hilton and I had some Hilton points to burn. Luckily, I still maintain some status with Hilton (just gold) which actually got me an upgrade to an executive suite and access to the lounge. Nice!

It was also nice that at 10am they had a room all ready for me. I took a quick shower, grabbed my map of the city and headed out. With just one full day to see as much of Australia’s second-largest city as possible, there was no time to waste.

A Walking Tour of Melbourne

Right next door to the Hilton was one of Melbourne’s top sites and the temple for sports-mad Melbournians: the Melbourne Cricket Ground (also known as the MCG or just the “G”). Seating almost 100,000 fans, the G was the site of the first Australian Rules football game in 1858 and the first Test cricket match between Australia and England in 1877. It’s massive and I can only imagine what the atmosphere is like around here on a match day.

From the G, I wound my way over to the Yarra River and walked along the water all the way to the Docklands area and Victoria Harbor. Along the way I passed several of Melbourne’s beautiful bridges. The most interesting of which was the Sandridge Bridge.

Originally an historic railway bridge, the Sandridge Bridge was the first steel bridge over the Yarra River connecting the city to Port Melbourne where thousands of immigrants first reached Australian shores. It was redeveloped in 2006 as a pedestrian and cycle path featuring public art.

Along the bridge are giant metal sculptures called Travellers and beneath them are glass panels containing information about each country from which immigrants came to Melbourne. It was fascinating and I spent some time walking the bridge and reading the many panels.

By then it was almost lunchtime, so I stopped for a bite to eat in Waterfront City overlooking Victoria Harbor. Next, I walked back toward the city center along Collins Street; one of Melbourne’s most fashionable. With lots of grand buildings and elegant boutiques, this is one of the city’s most beautiful streets. At night, tiny white lights glimmer like Paris’ own Champs Elysees.

From there, I cut over to the modern steel and glass wonderland that is Federation Square. This is Melbourne’s central meeting place and on a beautiful summer day like today it was overflowing with people.

The square is home to the National Gallery of Victoria and the Australian Center for the Moving Image (ACMI) and is the site for regular cultural events and sports telecasts. Today, there was a band playing on the main stage and every seat in the bars and cafes surrounding the square seemed to be filled.

I’d clearly found the heartbeat of this beautiful city. I managed to find a seat in one of the many lounge chairs scattered throughout the square and sat down to soak it all in and people-watch a bit.

Later, I wandered over to Chinatown (just in case I hadn’t had enough Asian food in the past two weeks!). Apparently, I was still in the mood for Chinese food because I ended up grabbing dinner there before heading back to the hotel completely exhausted.

It was one of those perfect days I love on my trips, just walking myself silly exploring a new city. I had really lucked-out with the weather; after four days of gloominess in Hong Kong it was nice to feel the sun on my face again.

I’ve yet to find an Australian city that I don’t like but Melbourne just might be my favorite. From the skyscrapers to the museums, Melbourne is clearly Australia’s urban and cultural hub. Once again, I found myself wishing I had more time.

One of these days I will come back and drive the Great Ocean Road…that’s definitely on my list. But for now, I’ve decided to spend the next two days in Tasmania so early tomorrow morning it’s time to get back on a plane.

Goodbye for now, Melbourne! Until we meet again…