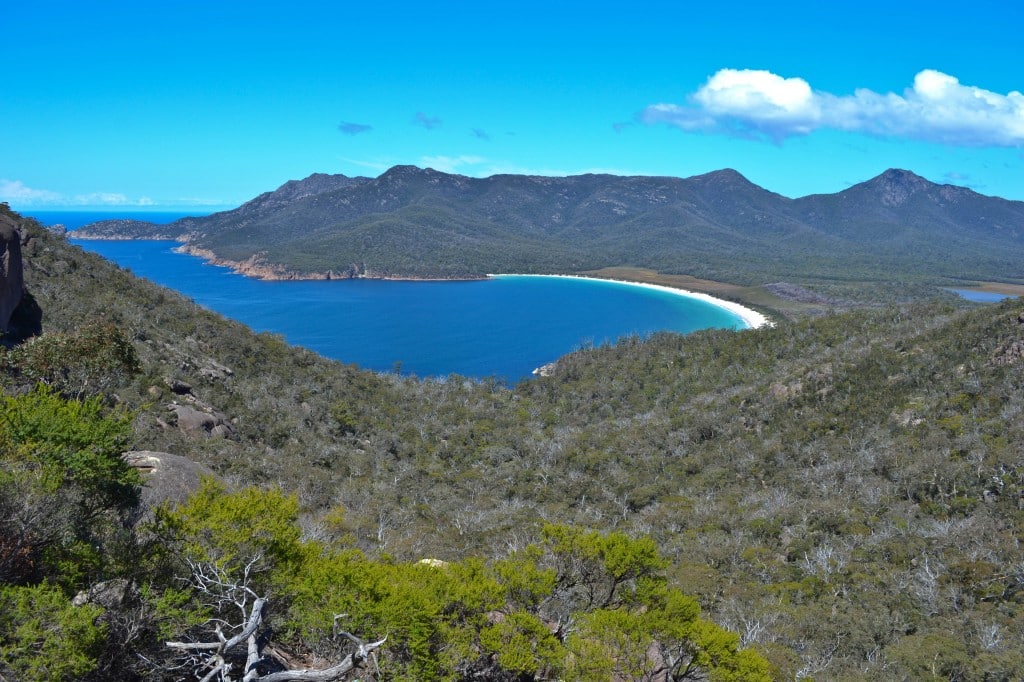 Today, the journey continues to Stop #12 on Round the World #7…Tasmania!

After a quick one-hour flight from my last stop in Melbourne, I touched down on the beautiful island of Tasmania.

Just under 200 miles south of the Australian mainland, the country’s only island state – nicknamed “Tassie” – has a unique and compelling history.

For more than 25,000 years, Aboriginal tribes lived here in isolation. Then, the establishment of a British penal colony in 1803 shattered that peaceful isolation.

In the years that followed, more than 700,000 men, women, and children were forced to migrate to Tasmania. In addition to the convicts, hundreds of penal administrators, civil and military officers, and their families arrived and made a lasting impact on the island.

Tasmania’s settlements prospered from the forced labor of the convicts who suffered brutal conditions at Port Arthur. Most of the convicts shipped here worked hard and eventually won their freedom, going on to establish new colonies as free citizens.

In 1856, Tasmania was granted self-government and the convict era finally came to an end. A period of economic growth followed, fueled by exports like wool, meat, fruit, and timber shipped from the bustling port of Hobart.

Visitors come here for the spectacular natural setting, adventure activities, and the island’s fascinating history. Tasmania’s parks and reserves make up a vast wilderness so spectacular is it listed as a UNESCO World Heritage Site.

The restored ruins of Port Arthur have been converted into a peaceful visitor attraction and remain a stark monument to Australia’s convict era.

For many of us who don’t know the story of the island’s difficult history, the word Tasmania first brings to mind the famous Tasmanian devil.

But unless you visit the Tasmanian Devil Conservation Park, you’re unlikely to get a look at the world’s largest carnivorous marsupial. Since the 1990’s, devil tumor facial disease has drastically reduced the devil population in the wild, leading them to be listed as endangered.

On my last trip to Sydney, I learned a lot about the Tasmanian devils and even saw a few at the Taronga Zoo. They’re about the size of a small dog and actually kind of cute.

Until you see their teeth, of course.

The perks of local advice…

I left a lot of planning for this stop on the itinerary until the last minute. Including where to stay for my one night on the island and what to see with just 24-hours to spare.

Luckily, fate intervened in the way of alert Tassie reader, Rachel. She heard I was coming to Tasmania and reached out with tons of helpful hotel suggestions and sightseeing advice. Bless her.

Things to do in Tasmania

For my one-day trip, Rachel suggested a choice between two options:

I chose to focus on the natural scenic beauty of Tasmania rather than its history, so I opted for the park.

Since time was short, Rachel recommended renting a car and making the drive to Freycinet National Park directly from the airport.

She had hoped to play tour guide for me but couldn’t get the day off work (darn!). Instead, she supplied handy driving directions and tips on all the best places to stop along the way.

The drive north to the park winds through softly rolling hills and scenic vineyards before meeting the coastline. It’s an incredibly beautiful drive and my progress is slowed by several stops for photos.

Thanks to all the stops, it takes a full 3 hours to reach the gorgeous Freycinet Peninsula.

Dominated by the 1500ft-high granite peaks known as the Hazards, it’s easy to see why Freycinet is so popular with visitors. Once inside the park, I pay my entrance fee at the Visitor Center and pick up a map.

With miles of pristine sandy coves and dramatic rocky outcroppings, Freycinet is a nature lover’s wonderland.

The peninsula is home to abundant wildlife including road-crossing marsupials and a large variety of birds. In addition to numerous campsites, there are dozens of hikes available ranging from short 10-minute walks ending at scenic lookout points to full day or overnight hikes with camping.

One of the most popular hikes is to the lookout point for the perfect arc of white sand known as Wineglass Bay.

Obviously, any bay involving my favorite type of glassware sounded like the perfect place to start my day in the park.

The steep hike up to the lookout point took 90-minutes round-trip on this spectacularly sunny day. Once at the top, my efforts were rewarded with a postcard-perfect view of the bay.

From there, I hike back down the mountain, hop in the car, and drive to some of the starting points for the short hikes indicated on my park map (sadly, the longer hikes aren’t realistic with my time constraints. Plus camping and I aren’t friends).

I round out the afternoon with a stop in the town of Coles Bay before heading back toward the capital of Hobart.

At Rachel’s suggestion, I booked a room at the Salamanca Inn in Hobart for my one night stay. Located steps away from the harbor, Salamanca is a lovely part of the city and the hotel turns out to be a brilliant choice.

Historically home to a generation of whaling clipper ships, Salamanca is lined with a long row of sandstone former warehouses along Sullivan’s Cove. Today, the neighborhood is the trendy home to art galleries, cafés, restaurants, and a terrific Saturday market (which unfortunately I missed).

I arrive at the hotel with just enough daylight left for a stroll around the tranquil harbor before sunset. From Victoria Dock to Constitution Dock, the restaurants along the waterfront are packed and lively as the sun sets behind the mountains casting a pinkish-orange glow over the sailboat-heavy marina.

It is completely gorgeous.

From there, I feel a magnetic pull into a nearby wine bar in search of a little taste of the Tasmanian grape.

My day flew by so fast there was no time for a proper visit to a winery so this will have to do. I mean what kind of travel writer would I be if I didn’t sample the local wine?

I take my job seriously people. You deserve to know about Tasmanian wine.

I sample a few varieties courtesy of the friendly Tassie bartender before selecting one and ordering a glass. The wines are quite good but I’m surprised by how expensive they are (compared to the nearby New Zealand wine region, anyway).

The next morning I finally get to meet Rachel in person!

We meet up for breakfast in Salamanca before she heads to work. It’s a fantastic time talking travel and comparing notes on our favorite destinations around the world.

Rachel and her boyfriend took a two-month tour of Europe last summer (or winter for her). She discovered my site while researching places to stay in Mykonos and has been following along with my travels ever since.

Side Note: Rachel and her boyfriend got engaged on that trip while in Paris at the Eiffel Tower. Today, they’re happily married with a daughter. I interviewed them both for my book, “Round the World in 30 Days: The Grown-Up’s Guide to Globetrotting.”

When Rachel realized Tasmania was on my upcoming Round-the-World itinerary, she immediately reached out to offer travel advice.

And I’m so glad she did! Her help was instrumental to my last-minute planning and it’s always exciting to meet people around the world who are reading and enjoying my little blog.

Wrapping up 24 hours in Tassie

I thoroughly enjoyed my whirlwind stay in “Dazzlin’ Tassie” as they call it.

There’s plenty to do here to fill an entire week or more. It’s a shame I just had one day to explore! I’d love to return someday and see more of the eastern coastline and especially to explore the convict trail and Port Arthur.

So much history amongst all that natural beauty.

But alas, it’s already time to head back to the airport. I have a full day in transit today to get to my next stop in Vanuatu.

My travel day includes a 5-hour layover back in Sydney where I’ll make the most of another shimmering sunny day and hop on the train to Circular Quay for lunch in Sydney Harbor. I can’t help but think my lucky streak with the weather has to come to an end at some point.

But hopefully, not until I get home.