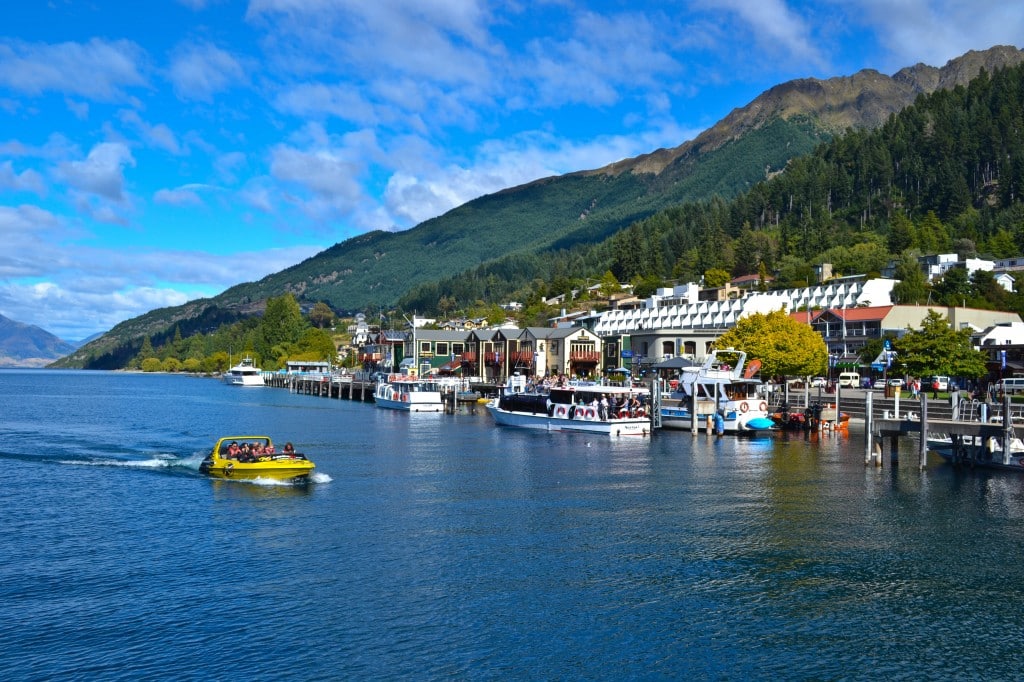 Yes, we’re nearing the end of my 7th annual 30-day trip around the world…but we’re not quite done yet!

Next up, one of my favorite countries in the world, New Zealand.

Still basking in the happy glow of Vanuatu, I land in Auckland mid-morning with plenty of time to savor an afternoon in one of the world’s best cities.

And while Auckland is a terrific destination on its own, on this trip it’s merely an idyllic stopover on the way to my true objective, the adventure capital of Queenstown.

But before I catch that flight to Queenstown tomorrow, I have one night in Auckland to enjoy what was shaping up to be a brilliant summer day.

First stop, the hotel. Located right at the end of Princes Wharf with marvelous harbor views, the Hilton Auckland is the perfect choice for an overnight stay in the heart of the city. I drop my bags in the room and head right back out to the Viaduct to enjoy the afternoon.

It’s a fabulous day capped off by a dinner of the best New Zealand green-lipped mussels on the planet – paired, of course, with a deliciously fruity Marlborough sauvignon blanc. Heaven on earth and the best meal I’ve had since Thailand.

The next morning, I’m off to the airport for the short hop down to the South Island!

The awe-inspiring views of Queenstown from the air before touchdown have me instantly wondering why I’ve never taken this short flight from Auckland before.

Originally a gold mining town in the 1860’s, today’s Queenstown is widely considered the adventure capital of the world. It also happens to be surrounded by a mountain range so remarkable it is actually called The Remarkables.

As I step out of the airport, the clean, crisp air and the fragrant aroma of pine engulf me.

The colorful downtown area is bordered by the bay of sparkling-blue Lake Wakatipu on one side and snow-capped mountains on the other. It’s easily one of the most visually stunning towns I have ever laid eyes on in all of my travels.

Where to Stay in Queenstown

Just across the lake from downtown Queenstown, the brilliant Hilton Queenstown Resort & Spa is a top choice for travelers. Situated directly on Lake Wakatipu, the resort has a sophisticated, yet homey, “modern lodge” feel with spacious rooms. Not to mention, majestic views of the lake and mountains.

It’s overcast and cool when I arrive at the hotel. With better weather expected in the coming days, I take advantage of the afternoon to plan out my adventures for tomorrow from the comfort of my lake-front room.

So what exactly is there to do in Queenstown?

If you’re not the adventurous type, you might be sorry you asked…

Things to do in Queenstown

Queenstown boasts a bevy of adrenaline-inducing activities that I, as a reasonable adult, would likely never attempt. These include (but are not limited to)

There are also less life-threatening, yet still exciting, activities like jetboating, luge rides, and river cruises.

Both bungee jumping (1988) and jetboating (1970) were invented in New Zealand and are the two most iconic activities to do while you’re here. Obviously, I will need to tackle one.

A jetboat ride? Now, that sounds more my speed (no pun intended).

A gondola ride up the mountain for some of those panoramic views over Queenstown is also on the must-do list.

Beyond that, I’m in need of some local advice.

So, I pop into the hotel’s activity center to peruse my options. Ultimately, I settle on a day trip to a few of the area’s top natural attractions for later in the week.

The next morning, sunny skies prevail and it’s time to get out and explore Queenstown!

The hotel’s convenient, free shuttle delivers me into town for a relaxed morning stroll along the charming waterfront area. The lake is amazingly clear and the downtown area offers plenty of interesting shops and cafes to visit.

Next up, a birdseye view from the southern hemisphere’s steepest cable car. From the Skyline gondola base station, I begin the steep ride up the mountain. The higher the car rises, the more stunning the panoramic views over Queenstown.

I’m not sure I’ve seen a better view anywhere in the world. Once I reach the top, I realize I could easily spend the whole day up here.

But of course, adventure calls and there is a luge ride with my name on it.

I hop on the chairlift to climb even higher on the mountain for the first of two luge rides purchased with my gondola ticket.

As it turns out, the luge rides reach speeds that are more than enough adrenaline for me!

By the time I finish at the luge, the paragliders have taken over the mountain. There are literally dozens of them flying around me near the top of the mountain. The billowing, colorful gliders manage to make an already spectacular view even more unbelievable.

What a terrific way to spend a day in New Zealand.

The village of Glenorchy

The next morning, it’s time to explore outside Queenstown with a day-trip to the countryside.

The first stop? A 45-minute scenic drive away to the village of Glenorchy.

Also known as the “Gateway to Paradise,” Glenorchy and the nearby town of Paradise served as part of Middle-Earth during the filming of the Lord of the Rings film trilogy.

This tiny, historic town is also the launching point for some of the best hiking in all of New Zealand, which is next up on today’s list.

The hike is an educational walk through ancient Beech forests. The forests are made up of trees that are not actually Beech but were mistakenly labeled as such by British botanists during colonial times.

Fascinatingly, there are no native animals to New Zealand other than a few bird and lizard species. All other animals were introduced to the islands mostly by the British and these introductions have wreaked havoc on the environmental viability of the forests. Conservation efforts continue to try to save the Beech forests.

After the hike, a 4WD tour of Mount Aspiring National Park is next up.

Mount Aspiring National Park is a beautiful expanse of back-country where some of the first Maori people settled.

It’s also known as New Zealand’s Hollywood. A long and distinguished list of movies and commercials have been filmed here including the Lord of the Rings trilogy, Vertical Limit, the Chronicles of Narnia, and many others. (Fun fact: those mountains in the Coors beer ads are in fact The Remarkables, not the Rockies.)

Through much of the summer, this part of the park is rented out to film crews from all over the world. None are filming today so we’re lucky to have the entire park to ourselves.

The final stop of the day is the one I’m most looking forward to…a hi-speed jetboat ride down the Dart River.

And I’m happy to say it did not disappoint in the adrenalin department. It’s 90-minutes of thrilling twists, turns, and 360° spins as we barrel our way through the mountains back toward Glenorchy.

Yes, I did get pretty wet on the ride but thank goodness they provide rain gear. You’ll need it, especially since that’s glacier runoff in the river (i.e. it’s freezing!).

It was an action-packed day and I’m beat by the time I make it back to the hotel.

A Queenstown Culinary Must – Fergberger

The next day, gray skies and thickening clouds signal an opportunity to sleep in and relax.

But, no trip to Queenstown would be complete without a visit to Queenstown’s most famous burger joint, Fergberger. So I can’t resist a lunchtime run into town.

Created 12 years ago by a young guy who was disappointed with the late night food options after a night out at the bars, Fergberger has morphed into a Queenstown institution. It’s a must visit when you’re in town. The restaurant is open 21 hours a day and you’ll find lines spilling out on the street during most of those hours.

The burgers are giant and delicious…and, by the way, that young guy is now a multi-millionaire. Just goes to show that sometimes even a drunk idea is a good idea.

Rumor has it he will never expand, so the only place in the world you’ll be able to try an authentic Fergberger is right here in Queenstown.

Wrapping up an action-packed week in Queenstown

From the hometown inventions of bungee jumping and jet-boating to the rush of paragliding through mountain peaks and any number of other death-defying activities, Queenstown has an electric vibe like no other alpine town.

Tomorrow, I begin the long journey home after another 30-day whirlwind trip around the word. Here’s a final wrap-up of what has been a truly amazing trip.

33
We use cookies to ensure that we give you the best experience on our website. If you continue to use this site we will assume that you are happy with it.OkPrivacy policy