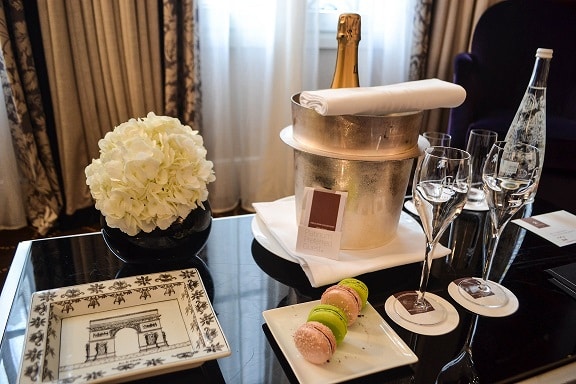 On the way to South Africa, I had 12 hours to kill in one of my favorite cities in the world – Paris. My original plan was to take the train into town – luggage in tow – and wander around the city for the afternoon, stopping for lunch at a crepe stand and a cozy dinner at my favorite little restaurant on Ile St. Louis.

It was a good plan, I thought, until my friends at Starwood interjected with a better one…come check out the newly renovated Prince de Galles Hotel which had just re-opened in May after a 2-year closure for a total overhaul. They were kind enough to offer lunch and a place to shower and store my luggage for the day but (to be honest) I didn’t need much convincing, it was too good an offer to refuse – so I didn’t.

So, after a 7 ½ hour very pleasant (although lacking any real amount of sleep) flight on Air France from Atlanta, I arrived in Paris right on time at 11am and made my way into the city on the train.

Just steps away from the Champs-Elysées, the Prince de Galles was built in 1928 and named for its original purpose, to welcome the Prince of Wales (future King Edward VIII, son of the King of England George V) to Paris during his annual stays. Originally designed during the Parisian art deco movement, a meticulous 2-year renovation has brought the hotel into the modern era while still showcasing classic design elements like the spacious patio surrounded by elegant mosaic work.

I arrived at the hotel a little after noon and stepped up to the front desk fully expecting to be given a key to their gym and shower facilities. Instead, they showed me right to a gorgeous suite. What a delightful surprise!

And, as if that wasn’t enough, the living room table was adorned with chilled champagne and delectable pastel-colored macaroons. Heaven! Maria from the front desk showed me around the suite which had everything a girl could ever need…including a plush-looking bed that I was afraid to look directly at in my current state of exhaustion. I had a lot to accomplish during my few hours in the city and I knew if I even sat down on that bed the rest of my day would be done. Plus, I had an 11-hour flight ahead that night which was when I needed to be sleeping to start adjusting to the time zone.

After a shower and a change of clothes I was feeling like a million bucks when I headed down to meet Emmanuel, the Executive Assistant Manager. Emmanuel had offered to show me around a couple of other suites before lunch so I could see more of the rewards of their 2-year renovation. Nearly a decade ago, I spent a weekend at the Prince de Galles while on a brief trip to Paris and I could hardly believe I was looking at the same hotel. It was certainly luxurious then, albeit by a more classic definition of style, but now it was pure modern sophistication.

The highlight of the tour was definitely the top floor 2-story luxury apartment with a spectacular terrace boasting nearly 360° views over Paris. The weather was remarkably mild for January and I enjoyed a few moments on that terrace inhaling the fresh air and admiring the Eiffel Tower and Sacre Coeur in the distance wondering what it must be like to live in an apartment like this in Paris. Sigh.

Our tour complete, we headed back downstairs to see the restaurant (La Scène) and bar (Les Heures) where Emmanuel introduced me to the Prince de Galles’ resident celebrity, Executive Chef Stéphanie Le Quellec. Barely 30 years old, Le Quellec is one of France’s most promising young culinary talents and winner of the inaugural French version of “Top Chef.”

The three of us chatted for a bit before I took her recommendation and ordered one of their “bento box” style lunches which creatively combine appetizer, entrée and dessert in one cleverly-designed dish. Not surprisingly, it was absolutely delicious.

After lunch, I thanked Stéphanie and Emmanuel profusely and left the hotel to take a stroll around the neighborhood. I couldn’t believe how lucky I was that the weather was so warm (nearly 60 degrees) especially since I wasn’t traveling with more than a light jacket.

After my walk, I retired to my room to address my overflowing e-mail inbox and later took advantage of the hotel’s extensive facilities with a visit to their gym (after all, I had dessert with lunch and there were still those macaroons staring at me in the suite to be dealt with.)

Once back from the gym, there was just enough time to enjoy my suite’s luxurious tub with a relaxing bubble bath, a glass of champagne and yes, those delicious macaroons, before heading back to the airport for my 11:20pm flight to Johannesburg (and connection to Manzini, Swaziland).

Emmanuel met me in the lobby and sent me off with a tiny gift box of more delicious macaroons (good thing I went to the gym!) and, since it had begun to rain, an umbrella-wielding bellman to escort me down the street to the entrance to the train station.

What a perfect way to spend a day in Paris. A huge thank you to Emmanuel, Stéphanie, and all of the excellent staff at the Prince de Galles for turning a simple layover into a luxurious mini-holiday at one of the city’s most exclusive addresses. I can’t wait to come back and actually spend the night.

Disclosure: Lunch and accommodations (for the afternoon) provided by the Prince de Galles Hotel.