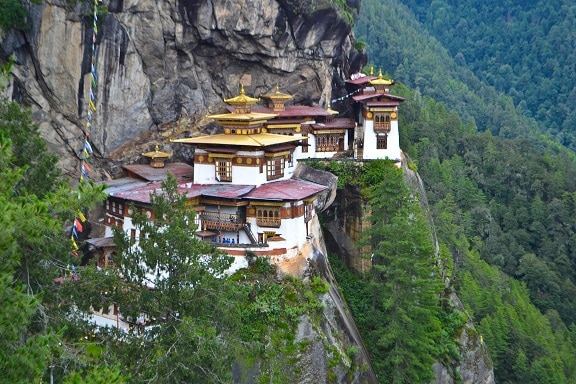 “How was the landing?” our guide, Tshering, inquires with a mischievous smile as we pile into the car.

He knows how the landing was. Like they all are at this tiny airport sandwiched between soaring Himalayan peaks. Rough.

In fact, Paro’s international airport (the only one in Bhutan) is known as one of the world’s most dangerous airports. Just 8 pilots in the world – all from the Bhutanese national carrier, Druk Air – are qualified to land there.

Strong winds whip through the valley and pilots have to weave through dozens of houses scattered on the mountainside and contend with a runway shorter in feet than the town’s elevation. All of these factors can result in a landing that some have deemed “terrifying.”

I wouldn’t call our landing terrifying, but I would definitely say that of all of my landings (and there have been a lot) it was by far the most alarming. The kind of landing that requires a stiff drink and a mastery of the brace position.

The kind of landing that leaves you wondering, “Did we land or were we shot down?”

Luckily, the only casualty was the lens cap sitting on the empty seat next to me which went flying on impact and was never recovered. RIP lens cap. You will be missed.

But we arrived safe and sound from Kathmandu and were now in the capable hands of our guide for our stay at Uma Paro, Tshering, and our driver, Karma.

Months ago, when I first starting planning my stop in Bhutan, I mentioned it to my friend Jill at London’s Sunday Times Travel Magazine and she said I must check out Uma Paro by COMO Hotels. When I looked at their website, I could see why Jill recommended it. It looked like a slice of Himalayan heaven nestled on a mountainside overlooking the valley. And now, all these months later here we were, in Bhutan and headed for Uma Paro.

Forget GNP, how about GNH?

Known as the “Land of the Thunder Dragon” Bhutan is the only surviving Buddhist kingdom of the Himalayan region and faith is an integral part of daily life. Surrounded by Himalayan peaks, sweeping valleys and pristine countryside, the entire kingdom is home to just over 700,000 inhabitants, 90% of whom are hill farmers living in villages.

Until the 1960’s Bhutan was completely off the tourism radar. In 1972, Jigme Singye Wangchuck ascended the Golden Throne and made a number of innovations intended to modernize the country by developing industry and agriculture. Perhaps the most famous is the measurement of the nation’s well-being not just by Gross National Product but by Gross National Happiness. And that’s not just a tourism motto, it’s an official policy passed by Parliament.

Bhutan is perhaps one of the most unique destinations I’ve ever visited. It’s the only country I’m aware of that requires a “Daily Minimum Rate” per visitor of $180 US per night plus assorted government fees, visa fees and surcharges.

All of this can add up to a pretty hefty price tag for longer stays and doesn’t even factor in what you’ll spend on airfare and hotel. But I figured any place with this steep of an admission fee had to be hiding something pretty special behind those golden gates.

With just two days to devote to Bhutan, we decided to stick close to the country’s only international airport in Paro. Sitting high above sea level at 7,500ft, the town of Paro is the Kingdom’s second-largest after the capital, Thimpu. Paro also happens to be the location of my primary objective for this trip, the magnificent Tiger’s Nest monastery.

Perched high on a sheer cliffside at 9,650ft, the Tiger’s Nest is one of the most sacred pilgrimage sites of the Himalayan kingdom and something I’d drooled over in pictures for years. I’d always dreamed of coming here to make the climb to see it up close and this was finally my year.

It was a quick ride to the hotel with a “free car massage” (as Karma called it) thrown in along the way thanks to a little road construction near the airport. We arrived at Uma Paro by Como – uma means “living house” – and were greeted warmly by our butler, Dhan, and the rest of the friendly staff attired in their traditional dress.

Bhutanese men wear the gho, a long gown belted at the waist, and women wear an ankle-length dress called the kira, which is hand-woven with rich traditional patterns.

Dhan gave us a quick tour around the hotel grounds before showing us to our villa (#16) perched high above the valley. We had booked a standard room and were beyond thrilled to be upgraded to a spacious two-bedroom villa. There are definitely a few perks to traveling the Himalayas during low season!

Our villa was simply spectacular and smelled of mountain air and eucalyptus, like a spa. With hardwood floors, hand-painted artwork on the walls and a spa treatment room cleverly converted into a comfortable second bedroom for Shannon we had the luxury of space for the first time in the trip. It was tempting to chuck the whole hiking plan for the next day and just lounge around in the villa enjoying the view.

But, of course, we came here for a reason and it wasn’t a massage…or was it? No, no, that wasn’t it. Hiking, that’s right.

Tshering had helpfully suggested a 1 ½ hour acclimation hike for our afternoon but we politely declined deciding to take our chances with the altitude the next day. So after settling in for a while, we headed down to the Bukhari restaurant for dinner to fuel up for the next day’s big hike.

We started out our first full day in Bhutan excited for our big hike. It was a perfect sunny day and we couldn’t have been happier about that. Since this is the middle of the rainy season, we were fully prepared to make the hike in heavy rain if we had to.

The 8th century Taktsang, or “Tiger’s Nest” is a highly revered Buddhist monastery built into a sheer cliff face at a dizzying height of 9,678ft. It’s the landmark of Bhutan and likely the only photo you’ve ever seen of this tiny Himalayan kingdom.

We arrived at our starting point at the base of the mountain in Paro Valley around 8:30am. Over the next 2-3 hours we’d be ascending more than 2,000ft from our current altitude of 7,500ft. Some people use horses for the trip to the top but not Shannon and I, we’d decided to tough out the hike figuring the reward would be all that much sweeter.

I once ran a marathon at 7,000ft altitude, it was a nightmare. I vowed then and there that I would never do anything athletic at altitude again (though it’s entirely possible I was delirious at the time). Yet here I was; staring up at a monastery that was a mere white dot on a cliff soaring above the clouds.

Tshering broke my daydreaming with a joke about Brad Pitt and Seven Years in Tibet (I suspect trying to distract us from the challenge ahead) and we were off. The first hour wasn’t so bad. Steep, yes, but we took short breaks for water and pressed on.

By the second hour we had reached the mid-way point and the geniusly-located café on the side of the mountain. At the café you can stop for tea, take a break and enjoy of a lovely restroom facility with an actual toilet should the need arise. We had a quick cup of tea, used the facilities and got back on the trail.

We could see our objective clearly now and were excited to press on.

Tshering had tried to tell us the second part of the trail was the easy part, with steps all the way up to the monastery. He was right about the steps, but wrong about the “easy.” What he failed to mention is that navigating from one mountain to the next (where the monastery is located) involves a significant descent, a bridge crossing and then a final ascent back up the stairs that lead to the monastery. It was beautiful, but challenging.

Colorful prayer flags were strung all along the trail and they increased in number as we neared the monastery. Prayer flags originated in Tibet and are found on mountain ranges all across the Himalayas. Traditionally, prayer flags come in sets of five, one in each color which represent the five elements: red for fire, blue for sky, white for air/wind, yellow for earth and green for water.

According to Tibetan tradition, health and harmony are produced through the balance of the five elements. Prayer flags are used to promote peace, compassion, strength and wisdom and Tibetans believe that the wind will spread the goodwill and compassion through all pervading space.

Despite the grueling final stretch of the hike, when we finally arrived at the entrance to the monastery, aching legs and ailing lungs were all but forgotten. It was absolutely magnificent. Just as I had always imaged it would be. It was a triumphant feeling to have finally reached the top.

You can’t bring electronics inside the monastery so we had to store our belongings in a locker before entering. We also had to don our rain jackets (which thankfully we hadn’t needed on the trail) since entrance requires covering your arms and legs.

Tshering walked us through the various rooms of the monastery regaling us with the folklore and legends associated with the site throughout history. It was a truly fascinating tour.

Eventually it was time to begin the hike back down the mountain which was far easier and quicker than the hike up (though definitely tougher on the knees). At the base of the mountain, we enthusiastically rejoined Karma and piled in the car for a few more “free car massages” courtesy of the less than level roads on the way into Paro town.

We made a stop in Paro to explore the town a bit and do some souvenir shopping before heading back to the comfort of our villa at Uma. Best. Shower. Ever.

That night we joined General Manager, Norman, and mascot Freddy for dinner in Bukhari before retiring to the villa and taking turns soaking in the decadent tub. We were tired but, all in all, in pretty good shape considering.

Sadly, the next morning it was time to say goodbye to Bhutan. After the smog and chaos of Kathmandu, Bhutan was a sanctuary of peace and sanity. It was the anti-Kathmandu and I could’ve stayed for weeks. Especially in that villa. Like the Everest flight, luck was on our side with the weather and we were so thankful to have enjoyed a perfectly gorgeous day for our hike.

Bhutan is so incredibly unique and I know for sure that I’ve just scratched the surface with my short visit to Paro. I may be leaving today for Thailand but the soul-cleansing spirit of Bhutan and the simple concept of measuring life by Gross National Happiness will likely stay with me forever.