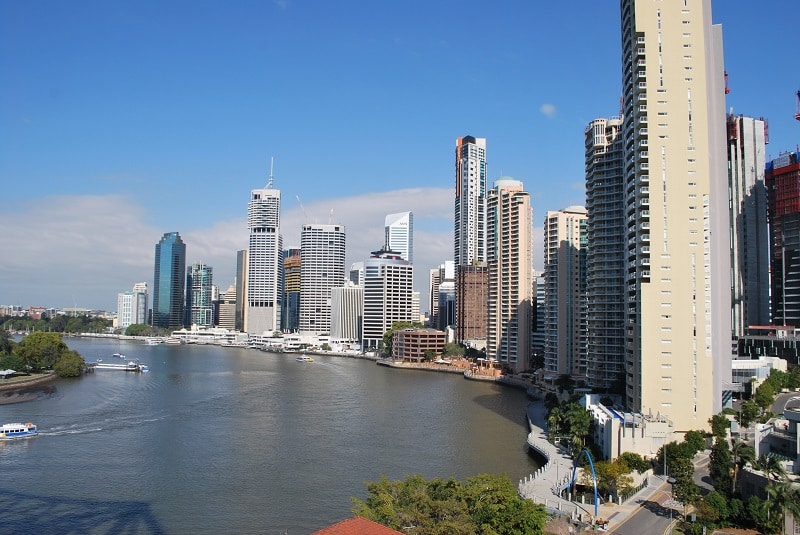 I was sad to leave the beautiful beaches of Fiji behind but also looking forward to a few days in the city of Brisbane Australia. After 11 days on remote islands, getting back to a big city sounded better than you’d think.

Like Sydney, Brisbane is pretty expensive but I’d found an apartment hotel called the Adina Apartment Hotel for my 3-night stay. Located right next to the Story Bridge, reviewers on Trip Advisor gave the hotel high marks for its views of the bridge and the skyline. And, as you know, I’m a sucker for a great view.

When I arrived at the Adina and checked into my one-bedroom apartment, I was pleasantly surprised – it was everything I’d read it would be and more. The best part was the large deck with sweeping views of downtown across the Brisbane River.

The second best part was the washer and dryer in the bathroom (may not sound like that big a deal but if you’d been living out of a carry-on suitcase for a month, you’d understand).

It was already 9pm by the time I settled into my room so I grabbed some dinner before crashing for the night.

The next morning I was up early and decided to go for a run along the waterfront. I hadn’t run since Auckland and I’d done a lot of lounging around on the islands so I was definitely due for a few miles. Right next to the hotel is the start of a boardwalk that runs along the Brisbane River through the city and makes for a perfect run.

After my run, it was time to head back down to the water to catch the river cruise to the Lone Pine Koala Sanctuary, my #1 plan for the day.

Since the sanctuary is more than 10 miles outside of downtown Brisbane, the combo river cruise/entry ticket ($55AUD) is the most popular way to visit. It was a gorgeous day so the one-hour river cruise to the sanctuary through some of Brisbane’s most prestigious neighborhoods was just perfect.

Lone Pine is the world’s first and largest koala sanctuary dating back to 1927. The sanctuary is one of the very few in the world where visitors are actually allowed to hold koalas for a fee.  Strict regulations ensure that each koala is not held for more than thirty minutes every day.

I was dying to hold a koala. I mean seriously, is there anything cuter? So, when the boat docked, I made a beeline for the photo area and gladly forked over my donation of $16AUS (which goes to their care) for a few minutes with a koala.

When it’s your turn, they tell you exactly where to stand and how to position your arms…and then they place the furry little koala right into your outstretched arms.

Holding that sweet koala in my arms as he nuzzled up to my neck with his cold nose (and innocently dug his little claws into my shoulder) was one of the coolest things I’ve ever done in all of my travels.

They snap your picture pretty quickly and then the photographer is kind enough to take a picture with your camera as well, if you like. This is a nice touch as a lot of these type places won’t let you do that.

After the picture, you get to hold the koala for a few minutes before your time is up. They are very strict about how the koalas are held and if you don’t do it just right (or if, say, you’re a kid who won’t do what the trainer tells you – like the one before me), you lose your turn.

There are more than 130 koalas at Lone Pine. They are separated into various habitat areas including Senior, Kindergarten, Mommas with Joeys (babies) and even a Bachelor Pad where just one anti-social male koala lives. (P.S.  I defy you to find anything more adorable than a Koala Kindergarten.)

For the most part, the koalas do a whole lot of sleeping. But each afternoon when the staff goes around to the pens to deliver fresh eucalyptus branches, the koalas come to life. I’d never seen them so alert as when new food was arriving.

After a couple of hours hanging with the koalas, it was time to take the boat back to the city. I spent the rest of the afternoon exploring downtown Brisbane.

Like Sydney and Auckland, Brisbane offers a bridge climb on their Story Bridge (the only 3 places in the world you can do this). Since my hotel was right next to the bridge, I had great views of the bridge climb groups from my balcony. If I’d had more time, I probably would have done that climb, too. Then I could have said I’d done all three!

The Beaches of the Gold Coast

Instead, I decided to spend my last full day of the trip at the beach. So I hopped a train for the 1-hour ride out to Australia’s Gold Coast and the beach of Surfers Paradise. I’d lucked out with the weather again and it was another sunny day in the low 80’s.

The Gold Coast area is very highly developed with hotels, condos, casinos, etc. In fact, it reminded me of a cross between Bondi Beach and Atlantic City.

I spent some time on the beach, had lunch and then headed back to the city to pack and do some laundry on my last night (never a dull moment in the glamorous life of the intrepid world-traveler).

I can’t believe this trip has already come to an end – it’s amazing how a month can fly by! It’s been an incredible trip and a big thanks to everyone who has followed along and posted comments. Hope you all enjoyed the pictures and stories.

My travel adventures will be all business-related for the next few months (after all, at some point I have to pay for all of this fun). But, fear not! Planning for RTW #6 next January is well underway.