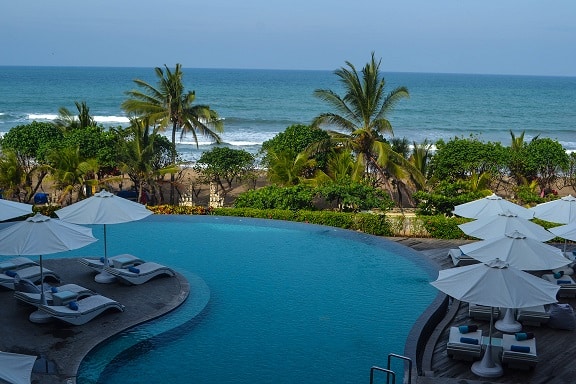 It’s been 4 years since my last visit to the “Island of the Gods” and it seems a lot has changed. New shopping centers, new condos and most notably, two new Marriott hotel properties – the Sheraton Bali Kuta and the Le Meridien Bali Jimbaran, both of which opened in the past year.

I’d originally planned on passing over Bali and spending four nights on the island of Lombok but when the Sheraton Bali Kuta invited me to drop by for a visit, well it was just too good an offer to refuse. I mean really, how can anyone be expected to say no to Bali? And after all, I was in the neighborhood.

After a 6-hour drive to the airport in Makassar and yet another severely delayed flight (come on Lion Air, get your head in the game) it was after 8pm by the time I landed in Bali. Thankfully, the Sheraton’s car was ready and waiting for the brief drive to the hotel.

Once I arrived, I was greeted warmly by the staff and ushered to a spacious ocean-front suite. After 3 nights on Sulawesi in a hotel that had power occasionally and running water, well, most of the time…it was literally heaven.

My suite was gorgeous and the bathroom had a giant tub that was calling my name. I couldn’t bear to leave it but they’d invited me to check out their Bene Italian Restaurant for dinner so despite the late hour I decided to grab a bite before calling it a night.

And I was so glad I did because I didn’t even realize how hungry I was until they started putting course after course of delicious food in front of me. I’ve been subsisting on rice and noodles for the better part of two weeks now and I think I’d nearly forgotten what good food actually tastes like.

After a few hours of sleep, I woke early for sunrise yoga on the pool deck. It’s just one of those things you have to do when you come to Bali, right? The yoga instructor was excellent and the sounds of the ocean nearby really enhanced my meditative experience. After my class I was even feeling energized enough to hit the fitness center for a bit before breakfast.

I spent the rest of the morning exploring the hotel and the downtown area of Kuta. The hotel’s design was just stunning, an effortless blend of modern architecture with traditional Balinese elements.

On my last visit to Bali I’d stayed at the lovely Westin Resort in Nusa Dua which is a quiet resort area well outside of town known for its long stretch of golden beaches.

While on the island, I’d visited the lush rice terraces of Ubud and several Hindu temples and really felt like I developed a good understanding of Balinese culture. I hadn’t, however, seen any of the Kuta area which is the flip side of Bali.

Kuta is home to nightlife, shopping, restaurants and hotels lining every square inch of beachfront. If Ubud is the soul of Bali, then Kuta is most certainly its heart. The tranquility of Nusa Dua was nice but there’s definitely something to be said for being in the center of the action in Kuta with everything right at your fingertips.

That afternoon, I visited the Sheraton’s Shine Spa to experience their signature 90-minute “Shine Massage.” It’s a decadent combination of Balinese and Hawaiian techniques and I was nearly comatose by the end…it was so wonderful. But there was no time for loss of consciousness, I had dinner plans!

While I was in town, the Le Méridien Bali Jimbaran Bay was nice enough to invite me over for sunset cocktails and dinner so at 6pm I headed over to Jimbaran Bay. After a tour of the hotel, I was treated to a Balinese dance performance as part of the hotel’s “Unlock Cultural Event” which showcases various aspects of Balinese culture each Tuesday and Thursday evening.

The cultural show was followed by cocktails with a view of the bay in the Sky Bar and a fantastic dinner at their restaurant, Bamboo Chic. By 10pm I was back at the Sheraton with my alarm set for another round of sunrise yoga.

After yoga the next morning the sun finally made an appearance. I’d been admiring the dreamy-looking pool since I arrived so it seemed like the perfect time to pay it a visit before I had to leave for the airport. It was just an hour but it was the perfect relaxing send-off.

My stay was all too brief but it was so great to get a look at these two beautiful new Starwood hotels and explore Kuta a bit. I have no doubt I’ll be back to Bali for more someday, it’s the kind of place you never really get enough of.

And rumor has it there’s a new Westin Resort & Spa opening in Ubud later this year…yep, I’ll be back.