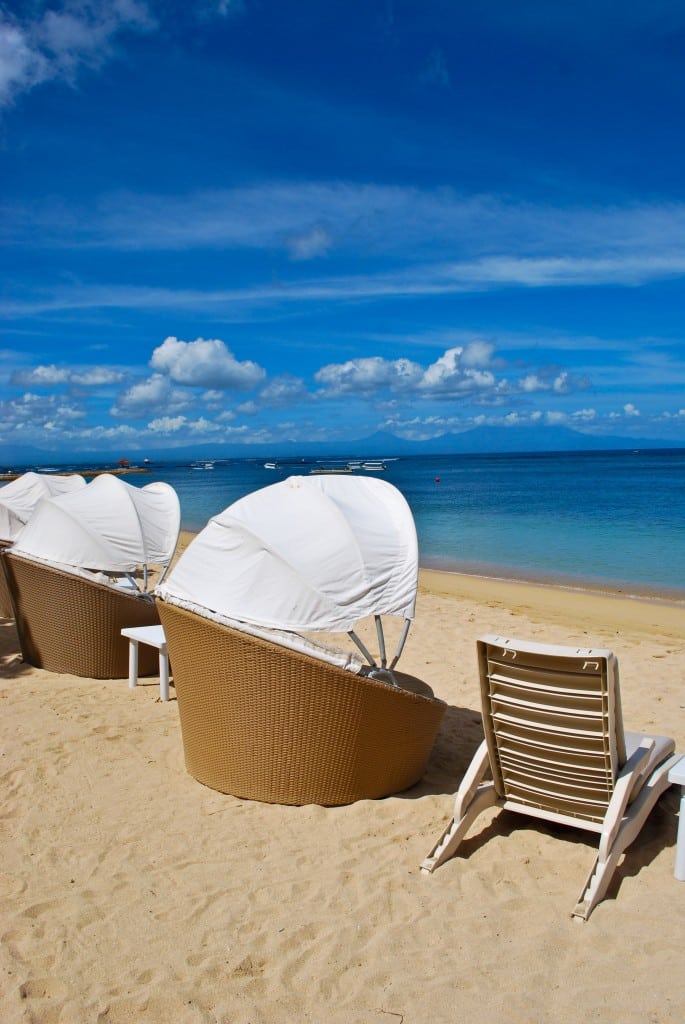 I hadn’t been on the ground 5 minutes in Bali before I began wondering why on earth it never occurred to me to come here before?

Known as the “Island of the Gods,” even the airport’s intricate stone carvings and temple offerings at every counter tell you right away that this island is unique.

My 3-hour flight from Kuala Lumpur couldn’t have been easier and within minutes of arrival I had completed my Visa on Arrival and was headed out to the arrivals lounge to meet my driver. For my 2-night stay at the Westin Nusa Dua in Bali, I’d done something I usually don’t – arranged for a hotel car to pick me up at the airport.

Typically, the hotel car service is horridly overpriced compared to just hopping in a taxi or on the train. But, when I got an e-mail from the Westin a few days before arrival asking for my flight info and inquiring as to whether I would like to be picked up for a cost of only $11 US, I decided to take them up on it.

Though I probably could’ve haggled my way into a cab for half that, $11 bucks was totally worth it to just have a driver waiting for me for once. A nice, stress-free start to my few days in Bali.

When I arrived at the hotel, I was greeted at the door by both a front desk clerk and a manager offering a warm welcome and an ice-cold hand towel and beverage. We were seated in the lobby for the check-in process while the manager explained the amenities of the hotel including the Royal Beach Club Lounge which I would have access to during my stay.

The Lounge turned out to be fabulous. They served full breakfast, lunch, evening cocktails and appetizers in there along with free wifi 24 hours a day. Perfect!

I’d been upgraded to a suite which wasn’t yet ready but they checked me into another room to use until it was.  I love it when hotels do this.  Most will just store your luggage and call you when the room is ready – but good hotels give you another available room while you wait.

I had heard wonderful things about the high level of service at Bali hotels and so far the Westin was certainly living up to that reputation.

I went to my temporary room to change and then headed down to the lobby to arrange for a car to tour the island the next day. Normally, I would have just rented a car myself to drive around the island, however, I’d seen a number of advertisements at the airport offering cars with a driver, guide and all fuel included for around $40 US for 6 hours.

It seemed like a pretty good deal to save myself the time of figuring out where to go and how to get there. Plus I always love to take the opportunity to hire a personal guide in countries where it’s especially affordable. The hotel’s tour desk was able to arrange a car for me for the next day so, since it was now almost 2pm, I decided to spend the rest of the day “exploring” the Westin’s beach and pool.

After just a few minutes on the beach, I discovered that the #1 thing to do in Bali appears to be enjoying a local Bintang beer while relaxing on the shore of the spectacular Indian Ocean. Always one to “do as the locals do” I joined the crowd. It was a lovely way to ease into the relaxed Balinese lifestyle.

I think I could get used to this.

The next morning I awoke early for breakfast in the lounge before meeting my guide for the day, Roi, in the lobby. We had six hours to fill and the itinerary was totally up to me. I told Roi that I had three things I really wanted to see but I would leave it up to him as to how best to go about it.

My #1 priority was visiting Bali’s ubiquitous rice fields. Since that would require almost a 2-hour drive each way, it limited the rest of our itinerary.

I also wanted to visit a Balinese temple so Roi suggested one that was located near the rice fields we would visit. And then, finally, I wanted to see the beaches of Seminyak and Kuta on the western side of the island. Though the driving distances aren’t necessarily prohibitive in Bali, the traffic often can be, so much of our day was spent in the car.

The long drive up to the terraced rice fields north of Ubud was definitely worth the investment. They are Bali’s most photographed attraction and what the average person visualizes when they think of Bali.

The classic Balinese terraced growing system (called subak) allows the water to flow from one field to the next ensuring that every farmer gets enough water for his field. Though practical in nature, the visual effect of the terraces is stunning.

After leaving the rice fields, our next stop was the nearby Gunung Kawi temple. Like the rice fields, religion in Bali is everywhere. While the majority of Indonesia is Muslim, Hinduism is practiced by more than 90% of Balinese.

There is a temple in every village and a shrine in every field. Small, delicate offerings of flowers, rice and incense to the Gods can be found at every corner – and you really have to watch where you’re going so as not to step right on them!

The temple of Ganung Kawi was a lovely example of the traditional open-air Hindu temple including a holy water pool for bathing and elaborate stone carvings and shrines. As we walked through the temple, I was happy to have Roi with me to explain the different areas of the temple and what they were each used for. This was my first visit to a Hindu temple and I found it to be really interesting. Very peaceful and serene.

Next, it was back in the car for the hour-long drive to the western side of the island to the surfer-laden beaches of Seminyak.

Though the town of Seminyak was very upscale and charming, the beach turned out to be much less attractive than my own hotel’s beach in Nusa Dua. It’s primarily meant for surfers because of the big waves on that side of the island but the beach itself is a bit dirty and unappealing.

Luckily, I had the Westin’s beautiful beach to head back to. We returned to the hotel around 3pm and I spent the rest of the day enjoying the hotel’s beach and pool…with another Bintang, of course!

For my final day, I decided it was time to head into town and hit the markets for a little shopping. I hadn’t really done any shopping on the trip so far and since this was my first time in Bali I figured this was a good place to pick up a few gifts and other things.

I always have to be careful with how much I buy since everything still has to fit in my already over-loaded carry-on suitcase. But I did manage to pick up a few things that were suitcase-friendly before heading back to the hotel to pack for my flight.