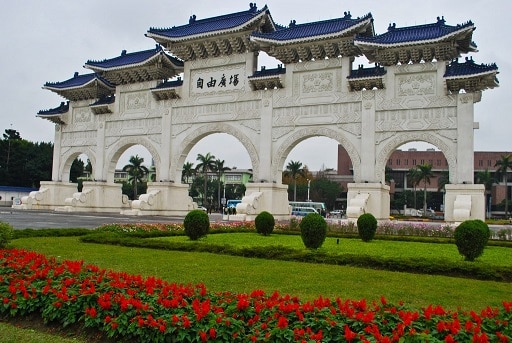 I didn’t have especially ambitious plans for my 24 hours in Taipei. Kind of a random choice as a stop, I know, but it was one of those Asian cities on my to-do list so I decided to squeeze it in between tropical locales this year. It was time for a “city-break” and a return to high-rise hotels and actual high-speed internet.

Upon landing in Taipei from my blissful stay in Bali, I was surprised to see that for such a hi-tech city, the airport was not nearly the modern facility I’ve become accustomed to in major Asian capitals.

There was, however, an enormous tourism desk staffed with a dozen helpful agents who checked my hotel reservation on a list, provided me with a good city map and suggested a bus to the city that made a stop right in front of my hotel.

I was a little disappointed there was no train to the city, just the bus or a taxi. But, at only $2.80, the bus was definitely the cheapest airport transportation I’ve ever taken.

It took a full hour to get to my hotel, the gleaming Sheraton Grand Taipei. But it was a pleasant enough ride and I decided that I’d take the bus again back to the airport the next day. If nothing else, the price was certainly right!

I didn’t really have a game plan for my day in Taipei, just figured I’d get a map and ask the concierge for advice on the major sights. After settling into my room and taking a quick shower, I headed out into the city armed with my map and a few helpful suggestions from the concierge. The weather was decidedly overcast but I was just grateful that it wasn’t actually raining.

The history of Taipei

Taiwan has an interesting history. The Dutch occupied and ruled Taiwan, known then as Formosa, from 1624 to 1661. The Dutch were routed from the island in 1661. Taiwan then became, rather loosely, a dependency of the Chinese Empire. In 1885, the island became an official province of China. In 1895, following a Japanese invasion, Taiwan became a Japanese colony.

This situation continued until the defeat of the Japanese by the Allied forces in 1945. Following the exit of the Japanese, control of Taiwan was vested in the hands of Chiang Kai-shek’s Kuomintang government, which presided briefly in mainland China.

The People’s Republic of China (PRC) came into being when the rebel forces of Mao Tse Tung overran and displaced the corrupt and decadent regime of the Kuomintang in 1949, which then fled to Taiwan. The Kuomintang-dominated government ruled Taiwan, as a government-in-exile from the mainland, until the first ethnic Taiwanese president was elected in 1996.

Taiwan’s political situation is complex. In recent years, Taiwan has embraced its native culture and ushered in an era of growing “Taiwanization” in politics. Most Taiwanese now prefer separation from China rather than unification.

But fears still persist that Beijing will use force to stop Taiwan from asserting itself on the world stage. Despite these fears, the country’s economy has grown exponentially in the past few decades giving Taiwan recognition as one of the 4 “Asian Tigers” in the region.

Anxious to get out and explore this “Asian Tiger,” my first stop was walking distance from my hotel, the Chiang Kai-shek Memorial Hall.

Encompassing the National Theater, National Concert Hall, Chiang Kai-shek Gate and Memorial, the plaza was packed with people on this Saturday afternoon. The Chinese architecture of all 4 buildings was ornate and vibrantly colorful and the plaza elaborately landscaped, it was a beautiful area to wander around.

My next stop required a little navigation of the Taipei metro system. It turned out to be pretty simple and at only $.60 per ride, quite a bargain.

My destination was Taipei 101, the city’s iconic skyscraper and – until two weeks ago with the opening of the Burj Dubai – the world’s tallest building. As I exited the train station at the City Hall stop, I stopped to look around and get my bearings on which direction to go.

A girl who had walked out just in front of me seemed to be doing the same thing and turned to ask me if I knew which way to Taipei 101.

“Not really,” I said, “But it’s the world’s 2nd tallest building, how hard could it be to find?”

We laughed and decided to try to find it together. Her name was Robin and she was in Taipei on business from Seattle. Like me, she had just gotten in today and this afternoon was her only chance to get out and see some of the city before starting work the next day.

Taipei 101 turned out to be a little harder to find than we thought. With the cloud cover today, the top of the building was intermittently obscured by clouds. But, it didn’t take us too long to find and after taking a walk inside and seeing the insane line to the observation tower we decided to skip it.

After all, considering the weather, we were unlikely to be able to see much from the top anyway.

Since Robin and I were kind of on the same sightseeing plan for the day, we decided to continue on to a few more stops together.

Our next stop was a nearby street market where we had a little snack from a street vendor grilling meat on a huge round grill. Then we visited the Sun Yat-Sen Memorial Hall next door before hopping back on the train to check out the temple that both of our concierges had recommended.

Longshan Temple was only a few stops away on the metro but it was a world away from the skyscrapers of central Taipei. The ornate temple was overflowing with worshippers, colorful floral offerings and wafting incense. It was amazing and unlike anything I’ve seen before. I’m pretty sure Robin and I were the only tourists in the entire places, it was full of worshipping locals.

It was getting dark by this time and I was fading fast since I’d spent the last night on the plane.

But I decided to hit one more stop with Robin before calling it a night. The Huaxi Street Night Market (better known as the “Snake Street Market”) was just getting underway next door to the temple so we took a walk over there to check it out.

We weren’t entirely sure we were on the right street until we actually did see a restaurant with an enormous python in a glass case at the front. Yikes!

There was a big sign saying “No Photos” but I did manage to get one or two from an angle where the owner couldn’t see me (sneaky American that I am). Apparently snake is a delicacy in this part of the world but I had no plans to include it on my culinary tour.

Finally, we hopped back on the metro and got off at the Central Station next to my hotel. Robin wanted to see the nearby Chiang Kai-shek Memorial I’d told her about and I was ready for bed so we said goodbye there.

It was nice to have another American to spend the afternoon walking around with, we had a lot of fun.

It’s funny that’s she’s now the 2nd person who has asked me for directions on this trip and turned into a travel buddy for the day.

I just have one question, though, where are all the hot guys in need of directions?? Ha-ha. But, seriously, it was a great day and I really enjoyed my brief stop in Taipei. Though I wasn’t there long, I think I really got a good feel for this vibrant city.

The next morning I slept in a little, had breakfast in the lounge and went to the concierge desk to mail a few things back home. Time to lighten my load a bit by shipping home guidebooks, maps, city info, etc. from previous stops.

After shipping home a whole large Fed-Ex envelope, my suitcase still didn’t seem to be much easier to close…what’s up with that?

I caught the bus back to the airport for my short flight to Seoul and then 12 hour overnight flight to Auckland.

Can’t wait to get back to the land of the Kiwis!