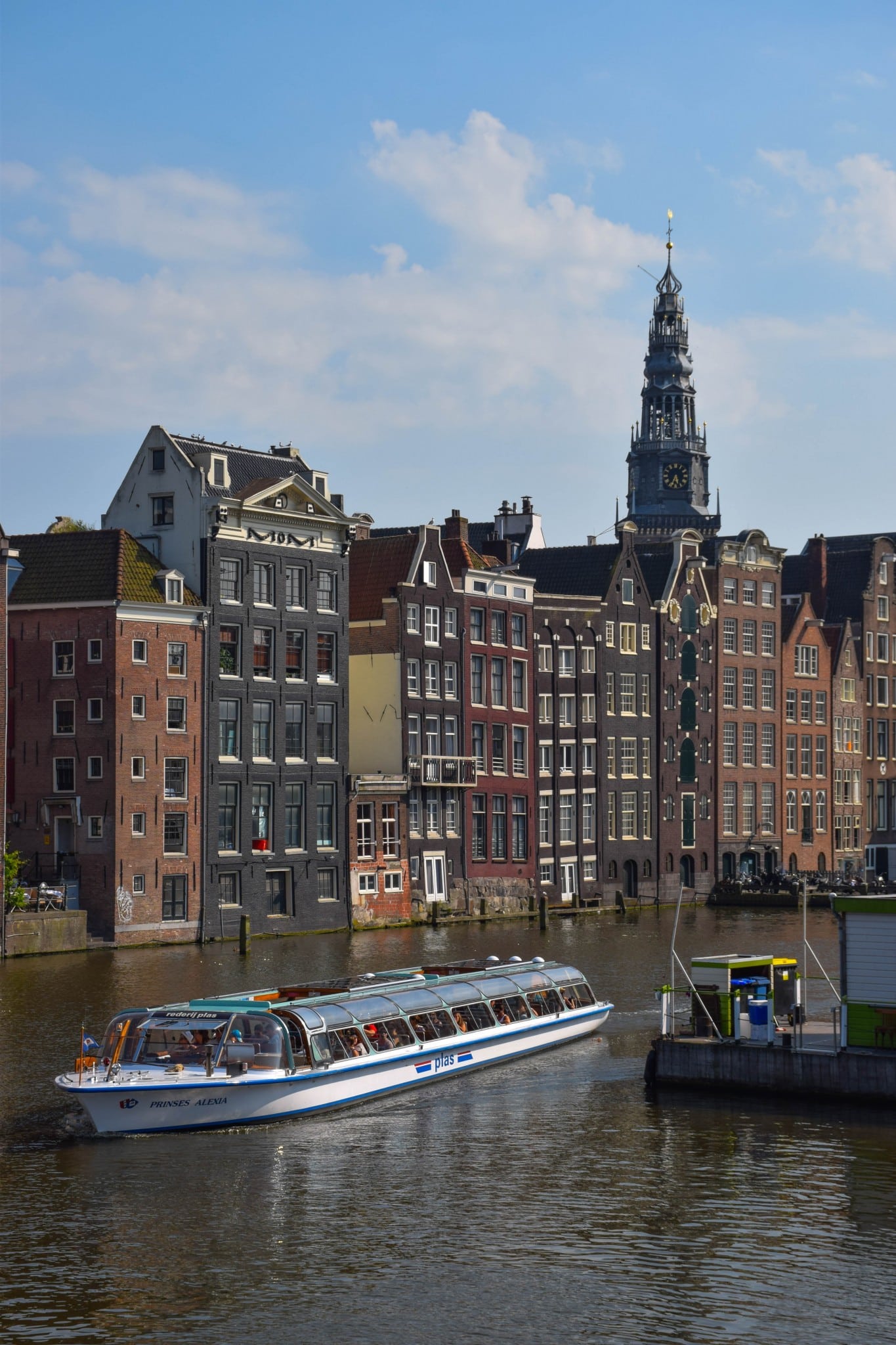 Ahhh, Amsterdam. It’s the kind of city that mesmerizes even the most jaded of travelers.

With its historic, narrow row houses, hordes of cyclists, endless canals and teak-framed boats captained by commuters or sun bathers on any given day, it’s one of Europe’s most glorious cities.

The bustling Red light district and not-quite-legal aromas wafting from the coffee houses are the draw for many. But for me, it’s the timeless beauty of the canals and the incredible architecture that keep luring me back.

Plus, when you’re traveling around the world on a 3-month honeymoon extravaganza, a layover in Amsterdam is pretty much a logistical certainty.

Our long flight from Colombia lands at 2:00pm and with a flight to Scotland scheduled for early tomorrow morning, we’re hoping to maximize our time in the city.

For that reason, we chose the Sheraton Amsterdam Airport Hotel for our stay. Not only is it one of my favorite airport hotels in the world, it’s also connected to Schipol Airport. And that makes our early flight tomorrow morning that much easier.

Trains from Schipol Airport into the city center are fast and frequent so using the Sheraton as our base just makes good sense. Plus, they were kind enough to invite us for dinner at their posh Voyager restaurant tonight as a honeymoon gift.

We land right on time, check into the hotel, and enter the train station to the city in under an hour. Twenty minutes later, we hop off the train in the heart of Amsterdam’s city center.

It’s a beautiful, sunny day and we make our way straight to a row of canal boats boasting a variety of tour options. Though I’ve visited the city twice before, I’ve never done an Amsterdam canal boat tour.

What better way to make efficient use of our limited time and cover the most ground? Or water, in this case.

Often referred to as the “Venice of the North,” Amsterdam is the world’s most watery city with canals and harbors covering a quarter of its surface.

The Dutch capital’s 17th century Canal Belt forms concentric half-circles around the city and is a marvel in both engineering and city planning. All this engineering magnificence landed the city center on the UNESCO World Heritage List in 2011.

In addition to more than 100 kilometers of canals, the area includes 90 islands and nearly 1,500 bridges. With this in mind, it’s easy to understand why the Amsterdam is best viewed from its greatest feature…the canals.

Finding a tour boat is quick and easy (there are tons to choose from!). Within 15 minutes we are comfortably seated on a glass-enclosed canal boat and headed out of the harbor.

Over the next hour, the canal boat takes us through all of the city’s main canals. We cruise along the Prinsengracht, Keizersgracht, Herengracht and Jordaan and pass many of the city’s primary monuments and historic buildings.

It’s a sweltering summer afternoon and it seems like all of Amsterdam is out enjoying it. The canals are thick with boat traffic. From locals catching a few rays in their small motorboats to swimsuit-clad twenty-somethings on large, catered party boats, it’s quite a scene.

After our canal cruise, we take a walk through the city’s other main attraction – the Red light district.

It may come as a surprise, but Amsterdam’s famed Red light district is more than just a haven for the backpacker set and host to bachelor party debauchery. It’s actually the city’s oldest historical district.

While most ancient cities have turned their medieval city centers into living museums, Amsterdam’s was taken over by the sex industry with the opening of the first brothels in the 15th century.

Today, a major renovation, known as Project 1012, is taking place in the Red light district that aims to reduce prostitution rates and highlight the area’s rich history.

As we stroll along the district’s canals, I can really see a difference from my last visit more than a decade ago. I remember a much seedier area, the kind of place you wouldn’t walk around on your own after dark.

But today it seems brighter, cleaner and with more non-sex-industry vendors like shops and restaurants. And there’s no denying the natural beauty of the area, along some of the city’s most scenic canals.

But, of course, there is still the persistent barrage of stag party groups. These typically include a groom dressed in garish drag and his “friends” cheering him to inebriation in matching t-shirts to commemorate the event.

I suppose some things about this neighborhood will never change. And you probably wouldn’t want them to. After all, it’s part of the fun of Amsterdam for many people.

But I’d say the changes they’ve made so far definitely elevate the area to a kinder, gentler Red light district.

Dinner at the Sheraton

We stop at a pub along a canal for a beer and then realize it’s approaching 7:30pm. With such an early flight looming, we decide to head back for dinner.

By 8:30pm we’re back at the hotel and ready for dinner at Voyager.

The restaurant has a perfect view of Schipol’s busy runways and we enjoy watching the flights come and go from so many corners of the world. It’s a tremendous meal capped off with a special dessert prepared by the chef to celebrate our honeymoon.

All in all, we couldn’t have asked for a better day in Amsterdam.

Read More: The Hague: Holland’s Royal City by the Sea

Layovers like this one are one of my favorite perks of Round-the-World tickets. And luckily, we’ve got another one coming up in Paris in a few days.

But for now, we’re off to Scotland…next stop, Edinburgh!