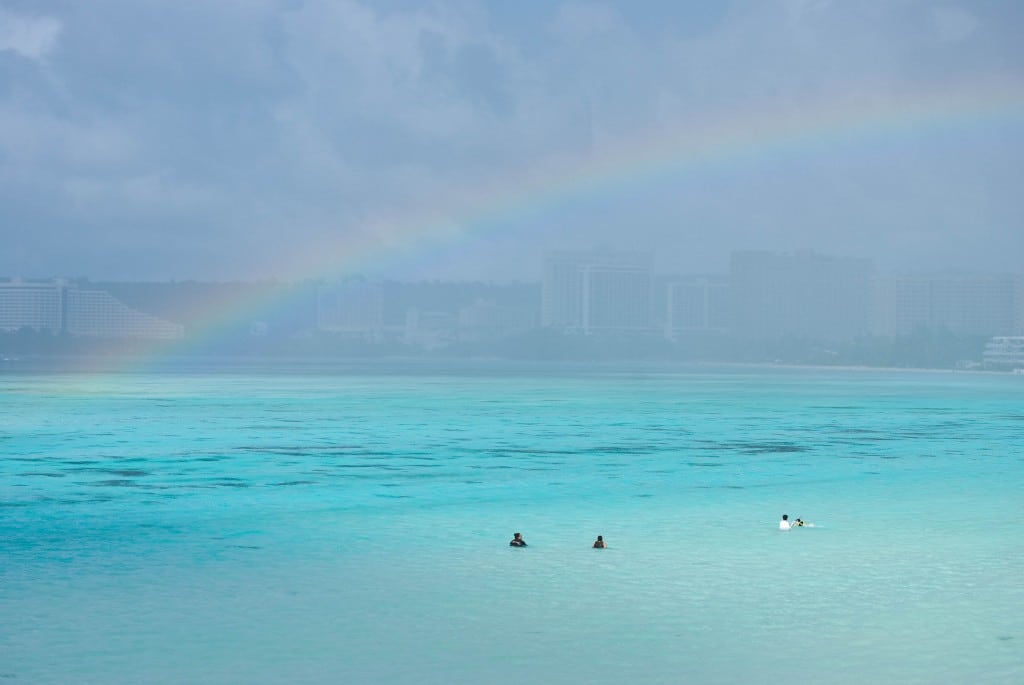 I’ve just about reached the halfway mark of this 6th annual 30-day trip around the world.

Today, I’ve got a one-day layover on the lovely island of Guam on the way from Palau to Seoul (and ultimately, Auckland).

It’s not enough time to do the island justice, of course. But it is a convenient opportunity to see a little of a new destination courtesy of an inconvenient flight routing.

But before arriving in Guam, my flight from Palau makes an interesting stop on the island of Yap.

I’ve not heard of Yap. But let me tell you, when we roll up to the “airport,” what seems like the entire royal family boards the flight draped in crowns of flowers and leis.

I’m still not sure if all the flowers mean they are A) a wedding party B) the actual royal family or C) just making an everyday Yap fashion statement.

As the Yap passengers board, one flower-draped islander turns to another behind him and snaps a photo. He rattles off a string of words I don’t understand followed by one that I do, “Facebook.”

Yes folks, even Yap is on Facebook. But, I digress. Back to Guam.

Located in the North Pacific Ocean, Guam is the largest and most populated of Micronesia’s Mariana Islands. While it’s a whopping 5,800 miles off the coast of San Francisco, it’s still a part of the USA.

What is Guam known for?

As an unincorporated territory of the United States, Guam serves an important strategic military purpose. Both the US Navy and the US Air Force have installations on Guam. Combined, these two installations occupy nearly 30% of the island’s total land mass.

Since 1950, Guam has been governed under the Organic Act of Guam.

When we finally land in Guam it’s almost 6am. I make it through immigration and customs quickly and decide to see if there are any rental cars available.

I haven’t made any advance plans for my day on Guam figuring I’ll just sort it out when I get there.

That turns out to be a lousy idea as there are no cars available anywhere.

It’s looking like my tour of Guam will be limited to what I can reach from the hotel. Luckily, the beach where I’m staying – Tumon Beach – is widely considered Guam’s most beautiful beach.

A one-day layover in Guam

My stopover in Guam is really just a day trip. I have yet another redeye flight coming up at 3am tonight.

For those of you keeping score at home, that’s 3 nights of redeyes in a row.

But even though I’m not actually spending the night here in Guam, I still reserved a hotel room so I can at least grab a nap and have somewhere to store my bags.

Where to stay in Guam

I hop in a cab to the Marriott Resort (2017 Update: the Marriott is now the Pacific Star Resort & Spa) and am very excited when they’re able to check me in at such an early hour.

I’m upgraded to a roomy suite which has a terrific view but, like the entire hotel, is somewhat in need of a renovation. Outdated and poorly-reviewed hotels seem to be a recurring theme here in Guam. But there are a few exceptions for those looking for a more luxurious option.

For modern amenities, the island’s newest luxury hotel, The Tsubaki Tower, is the best option.

And for beachfront resort amenities, the “Dusit duo” of the Dusit Beach Resort Guam and the Dusit Thani Guam Resort are both great choices for a beach vacation.

Though my quick visit falls during the December-June dry season, it’s currently raining buckets outside. And since I’ve been on a plane all night, a nap is definitely in order.

I awake a few hours later to slightly better weather (no rain but no sun either) and try to summon the desire to play tourist in Guam.

Just as I’m failing miserably at that, I walk out onto my balcony and see the most beautiful rainbow over Tumon Bay below. It turns out to be the first of three and pretty much the theme for my day.

Though I don’t have any wheels, the resort area of Tumon Bay is a great place to explore in its own right. So, the least I can do (literally) is head out and explore my immediate surroundings for the day.

The sun comes and goes all day with bouts of rain showers in between. But it’s still a great day at the beach. I walk from one end of the bay to the other and do a little swimming in the gorgeous clear blue waters.

I also discover the distinctive St. Laguna Chapel, known as the “Rainbow Chapel.” It’s one of Guam’s most recognizable landmark buildings and a popular wedding chapel on the island.

The Tumon Beach area reminds me a lot of Waikiki in Hawaii but without the fancy resorts. It’s interesting that Guam has such amazing natural beauty but the hotels and resorts seem decidedly outdated.

Wrapping up a quick stop in Guam

Regardless of accommodation, the island is lovely and feels so undiscovered (especially compared to Hawaii!). I just wish I had the time and the transportation to explore it further.

I would have liked to visit Two Lovers Point and Chamorro Village, or learned more about Guam’s WWII history at the Pacific War Museum.

But even though it’s a quick visit, it’s nice to briefly be back where English is the primary language and I can use American dollars again. Almost like a layover at home.

After a sunset dinner, I try to squeeze in another nap before my 3am flight to Seoul.

Two more nights on a plane and I’ll finally be in Auckland. Can’t wait!

183
113
We use cookies to ensure that we give you the best experience on our website. If you continue to use this site we will assume that you are happy with it.OkPrivacy policy