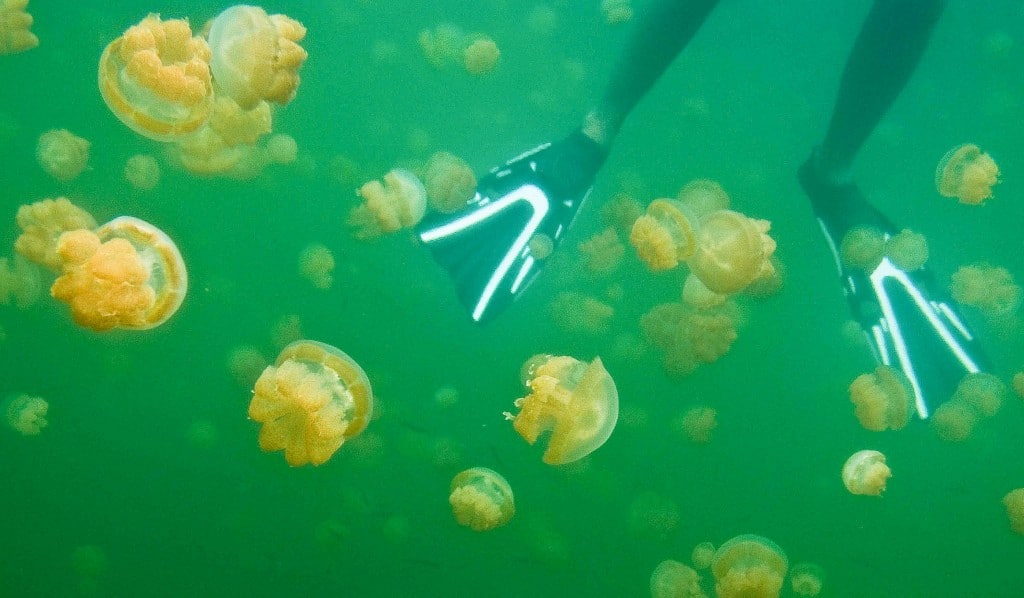 After days of rain in the Philippines, when I landed in Palau at 2:00am the most positive thing I can say about the weather is that it was not raining sideways. It was, however, raining in a circular motion reminiscent of something I may have seen on the Discovery Channel. Seriously, I have video.

Come on Palau, you cannot be serious.

The good news was that at least a driver from my hotel, the Palau Royal Resort, was waiting to greet me – a welcome relief at this ridiculous hour. By the time I got to the hotel and settled into my lovely room it was after 3am.

I had scheduled a full-day outing with Sam’s Tours (the primary diving outfit on the island) for a tour of the Rock Islands and Jellyfish Lake, but with the weather, I wasn’t sure we’d even still be going.

After managing 2 or 3 hours of sleep, I awoke to slightly better weather outside and sure enough, someone from Sam’s was at the hotel to pick me up at 8am. When I arrived at the marina, I was introduced to my guide, Malahi, and the couple from France who would make up the rest of our small group.

We climbed into our boat and headed out for a day on the water.

The Rock Islands of Palau are a grouping of more than 200 limestone and coral islands dotting Palau’s Southern lagoon. These uninhabited islands are famous for their beaches and dive sites. Though it was an overcast day, cruising through the soaring limestone cliffs with their emerald green waters was still a gorgeous sight.

After riding through the islands for about an hour, we stopped at two different snorkeling spots and spent some quality time at each. The water was so clear compared to my snorkeling attempt in the Philippines. Tons of colorful fish and coral to look at, it was easy to lose track of time.

Later, we met up with a few other groups on a small island with a beach and picnic facilities for lunch before heading on to what I was most looking forward to – our trip to Jellyfish Lake.

More than 12,000 years old, Jellyfish Lake is filled with millions of migrating golden jellyfish. Due to a lack of natural predators, the jellyfish have evolved over the millennia without the ability to sting. They never needed to!

It is one of several marine lakes like it in Palau but the only one that can actually be visited. A swim in the lake was featured in two episodes of the TV show Survivor as a reward for winning a challenge. Palau is the only place in the world where it is possible to swim among these harmless prehistoric creatures.

Having grown up along the beach in Florida, I was trained at a young age to beware of jellyfish. And I well-remember the pain from those few times when I was stung.

With all that in the back of my mind, we made the hike from our boat up a steep and rocky hill with the help of a rope railing staked into the ground. It’s a steep hike up then another steep descent to reach the lake’s simple dock.

Once there, Malahi and I slipped into the water and made our way to the center of the lake where she assured me we’d see tons of jellyfish. (I should note here that the French couple declined to get in the lake because they were “cold” and didn’t want to get wet again. Seriously, France?)

When I first put my mask on and peered under the water, I was disappointed to see nothing in the murky green waters. After the gorgeous, clear blue waters we’d been snorkeling in all day I thought, “how are we ever going to see anything in this?“

But Malahi isn’t a guide for nothing and as we reached the center of the lake, pale pink forms came into my view by the hundreds, then thousands, then seemingly millions (turns out, there are in fact millions). I was awestruck. So much so, that it took me a while to even be able to pull out my camera. It was almost other-worldly to see these alien-like forms floating past and completely encircling you.

It’s almost like you’re floating through some sort of alternate universe. Your impulse is to recoil when they innocently bump into your legs until you remember that they can do you no harm. Malahi and I had the lake all to ourselves while we were there. As we were leaving, another group was descending the steep hill hoping what awaited them was worth the climb. It would be.

The lake was, without a doubt, one of the coolest things I’ve ever done in all of my travels. I’ve never experienced anything quite like it and I’ll surely never forget it.

With our trip to Jellyfish Lake complete, we headed back to the marina. It was a fantastic day, but I was looking forward to getting back to my room for a shower, some dinner and a nap before my 1am flight to Guam.