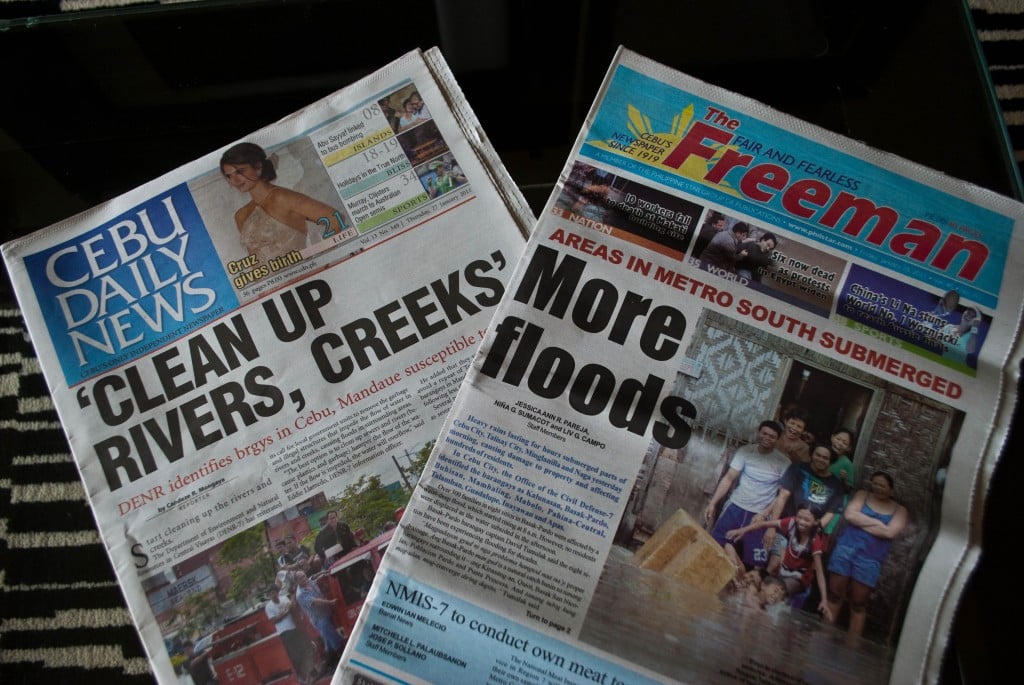 My stop in the Philippines got off to a slow start thanks to a 3-hour delay in Manila for my flight to the southern Philippine island of Cebu. When I finally landed in Cebu, it was almost 10pm and – I swear to God – raining sideways. Swell.

Luckily, my hotel – the Hilton Cebu – wasn’t far from the airport on Mactan Island. I made my way to the hotel and was checked in to a lovely spa suite. (Bonus points for Hilton – there was a bottle of wine waiting on the living room table.)

Though the suite was gorgeous, it was on a high floor on the corner of the building and the winds outside were so strong there was an impossibly loud whistling sound coming from the windows throughout the night, which made sleep a challenge.

After managing only a few hours of sleep, I awoke the next morning anxious to check out the view from my room since I’d arrived after dark. Unfortunately, the view wasn’t much since the storm was still raging outside making visibility difficult. I was hoping the storm would have passed during the night but it appeared it was here to stay. And after a quick online check of the forecast, it wasn’t looking good for the rest of my stay either.

Still, I was determined not to let a little rain ruin my long-anticipated trip to the Philippines. My original plan for today had been to take the hi-speed ferry to the nearby island of Bohol and take in some of the sights on that island. I showered, grabbed some breakfast and decided to press on with my plans, weather be damned!

When I got down to the lobby and spoke with the concierge about my plans for the day and asked how I could get a taxi to the ferry terminal, his poorly-disguised look of unease was enough to make me second guess my decision.

The first issue was the taxi. Since the ferry terminal was on the main island of Cebu and the hotel was on tiny Mactan Island, it was at least a 45-minute drive. Not a huge deal except that several of the islands’ narrow roads were reported to be flooded out and it could take hours to get a taxi, if one could make it to the hotel at all.

The next issue was the ferry. The concierge called to see if the ferry was even running; it was, but there was no guarantee it would continue to run all day – meaning there was a chance I could get stuck on Bohol Island.

With the tourist Gods obviously conspiring against me, I gave up and accepted that I’d have to spend the day at the hotel. Maybe it would be a good day to catch up on sleep and I could get out and see something tomorrow.

I walked around the hotel and took a few pictures of the deserted beach and pool area and during a brief break in the rain, I noticed there were two people heading into the water to do some snorkeling. Now, why didn’t I think of that?

I mean, if you’re going to get drenched on land, why not just get underwater? I hadn’t seen any lightning and the hotel had no problem renting me snorkel gear so I headed back to my room to change, excited that I had found some way to salvage my day.

It was also the perfect opportunity to practice a little more with my new underwater camera gear. The hotel’s beach had a protected coral area for snorkeling so I grabbed my camera and took to the water. The snorkeling was fun but not as great as it should have been since days of rain had clouded the water quite a bit.

But it was an interesting way to pass an hour or two and at least it made me feel like I was seeing something of the Philippines. I went to bed that night hopeful that the weather would improve for my final day.

No such luck. If possible, the weather was even worse the next day. The hotel offers daily bus service into town to the major shopping mall in Cebu City and since it was still going on schedule at 10am, I decided to go for it.

I was tired of being cooped up on the hotel at this point so I figured shopping was better than nothing. I’d see if I could hire a taxi to take me around the city a little on the way back to the hotel later.

Cebu’s mega-mall, the Ayala Center was a decent way to spend a rainy day and I did manage to finally get the battery changed in my watch (something that’s been on my to-do list for weeks). Other than that, I didn’t especially feel like shopping so I found a cab and enthusiastically explained my plan for touring the city on the way back to the Hilton.

The driver didn’t seem so keen on driving out to Mactan Island but I convinced him that I’d seen the roads on the way out and they looked fine (well, if not fine, certainly passable – I left that part out).

After agreeing on a fare for the trip, we made our way through the water-logged, traffic-laden streets to the first stop on my list, the Basilica Minore del Santo Nino. The basilica houses Cebu’s most important Christian relic, a small statue of the infant Jesus given by Magellan in 1521. There was a mass going on while I was there so I couldn’t see as much of the interior as I wanted but at least I was out seeing something!

Next stop was Magellan’s Cross, a replica of one planted here by Magellan when the very first Filipinos were baptized. When Magellan first arrived in Cebu in 1521, a new chapter in Philippine history began. The local chief was surprisingly receptive to Magellan, even agreeing to a baptism that was the first stroke of Christianity in the region.

Those were the main two things I wanted to see in Cebu City but my driver – finally on board with the whole tour-guide thing – insisted on taking me by a monument that displayed the history of the founding of the city. Since we’d already agreed on a price, I was game. After that, we made the long, slow drive back to the hotel.

Sadly, I had to fly out that evening so I never did get to experience the Philippines like I wanted to. The areas of Cebu and Mactan Island are world-famous for their beaches, diving and snorkeling and I only got a little taste of that.

It was disappointing to have never seen even a glimpse of the sun in three days. But I guess that just means I’ll have to come back and give the Philippines another chance someday.

I do have to say that all of the people I met there were wonderful and cheerful, despite the weather conditions. I was always greeted with a smile by everyone I passed on the street. With luck, I’ll get the chance to return and see more of their beautiful country.

But for now, it’s on to Palau!