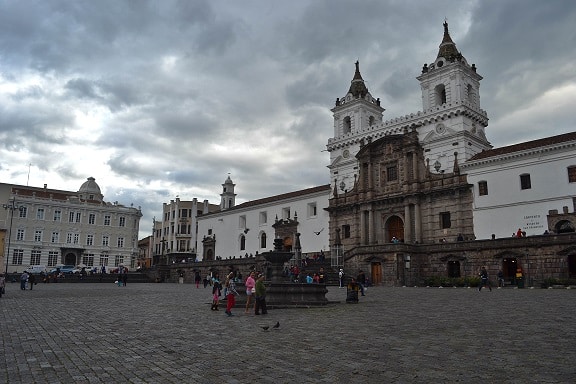 The next morning we struck out early determined to save a little money by making use of Quito’s public bus system for the day. First on our list, a trip about 45 minutes outside of town to visit the spot known as the middle of the world. You see, the small town of Mitad del Mundo quite literally straddles the line joining the Northern and Southern Hemispheres…better known as the Equator.

Mitad del Mundo – A Visit to the Equator

After a bit of a learning curve with the bus system, we finally arrived at the gates of Mitad del Mundo. The city has lots of souvenir shops and cafes and surrounds the official monument of the Equator which houses an Ethnic Museum and a lookout tower with sweeping views of the landscape. The yellow line of the Equator is visible throughout the town marking the official point of Latitude 0°-0°-0°.

We climbed to the top of the tower, shopped for Equator souvenirs, got our Equator passport stamps and took pictures standing with one foot on either side of the line…the usual Equator shtick.

Just outside the gates of Mitad del Mundo, we then visited the Inti-Nan Solar Museum which allows visitors to participate in several scientific experiments only possible at Latitude 0°. Our guide demonstrated how water drains swirling in different directions depending on which side of the Equator you’re on. You can try to balance an egg on a nail and experience the loss of balance as you try to walk the Equator line.

Some of it was interesting – like a Solar Clock that works only on the Equator – but most of it seemed to be more kitsch than anything. We ducked out of our tour a little early to catch the crowded bus back to town.

Our next stop was Quito’s TeleferiQo – cable cars that go up the slopes of the active Pichincha Volcano. We got off the bus at what looked like a close stop to the entrance but it turned out to be a mile or so walk uphill (at altitude) that had us both gasping for breath.

As if Quito’s 9,300+ft altitude isn’t high enough, the TeleferiQo whisks you up to 13,287ft (the highest I’ve ever been) in just 8 minutes. Needless to say, it’s freezing up there! And since neither of us was particularly dressed for that, we didn’t stay long. But the view was absolutely spectacular. After taking the cable car back down and walking the mile or so back down the hill to the main bus line, we headed to our final stop for the day, Quito’s Old Town.

The historical center of Quito was the first city ever to be designated by UNESCO as a World Heritage Site in 1978. We started at the Plaza de la Independencia (Independence Square) which is home to the Government Palace and a beautiful Cathedral and then wandered over to San Francisco Plaza. The San Francisco Church in this plaza is the oldest in Quito and was completed in 1580 giving the town its proper name, San Francisco de Quito. At 8,670 acres, it is also the largest religious complex in the Americas.

After wandering the Old Town for a few hours and stopping for a bite to eat, it was time to make our way back to the hotel and head to the airport for our redeye. Quito Ecuador was amazing and I wish we’d had more time to explore it, but sadly, it’s time to bring this trip to an end. Has it really been a month already?