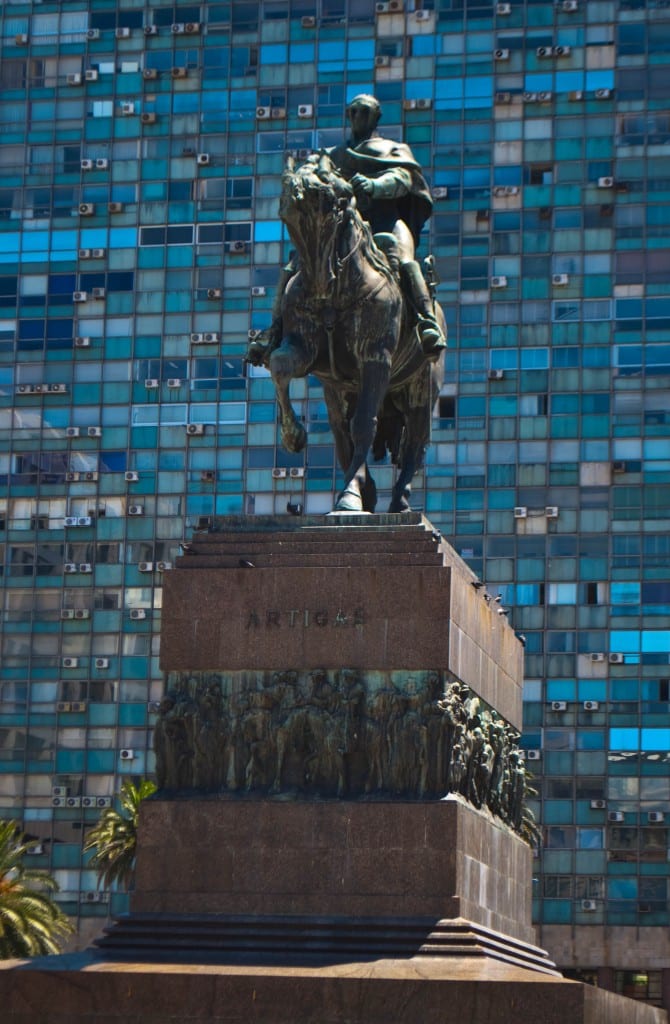 I almost didn’t make it to Uruguay thanks to a missed 3am wake-up call at the Sheraton in Vina del Mar.

With over an hour drive to the airport in Santiago and a 7am flight, I figured I’d better set a hotel wake-up call in addition to my cell phone. It was lucky I did set the phone because it’s what eventually brought me back to consciousness after I apparently hit the snooze 4 or 5 times.

When I realized what time it was (almost 4am) I packed hastily and practically ran to the car yelling something constructive to the front desk clerk about their wake-up call skills needing some work as I blew past.

Since I was flying LAN Chile to Montevideo, I knew I needed to be checked in 90 minutes before my international flight which meant getting to the airport and returning my rental car in a little over an hour. So, I drove way faster than I should have through the Chilean countryside and managed to make it to the airport by 5:25am.

Unfortunately, there was no time to refuel the rental car, so I’m sure I’ll have to take out a second mortgage to pay for those charges when I get home.

But thankfully, I made it! It was the only flight of the day on LAN to Montevideo so, had I missed it, my one night in Uruguay would have turned into an extra night in Chile.

When I landed in Uruguay’s capital of Montevideo a few hours later, I realized I hadn’t taken the time to research the best way to get from the airport to the city.

Fortunately, the very modern Montevideo airport had free wifi, so I pulled out my handy new iPad and did a quick search of my options. A taxi would cost around $30 US to my hotel, or there was a city bus that would stop pretty close for $1.50 US – that’s a no-brainer. I found the airport bus stop and made my way into the city.

The tiny (by South American standards) nation of Uruguay is wedged between neighboring giants Argentina and Brazil. The southernmost capital on the American continent, Montevideo, is home to just under 2 million people and is surrounded by miles of coastal seafront.

It’s known as the city with the highest quality of life in South America and (according to a magazine in my room) is among the 30 safest cities in the world.

My hotel, the Four Points Sheraton, was right in the middle of the city in a terrific location. When I arrived at the front desk, I quickly learned a very important lesson about the power of social media.

You see, when I arrived at the airport in Santiago earlier that morning, I had tweeted about my missed wake-up call (purposely and specifically naming the hotel) & the possibility of missing my flight while waiting in the passport control line. As I later boarded my flight, I again tweeted that I had made the flight after all.

By the time I landed, I had a direct message back from Starwood on Twitter with an apology about the missed wake-up call and a promise to speak to the hotel manager when he arrived that day. I was impressed with the quick response but didn’t think much would come from it.

Imagine my surprise when I presented my passport at the front desk in Montevideo and the desk agent, Alvaro, was already aware of my “incident” in Chile that morning and to help make up for the trouble, he had upgraded me to a suite and was comping my breakfast the next morning.

Now, I do tend to expect upgrades with Starwood but the breakfast was a nice touch since that was not included with my rate. Most importantly, though, I was impressed that someone with Starwood had actually taken the time to notice that I had another reservation at one of their properties in another country that night and call ahead on my behalf.

Nice example of customer service from Starwood and just one more reason why it’s my absolute favorite hotel company. But I digress…

After settling into my suite and finally taking my first shower of the day, I grabbed a street map from the front desk and headed out into the city to explore. Just two blocks from the hotel, I reached Avenida 18 de Julio, Montevideo’s main shopping street. Its name is derived from the date in 1830 when Uruguay’s constitution was first sworn in making it an independent country at last.

Following Avenida 18 de Julio for a while, I first came upon Montevideo’s “Locks Fountain” where couples in love carve their initials into a lock and secure it to the fence surrounding the fountain, thereby securing their love forever. How romantic! I took a quick look around for a prospective “lock” candidate, but no dice.  Moving on!

My next stop was the famous Plaza Independencia, which marks the dividing line between Montevideo’s City Centre and its Old Town and is considered the most important open space in all of Uruguay. In the center of the square sits the bronze equestrian monument of General Jose Gervasio Artigas, the hero of Uruguayan independence. His ashes rest in an urn under the monument. The plaza was designed in 1837 and features four fountains and 33 palm trees.

The most prominent building in Plaza Independencia is the Salvo Palace. When it first opened in 1928, it was both the tallest building in South America and the largest in the world made from reinforced concrete. Designed by Italian architect Mario Palanti, it is similar in style to another of his famous projects, the Barolo Palace in Buenos Aires.

My tour continued through the cobblestone streets of the charming Old City and eventually down to the Port Market. It was a gorgeous sunny day so I later wandered over to the waterfront and sat for a while watching the kids play and enjoying the pace of life in Montevideo. What a gorgeous city.

Tiring from my endless walking around the city, I decided to head back to the Four Points to indulge in the hotel’s whirlpool and sauna on the top floor and watch the sunset. Not a bad way to end the day!

Though it was a short stay in Uruguay, I thoroughly enjoyed my visit to Montevideo. It’s a charming city and one that I’d definitely visit again…though next time I’ll add a few more days to hit the playground of South America’s rich and famous – Punta del Este.