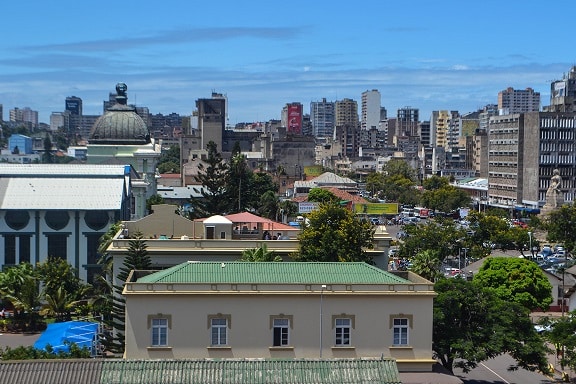 For my second cruise with MSC in as many weeks, I am headed up the eastern coast of South Africa bound for Mozambique.

Like Namibia, Mozambique is a country that I hoped to visit while exploring southern Africa. But the logistics of getting there and deciding where to stay were complex.

So when I discover that MSC has several cruise itineraries from Durban that visit Mozambique, it’s a no-brainer. I originally planned to do a cruise that included both Madagascar and Mozambique. Unfortunately, I just couldn’t work out the dates for that sailing with the rest of my complicated itinerary.

So, I settle for the MSC Opera’s sailing that calls at the capital city of Maputo and makes a second stop on the uninhabited sands of Portuguese Island.

The history of Mozambique

For nearly 200 years after Vasco da Gama landed at Mozambique Island en route to India in 1498, the Portuguese ran trading posts along the coast of what they called Portuguese East Africa.

In the centuries that followed, the gold trade turned to the ivory trade. But by the end of the 18th century, both had been replaced by the slave trade.

Nearly a million Africans were sold into slavery through Mozambique’s ports making it a major center of the African slave trade.

The early 20th century brought change to Mozambique through closer economic ties with South Africa and emerging independence from Portugal’s colonial empire. After decades of struggle and increasing international criticism, the Portuguese relented and the People’s Republic of Mozambique was proclaimed on June 25th, 1975.

Today, Mozambique has been remarkably successful in moving beyond its history of military conflict into peaceful political competition. In the past decade the country has won acclaim as an example of post-war reconciliation and democracy-building in Africa.

I am excited to visit Mozambique. But I’m equally excited to get out of Durban which I’ve found mostly uninspiring so far. Aside from my brilliant trip out to Lesotho yesterday, of course.

Read More: Lesotho & the Sani Pass: A 4-Wheel-Drive Adventure to the Kingdom in the Sky

When I board the MSC Opera – my home for the next four nights – I am delighted to see that it’s exactly the same layout as the Sinfonia (my ship last week to Namibia). I immediately know where everything is.

I again enjoy the luxury of unpacking my suitcase for a few nights. And within an hour of embarkation, I’m feeling right at home on the Opera.

As we sail out of port, the sun breaks through the clouds over Durban for the first time since my arrival. Remarkably, the city’s beach-lined coast actually looks like a place I might want to explore further when I return in a few days.

First Landing in Mozambique, the Capital of Maputo

The next morning I awake to the palm-fringed coastline of Mozambique gliding past my balcony doors.

By the time we dock in the capital city of Maputo, I am just finishing up breakfast and ready to head ashore.

My plan for the day is to do the ship-organized city tour excursion.

While I normally abhor “city tour-type” excursions (and generally all group tours), this tour seems like the best way to learn a little about Mozambique and its history. And honestly, there really isn’t anything in particular that I want to do in Maputo. So the city tour is the best way to see a little bit of everything.

Those participating in the morning city tour are instructed to meet in the theater at 9:30am. When I arrive, a superbly-organized excursion team quickly checks everyone in and provides instructions. In no time we are divided up into smaller groups and climbing into a mini-bus to start our tour.

I’m again impressed with the group size of MSC’s organized shore excursions. I’ve always thought ship excursions were large groups. But even though there are a large number of people booked for today’s city tour, I like that they split us into smaller groups of just a dozen or so.

It makes the whole experience feel a little more personal and less like a traditional group tour.

Our first stop is Maputo’s landmark train station which I remember well as the set for the movie “Blood Diamond” with Leonardo Di Caprio (I loved that movie).

The station’s dome was designed by an associate of Gustav Eiffel (of Eiffel Tower fame) and the historic building is one of Maputo’s most remarkable sights.

We take a walk through the deserted station (trains leave only very early in the morning) and get a look inside an empty, neglected local train that is sitting on a track. Note to self: Never to travel by train in Mozambique.

From there we visit the St. Sebastian Fort and Independence Square before stopping at the Museum of Natural History.

The museum showcases Mozambique’s cultural heritage but is perhaps most famous for its fascinating elephant embryo display.

Our last stop of the day is the FEMIO curio market for a little shopping.

It was actually a lovely tour and based on what I saw as we drove around Maputo, it was the perfect way to spend a few hours in the city.

By 1:00pm I am back on the ship with an afternoon ahead to relax.

Our next destination, and where we will anchor for the night, is just a short distance east of the city of Maputo.

The two islands known as Inhaca and Portuguese are separated by just one nautical mile. Their history dates back to the Arab trading days of the 14th century.

Inhaca is the larger of the two at 7 miles long and 4 miles wide while tiny Portuguese Island is just over 1 mile square.

Once used by the Portuguese as their trading headquarters for ivory, the smaller island became known as the “Island of the Portuguese” and played a major role in the decimation of elephants in Africa.

Today, Portuguese Island is uninhabited and home to a nature reserve dense with vegetation. MSC has an agreement with the Mozambican government to use the island for shore excursions during the summer season.

Since there are no docks large enough for the Opera, smaller tender boats (zodiacs) are used to transfer guests to the islands and back.

Unfortunately, because of the small size of the tenders, going ashore is always dependent on weather conditions. Based on the forecast when we drop anchor in the Bay of Maputo it’s looking like our odds are about 50/50 for tomorrow.

But if there is one thing I learned last year in Antarctica (where I spent multiple days getting in and out of zodiacs) you don’t take chances with zodiacs and bad weather.

An Unexpected Day at Sea

Unfortunately, when I awake the next morning at 6am, it’s already pretty obvious. The best view I will get of the islands today is the one I’m currently enjoying from my cabin.

I can hear the wind rattling my balcony doors, the sky is gray and the sea swells are ominous.

But the weather can change quickly and there has been no announcement of cancelation yet. So, I get ready, grab some breakfast and report to the Caruso Lounge on Deck 7 at 7:30am (the meeting time for the first tender) as instructed.

For our stop on the islands, I booked the “Fast Pass to Inhaca Island” from the excursion desk.

It’s not a tour exactly, just an opportunity to skip the long tender line and take the boat straight to Inhaca Island. I figure this will give me some time to explore both islands (a regular shuttle runs between the two islands every 15 minutes) before they get too crowded.

We wait for 45 minutes or so before the announcement is made that our landing plan has been scrapped due to weather conditions. Drat.

On the plus side, I’ll have an extra day to enjoy the facilities of the Opera. It’s a shame since I was so looking forward to a relaxing day on the islands. And finally getting my toes in the ocean on this trip (though there will be plenty of time for that over the next few weeks).

I’ve also been hearing for days what a great job MSC does creating a terrific experience on shore for passengers. They provide bars, lunch and shaded tents on an island with no built-in facilities.

It would have been a great day, I’m sure, but what can you do? The Opera’s crew can control a lot of things but unfortunately the weather isn’t one of them.

Luckily, the weather does clear up enough to make for an enjoyable day by the pool so that’s exactly where I spend it.

As we sail our way back to Durban, I once again decide to make use of my last day at sea by visiting the Aurea Spa.

This time I opt for both a massage and a facial and they are both excellent. I could really get used to these relaxing days at sea. It’s such a civilized way to travel versus going through security at an airport.

There’s definitely a good case to be made for cruises as transportation.

Arrival Back in Durban

Early the next morning we arrive back in Durban. I’m a little sad to think the cruising portion of Round the World #9 has come to an end.

This is the first time I’ve included more than one cruise itinerary into one of my trips but it definitely won’t be the last.

In three sailings now with MSC I’m very impressed with both the quality of their ships and the unique itineraries they create. Destinations I couldn’t have reached with any other cruise line.

Big thanks to MSC and the crews onboard the Sinfonia and the Opera for making both cruises so spectacular. I’m quite certain I’ll be sailing with MSC again before long.

But for now, it’s back to Durban for one more night before moving on to my last stop on the African continent…Malawi!

Disclosure: Like the Namibia sailing, I did pay the full advertised rate for this popular cruise. However, the following were graciously provided courtesy of MSC Cruises: Maputo City Tour Excursion, Aurea Spa services and internet access.