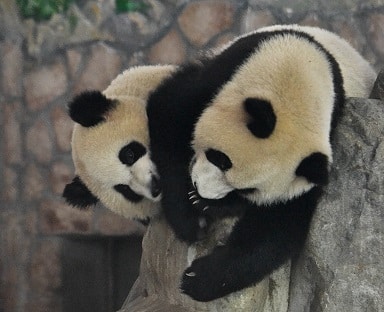 Chengdu was not a planned stop on our original Asia itinerary.

But when the entry permits for Tibet fell through last week, we had to make some last-minute adjustments to the schedule. Changing our flights to skip Lhasa, Tibet and go directly from Beijing to Kathmandu, Nepal meant an overnight layover in Chengdu.

As a couple of experienced travelers accustomed to rolling with the punches, we decided to embrace our new stopover and make the best of it. I found a lovely new hotel to check out (the Sheraton Chengdu Lido) and Shannon dove into research on what there was to see and do in Chengdu.

We didn’t have much time there, just half a day, but thorough research revealed that there was one adorable attraction not to be missed – the Chengdu Research Base of Giant Panda Breeding.

Just a 30-minute drive outside the city, the Panda research base is a 250-acre refuge for giant pandas and red pandas whose natural habitat in remote bamboo forests in the high mountains is gradually being destroyed.

It houses the first giant panda museum in the world, a panda hospital, several panda nurseries and a panda kitchen (fear not, no actual pandas are cooked or participate in the cooking).

But most importantly, it houses dozens of adorable giant pandas and red pandas lounging around and doing adorably-panda-like things like crunching on bamboo rods and awkwardly-lumbering up trees. Shockingly, I’d never actually seen a panda, despite the fact that my own hometown zoo (Zoo Atlanta) is home to several of them. It would appear I don’t get out enough at home.

We arrived in Chengdu a little after noon and after checking into the Sheraton, quickly beat a path to the research base.

We’d read that the morning hours were the best time to visit since the pandas are most active then but with our late arrival, we’d have to settle for an afternoon visit.

Unfortunately, due to the afternoon heat, all of the giant pandas had been moved into the air-conditioned comfort of their indoor enclosures by the time we arrived. Lucky pandas.

We wandered from enclosure to enclosure (sweating, I might add) watching them laze around in the A/C, snack on bamboo, swat each other playfully in the head and gingerly climb up the occasional sturdily-constructed indoor pseudo-tree.

We even saw one panda play with a giant disc-shaped ice cube that he seemed to particularly enjoy. Pandas are just cute, there’s no getting around it. And these pandas were definitely living large.

Then we hit upon a bit of luck. Unlike the giant pandas, the red pandas (perhaps considered the red-headed stepchildren of the panda world?) were still outside!

I have no idea why the black-and-white giant pandas were treated to climate control while the red pandas sweltered in the heat, theatrically collapsed on tree branches with their tongues hanging out and slurped from their water bowls as if they’d just crossed the Sahara on camel back.

But I’ve no doubt the vets at the panda research base know what they’re doing. I’m just not entirely sure the red pandas are on board. Regardless, it made for some terrific photo ops! Conveniently, red pandas are also super cute.

After a couple of hours of panda viewing, we headed back to the hotel for dinner and called it a night. Chengdu actually looked like a really fun city, I wish we’d had more time to explore it. But again, it’s time to move on. This time, we’re headed out of China and on to Nepal…next stop, Kathmandu!