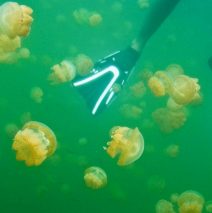 After days of rain in the Philippines, when I landed in Palau at 2:00am the most positive thing I can say about the weather is that it was not raining sideways. It was, however, raining in a circular motion reminiscent of something I may have seen on the Discovery Channel. Seriously, I have video. Come on Palau, you cannot be serious.

The good news was that at least a driver from my hotel, the Palau Royal Resort, was waiting to greet me – a welcome relief at this ridiculous hour. By the time I got to the hotel and settled into my lovely room it was after 3am. I had scheduled a full day outing with Sam’s Tours (the primary diving outfit on the island) for a tour of the Rock Islands and Jellyfish Lake but with the weather I wasn’t sure we’d even still be going.

After managing 2 or 3 hours of sleep, I awoke to slightly better weather outside and sure enough, someone from Sam’s was at the hotel to pick me up at 8am. When I arrived at the marina, I was introduced to my guide, Malahi, and the couple from France who would make up the rest of our small group.

We climbed into our boat and headed out for a day on the water.

Underwater in the Philippines 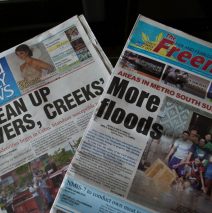 My stop in the Philippines got off to a slow start thanks to a 3 hour delay in Manila for my flight to the southern Philippine island of Cebu. When I finally landed in Cebu, it was almost 10pm and – I swear to God – raining sideways. Swell.

Luckily, my hotel – the Hilton Cebu – wasn’t far from the airport on Mactan Island. I made my way to the hotel and was checked in to a lovely spa suite. (Bonus points for Hilton – there was a bottle of wine waiting on the living room table.) Though the suite was gorgeous, it was on a high floor on the corner of the building and the winds outside were so strong there was an impossibly loud whistling sound coming from the windows throughout the night which made sleep a challenge. 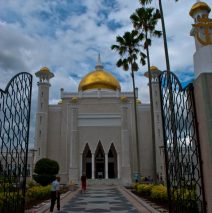 Since I was flying Royal Air Brunei from Borneo to the Philippines, I got a bonus stopover in Brunei I didn’t have much time in Brunei (just a 5 hour layover) but as it turned out, I didn’t need it. This tiny sultanate makes up less than 1% of Borneo’s landmass. In fact, if it weren’t for the discovery of oil in 1929, which turned the tiny state into an economic power overnight, it was destined to be swallowed up by neighboring Malaysia.

Formerly a British protectorate, Brunei has been completely independent since 1984.  In the years since, the nation has veered toward Islamic fundamentalism adopting a national ideology known as Melayu Islam Beraja (MIB). In 1991, alcohol was banned and stricter dress codes were introduced. Brunei is ruled by Sultan Hassanal Bolkiah, son of Sultan Omar Saifuddien who was instrumental in the country’s independence.

I really only had two things on my layover agenda in Brunei’s capital of Bandar Seri Begawan:  1) visit the water villages and 2) see the Omar Ali Saifuddien Mosque. So, after clearing immigration, I headed out to the taxi queue in search of my driver for the day. After finding one and agreeing on a price, we headed toward town. 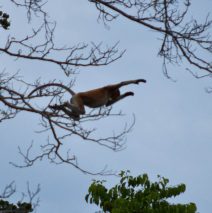 Planning a trip around the world is harder than you’d think. Dozens of flights, hotels, car rentals, trains, buses – a myriad of details to be booked (and it helps if you book them for the right dates). I’m often asked, “Do you ever make mistakes in your planning?” Well, folks, the answer is yes. And my flight to Borneo was a prime example.

There were no direct options for getting from Bangkok to Kota Kinabalu but there were a number of cheap options with connections. After researching the options, I decided to fly Air Asia from Bangkok to Kuala Lumpur and then Malaysia Airlines on to Kota Kinabalu. All was going according to plan until I landed in Kuala Lumpur and began looking for the Malaysia Air gates for my connection.

Turns out…Kuala Lumpur has TWO airports. I flew into LCCT (which serves primarily Air Asia) and needed to fly OUT of KLIA. Now, usually I’m really good about checking to make sure connecting flights on various airlines are going into/out of the same airports, especially when dealing with discount airlines that often fly out of smaller airports. I mean, I’m well aware that most major cities have more than one airport  and I swear I always double-check airport codes. Somehow this one got by me. 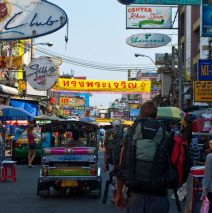 I arrived in Bangkok with an agenda. One of my favorite cities in the world, it is also a great place to get a few things done when you’ve been in remote places for a while. Luxury hotels, hi-speed internet (oh, how I’ve missed you!) and great food – all with unbeatable prices. I’ve written about my love for Bangkok each year, so this time I decided to change things up a bit and focus on one of the city’s most fascinating streets.

Shockingly, the first two times I visited Bangkok, I was so busy exploring the Grand Palace, the temples and the markets that I never even made it to Khao San Road. By my 3rd trip, I was determined to check it out and when I did, it quickly became a must for me on every trip to Bangkok. For the past two weeks of my trip, I’ve been adding to my list of things I need to do while on Khao San this time. 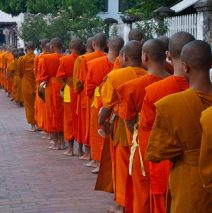 Have you ever arrived in a faraway place and known instantly that you were always meant to go there?

I had that feeling when I first stepped off the plane in Luang Prabang, Laos. I’m not sure how to explain it, really. It was somewhat surreal, more a sense of immediate familiarity and belonging. Perhaps that I’d been here before – though I definitely hadn’t. After catching a glimpse of the tiny town from the air, I couldn’t wait to start exploring.

Until 1989, Laos was closed to tourism leaving it virtually cut off from the rest of Southeast Asia. Since opening their doors to the world slightly over two decades ago, Laos now has a steadily-developing economy, reliant on tourism and regional trade.

Situated in northern Laos, Luang Prabang is one of the richest and most visited provinces. It was designated a UNESCO World Heritage Site in 1995 meaning a blessed ban on buses and trucks. Most road traffic consists of bicycles, motorbikes, tuk-tuks and those traveling on foot. Considered by many travelers and writers to be the heart of Laotian culture, the small and gentle town on the banks of the Mekong River is encircled by mountains and sits at 2,300ft above sea level keeping its climate relatively mild.