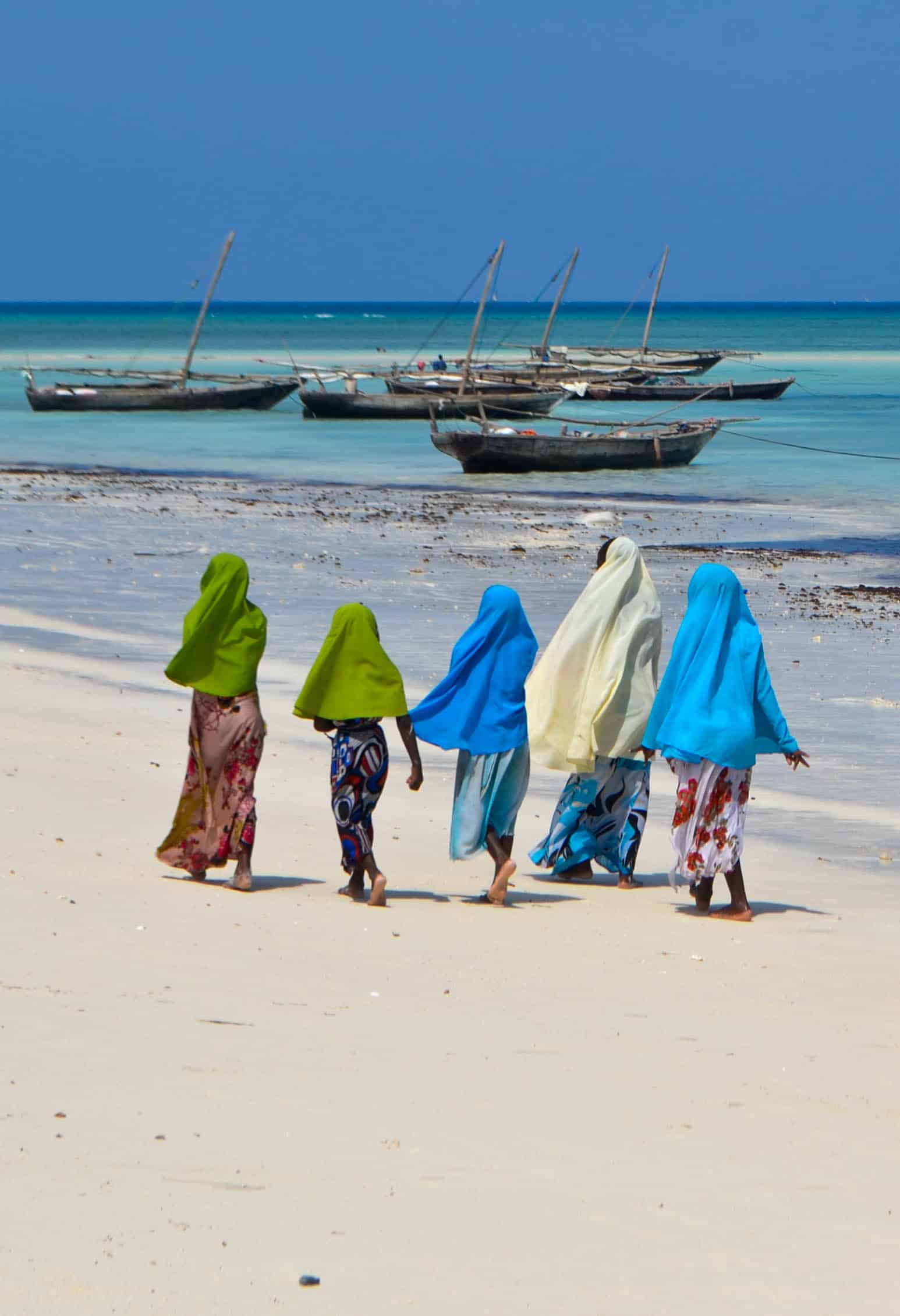 After a lengthy (8-hour) layover in Lusaka after Victoria Falls and a sleepless night on the way to Nairobi, I landed at 6:00am with two hours to kill in the Nairobi airport before my 8:00am connection to Zanzibar.

And thank goodness for the Kenya Airways Simba Lounge or I might have been reduced to finding a square of floor space somewhere. Even at 6:00am, the Nairobi airport was a hive of activity.

Though booked through Kenya Airways (a Skyteam member), my flight to Zanzibar was operated by Precision Airways. We boarded the small prop plane right on time and I grabbed a window seat hoping to get a glimpse of Zanzibar on approach.

Little did I know our pilot had plans to start the show long before our arrival in Zanzibar.

The Flyby of a Lifetime

As we flew over mainland Tanzania on our way to the coast, our pilot announced that he would be making an intentional flyby of Mount Kilimanjaro, Africa’s tallest peak, which would be visible out the right side of the aircraft in about 5 minutes.

And for once, I was actually on the right side of the plane! I watched in awe as the mountain slowly came into view out my window. We literally passed within what seemed like inches (but was surely not) of the peak and it was such a strange sensation to look out my airplane window and see a mountain at eye level (which in this case was 19,000ft).

In most circumstances that would be alarming, at best, but it was truly a once-in-a-lifetime treat to see such a famous peak up close and personal (most people work a lot harder to see the top of Kilimanjaro in all its glory, I just bought an airplane ticket). Now, if I can just get someone to fly me over Mt. Everest, I’ll be all set.

After the awe-inspiring in-flight show, the approach to Zanzibar was unimpressive due to a low cloud cover. I’d arranged for transportation to my hotel in advance through a local transfer company. My hotel, the beachfront Doubletree Resort Nungwi Beach, was located on the North shore of the island more than an hour from the airport.

I’d briefly considered renting a car for my 3-night stay but decided against it after reading online that the roads can be tricky and there are police checkpoints every few miles.

Once I was in the car and on my way to the hotel, I was immediately glad I’d decided against the rental car. Not only was the traffic chaotic, the police checkpoints seemed to be quite a serious ordeal involving a comparison of vehicle registration and permit numbers at each of many stops.

My driver, Salum, said it was kind of ridiculous that he drives these roads many times a day and still they stop him and check his vehicle registration every time. Most of the time, he said, they just want money. (Yep…definitely glad I’m not dealing with that!)

Aside from the police checkpoints, the hour-long drive out to the hotel was quite pleasant and as we drove Salum filled me in on some of the island’s rich history. A semi-autonomous part of Tanzania, the Zanzibar archipelago is actually made up of a number of islands, the largest of which are Unguja (commonly referred to as Zanzibar) and Pemba.

The capital of the islands is Zanzibar City (located on Unguja) and its historic city center is the UNESCO World Heritage Site of Stone Town which is claimed to be the only functioning ancient town in East Africa.

For most of its history, Zanzibar’s rule fell under the Sultanate of Oman. As part of the “Spice Islands,” it did a bustling business in the spice markets and was also a major hub for the East African slave trade. In the late 1800’s it became a British protectorate after the fallout of the slave trade.

Zanzibar briefly gained independence in 1963 before deciding to merge with nearby mainland Tanganyika to form the newly-named “Tanzania.” Due to its Arabic history, the local population is approximately 70% Muslim and 30% Christian.

The spice trade continues to be a main source of industry on the island, though tourism has overtaken it in more recent years. As we drove along the island’s main road, we passed village after village full of smiling locals and children returning from school in their blue and white uniforms. Because of a lack of school buildings, the younger children go in the morning and the older children in the afternoon.

We arrived at the Doubletree Resort just after noon and I was thrilled with the beautiful oceanfront room they had upgraded me to (especially since my Hilton status is only Gold these days).

The room had plush furnishings, hardwood floors, an overly-romantic (for just me) four-poster bed draped in billowing mosquito netting…not to mention a million-dollar view over the ocean.

The Doubletree is literally surrounded by Nungwi village, a traditional fishing village on the Northern tip of the island. When I first walked out to the beach, I was blown away by the scene in front of me.

Nungwi Beach has dramatic tide shifts and it was obviously low tide because dozens of wooden dhows (traditional fishing boats) leaned on their sides in the sand, beached by the tide. It looked like a fishing boat graveyard for what must have been a mile radius. I’d never seen anything like it.

But while the tide was out and the boats were in a forced “dry dock,” the women of Nungwi, dressed in multicolored wraps known as “gownis”, were still hard at work painstakingly canvassing the low tide areas with buckets in search of clams and squid.

It was absolutely fascinating to watch. I pulled up a lounge chair and that’s exactly what I did for the rest of the afternoon.

By 2:00pm, the tide started to come in and as hulls were lifted by the ocean one by one, the men climbed aboard their boats and headed out to sea. By 5:00pm, the tide was high and crashing against the hotel’s seawall. It was amazing to see the stark difference between high and low tide. And it was great for sleeping at night since the waves crashed right below my balcony!

What to do for 3 Days in Zanzibar?

Since I had three full days to spend Zanzibar, I had a rough plan in mind.

I wanted to spend one day doing absolutely nothing. I’d had a busy week traipsing all over Africa and I was tired. A day in a lounge chair with a good book was just what the doctor ordered.

I also wanted to see Stone Town, which was said to be a fascinating historical site. And I wanted to get out on the water and maybe do a snorkeling trip or see another beach or two. So I headed over to the tour desk in the lobby to investigate my options.

Since Stone Town was near the airport, it made sense to combine my trip there with my transfer to the airport on my last day since my flight wasn’t until 7:00pm. I decided to take the next day as my day of rest and book a snorkeling trip to Mnemba Atoll for the following day. It was pretty much the perfect plan.

I spent my day of rest sleeping in (which I hadn’t done at all on this trip yet) and then planted myself in a lounge chair for the afternoon. I alternated between reading and watching the fascinating people of Nungwi village go about their daily fishing activities.

There was a perfect sand bar just in front of the hotel that emerged every time the tide went out. I claimed it for my own. Later that afternoon I even took a walk through the village.

The next morning, feeling rested for the first time in weeks, I was really excited for my snorkeling trip. Unfortunately, when I got to the dive shop where it was supposed to depart, it had been canceled due to high seas. Darn it.

Apparently, I would have another day of rest whether I needed it or not. I spent the day with my camera in hand, walking the beach (and my sand bar) and getting a glimpse into the life of the Nungwi people.

The women were so beautifully dressed in bright, happy colors and they were always laughing and smiling. Everyone greeted me on the beach with an enthusiastic, “Jambo!” and it literally seemed like the happiest place in the world.

The History of Stone Town

By Day 3, I was feeling completely rested but also a bit restless. I was ready to get out and see more of the island. My car, driver and guide, Hemed, picked me up at 10:00am and off we went to explore Stone Town.

We began our tour at the Anglican Church which sits on the former site of heart of the slave trade, the auction site. Hemed walked me through the church and described how the slaves were brought there and the conditions in which they were kept. We then walked through the underground slave chambers and past the monument which stands today in honor of all the slaves who passed through here.

Ironically, it was again David Livingstone (this guy really got around) who played a large role in bringing the slave trade to an end. When he visited Zanzibar and saw the slaves being auctioned, his protests to the Queen ultimately resulted in the island being claimed as a British protectorate. Because of this, Livingstone is held in equally high esteem in Zanzibar as in Zambia.

Next, we headed into the bowels of the Stone Town Market, starting with the absolute smelliest, the fish market. This was definitely not a place for anyone with a weak stomach. Flies swarmed around every stand and the aroma was beyond nauseating. From there we moved on to the only slightly less nauseating beef area where butchers swung large cleavers and racks of still bleeding beef passed by me as I walked.

Thankfully, next we moved on to the more visitor-friendly and far less vomit-inducing spice and fruit section. This part was actually quite pleasant and we wandered the stalls for a while.

Our next stop was the former royal palace which is now a fascinating museum of Zanzibar’s history. After leaving the museum, we walked through the narrow, winding streets of the old town and along the shoreline to check out Stone Town’s beach area. After that, I took some time to do a little shopping and have some lunch before finally returning to the airport.

I really loved Zanzibar, especially the location of the Doubletree set within Nungwi village. It really made you feel like a part of the village. By the second day I recognized some of the women and men and if you stayed there much longer I imagine you’d get to know them all.

Everyone was so friendly and the women in their colorful gownis just made for a stunning scene on the brilliant white beaches and clear blue waters.

It’s the kind of place that feels tribal and yet luxurious at the same time. And it’s a place I absolutely hope to re-visit someday.

But for now, it’s time to make my way back to Nairobi and catch my flight to Bangkok tonight. Because, of course, it’s just not a RTW trip without a Thai massage (or five) in Bangkok!