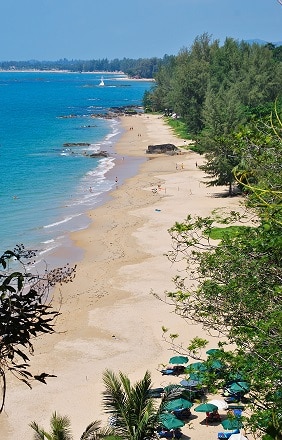 I decided to rent with National again, hoping for an upgrade from the cheapest available economy car I had reserved online. National did not disappoint and I was quite pleased with the little Honda Civic-like car they brought around for me at the airport. I spent a few minutes familiarizing myself with the car and examining it closely for any pre-existing damage.

Then, I called to mind the most important lesson I learned from driving on the wrong side of the road in Cape Town a while back – forget everything you currently know about driving and start from scratch.

The hardest part, for me, is not just being in what feels like the wrong lane, but sitting in what is most certainly the wrong side of the car. It takes me a bit to get the feel of where the car should be in the lane, it’s disorienting to be driving from what should be the passenger seat. The other thing that keeps screwing with my head is that the turn signals are on the opposite side of the steering wheel – I spend a solid amount of time signaling lane changes with my windshield wipers.

Other than that, I catch on pretty quickly and I’m thankful there isn’t too much traffic on the road.

Thirty minutes later, after a stunning display of navigational ability (reading the map while driving on the wrong side of the road), I arrive at my hotel for the night, the Angsana Laguna Phuket Resort. Ranked among the top 5 resorts in the Asia-Pacific region, the resort enjoys a pristine location between the Phuket Lagoon and a mile-long white sand beach. The resort seems to sit on its own little island.

Upon check-in, I am excited to learn that I have been upgraded to a “Lagoon Villa”. I’m not sure what this means exactly but I soon realize it entails getting in a boat with my luggage to reach the villa. Fun!

A Villa in Phuket

When I arrive at the villa with the front desk manager leading the way, I am overwhelmed. My “room” is actually more like a 2-story home sitting on stilts over the lagoon. It is amazing and, I would have to say, second only to the over-the-top suite I had in Dubai a few years back on Round-the-World #1.

After a little quality time spent getting acquainting with my new luxury accommodations, I reluctantly decide I should get out and explore the rest of the resort. The beach is a gorgeous wide stretch of white-sand and there are two baby elephants wandering the pool area looking to score bananas from unsuspecting tourists.

I had forgotten that when you see a fruit basket in your room at the beach in Thailand, those tiny bananas are not meant for you…they are elephant bait. So, I went back to my room to retrieve the bananas; after all, I did not want to be empty handed if a baby elephant came-a-calling.

Bananas in hand, I spent some time with a baby elephant named “Soo” who was quite a ham. She played the harmonica, danced to her own music, and gave hugs with her trunk to those with bananas or without. (They eat the bananas whole, by the way, no need to peel them.)

That evening, I watched the bright orange sun melt into the Andaman Sea from my dinner table on the beach with my feet in the sand. Sometimes, life just doesn’t get much better. Sigh.

The next day, it was time to make the drive up to Khao Lak. A thriving tourist destination for backpackers, up-scale tourists, adventure tourist and scuba enthusiasts, the 17-mile Khao Lak coastline was the Thai area hardest hit by the Asian tsunami of December, 2004.

Because Khao Lak is surrounded by mountains, when the waves came in more than a mile onshore, the town was literally crushed between walls of water and the surrounding mountains. The deal toll is unknown to this day but is estimated between 4,000 and 10,000. Included in the casualties from this area were the grandson of the King of Thailand and supermodel Petra Nemcova (who survived) and her fiancé.

Also, in Khao Lak that day was my friend Simon, from Amsterdam. When I heard from him days afterward, his e-mail told the harrowing story of being led up a nearby hill by hotel workers who had received warning phone calls from nearby provinces. He and his friends survived (though their hotel did not) and stuck around for more than a week afterward to help with the relief efforts.

But despite its tragic recent history, hardly any evidence remains of that day more than 4 years ago. All of the hotels were re-built within a year and are currently running at pre-tsunami capacities. The only noticeable reminder is the newly-erected Tsunami Museum in the town center.

My hotel, the Le Meridien Khao Lak, is relatively new and was under construction in 2004. Like almost every major Thai resort, it sits on a pristine stretch of beach and has all the amenities you could ever need. I was upgraded to a lovely suite but after my night in the lagoon villa, it didn’t seem quite as exciting.

Since the resort was only a 10-minute drive from town, I headed back in for a massage before enjoying another evening of sunset-watching on the beach.

After that, it was time for my work day to begin. I’ve gotten on a bit of an interesting schedule in the past few days. Since I need to be available to return e-mails and phone calls during US business hours, that means working though the night. Thailand is 12 hours ahead of US eastern time so from 8pm to 5am, I am mostly awake.

At my hotel in Khao Lak, I decide I am too cheap to spring for the in-room internet at $17/day and opt for the commute to the resort’s lobby where the wi-fi is free. Since I spent a good bit of both of my overnights in the lobby, I am certain the lone night-shift front desk guy thinks I am crazy.

At 5am, I head back to my room and sleep for a few hours before beginning my day of sightseeing. I’m not sure how long I can keep up this schedule but it seems to be working so far. After all, I can always nap at the beach during the day if need be.

For my last day, I drove around exploring the Khao Lak area a little further. I made a visit to the Tsunami Museum to make a donation and then contributed my last bit to the local economy with one final massage.

I’ve been in Thailand for 6 days now and I’m not ready to leave, but alas, tomorrow it’s time to move on to Malaysia – there are yet more beaches of the world to be conquered.