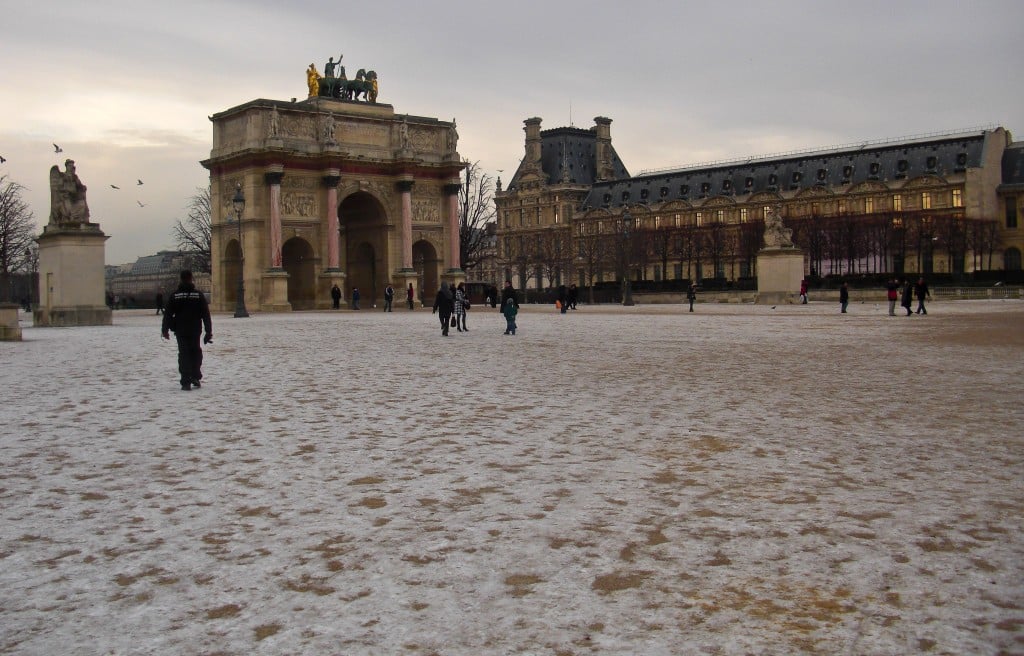 After getting home from the Atlanta airport last night with no bags, I decided to just pack a small duffle bag with enough clothes to carry me for a few days in Paris and Italy and the remainder of the warm-weather clothes I had set aside to replace what I brought to Costa Rica.

My plan was to change out the new for the old in my bag when I got it and then ship home the smaller duffle. That was my plan, I still didn’t know what Delta’s plan was.

My new camera’s charger is in my missing bag so I also packed my old camera and charger. Thank goodness the voltage in Costa Rica was the same as in the US and I did not pack my universal adapter for that leg of the trip.

That is crucial on these trips for charging my phone, laptop, camera and iPod. Other casualties of the missing bag: my house keys, my Honolulu marathon finisher shirt, a darling little pair of Manolo Blahnik sandals, and the suitcase itself – my favorite little travel-friendly Tumi bag.

Thank God Theresa has one of my house keys and keeps it at her house, I had to go by there and pick it up last night – and then return it this morning since she’s feeding Chloe while I’m gone. Everything else in the bag I guess I could survive without. Theresa, by the way, is still in Costa Rica trying to get on a flight home.

When I got to the airport in Atlanta this morning, I decided to give the baggage office another try to see if there was any update.  Nothing new but I was able to get Delta to agree to return both bags home to Atlanta (where they were supposed to go in the first place) on the first available flight once I’m able to recover them. Theresa can pick them up on the other end. That was huge since I was afraid we’d have to pay to ship at least Theresa’s home. (Obviously, I can’t carry it around for the next month.) Now, all we need to do is find them.

My bad luck continued when I boarded the plane to JFK for my connection to Paris only to find the seat listed on my boarding pass (1C) didn’t exist. Luckily, the gate agents were able to straighten it out in a few minutes and find me another seat. Then the waiting began. Our plane was carrying too much fuel because it was originally scheduled to fly to Athens. So, we had to wait at the gate for 90 minutes while they drained fuel.

I had a fairly tight connection in NYC for an international flight (a little under 2 hours). With the delay, I was really going to be pushing it. When we finally touched down at JFK, my next flight was already boarding.

I was connecting to an Air France flight and had to make a major terminal transfer involving a train and another pass through security. I was just sure I would never make it. As I breathlessly approached the security check-point after running off the train, I heard my name being paged in the airport to report to the gate for final boarding (as if I were just sitting around having a latte or something – I mean, really?!!).

When I explained to the TSA agent that I was the person being paged, he thankfully walked me to the front of the line. I ran to the gate at top speed and made it just as they were closing the door. Then we sat on the runway for almost 2 hours waiting to take off.

Honestly, I am beginning to think this trip is cursed. My first three RTW trips were all sunshine and roses when it came to travel delays – there were none.

Is it possible Murphy has finally caught up with me? I’m 0-4 with on-time departures so far. Not a single flight has arrived less than an hour late and have I mentioned that I am still without my suitcase? Yeah, I guess we’ve covered that.

My one day in Paris began very much like my last night in Atlanta; waiting aimlessly at a baggage carousel for bags that would never arrive.

One bag (we don’t know whose, was scheduled to be on the Atlanta-Paris flight that landed at 6:00am, within minutes of when my own flight landed. I found the baggage carousel for the Atlanta flight and waited expectantly to spot either of the our bags. An hour later when all bags were out, I went to the baggage office in despair to file the official claim.

The agent was convinced that the bag was scheduled to be on that flight and it must be held up in customs, or in a “special area” somewhere (this mysterious special area would come to haunt me). She was very helpful and was really trying to track it down so I wanted to stick around for awhile and give her some time.

It was far too early to check into my hotel anyway and I still hadn’t had time to upload pictures from Costa Rica so I figured I could kill some time here and get it done.

By then it was 8:30am and I really needed a shower and some breakfast so I headed over to Air France’s Arrivals Lounge. This is a nifty little lounge with lovely showers, good food and free internet that I have used numerous times upon arrival in Paris.

It was exactly the place I needed to kill a few hours. After a blissfully hot shower and a change of clothes, I felt almost human again. I hadn’t slept at all on the flight the night before but a little breakfast and some caffeine woke me right up.

Around 11am, with as much work as I could do completed, I decided to take a walk over to the Delta Customer Service counter and see if they could offer any additional info on the situation (it was Air France who filed the claim since they run the Skyteam baggage office in baggage claim). According to their system, it was definitely on the flight and they were convinced it was down in baggage claim somewhere. Later, after what turned out to be another pointless trip to the baggage office, someone managed to figure out that the bag was not on the flight after all. It was now scheduled to be on the same flight arriving tomorrow at 6am.

I felt a little better that there had at least been an update to my record meaning someone had physically seen the bag. There wasn’t much else I could do except return to the airport in the morning and try this all over again. So I caught the next train into town around 1pm and tried to enjoy the rest of my day in Paris.

A Snowy Day in Paris

I spent the rest of the afternoon walking around Paris and taking photographs of all the usual sights with snow on the ground. I’ve never seen snow here in Paris so these are all new photos for me. As you’ll see, I think they turned out pretty well.

When the sun set, I decided it was time to make the best of the luggage situation and start spending the 100 euro (about $130) allowance that I would be reimbursed for to purchase new clothes. I don’t really need anything (unless of course the bag never shows up and then I have a real problem) but it made me feel better to spend Delta’s money and get a little something for all my trouble.

Back to the airport in a few hours for my flight to Naples, Italy and to meet that 6am flight. Fingers crossed I will see a familiar bag on the carousel tomorrow morning!