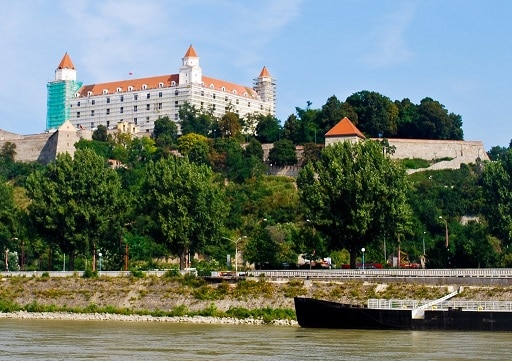 After a delightful stay in Austria, we got up early this morning for our Danube cruise to Bratislava Slovakia (called the “Twin City” of Vienna). I’d decided to visit Bratislava on the way to Budapest because I’d heard good things about the city’s historic castle and quaint Old Town area and it was an easy stopover between Austria and Hungary.

From Vienna, you can take the train or the hydrofoil to Budapest – each makes a stop in Bratislava. We chose the cruise for the first hop (it was more expensive than the train) and then the train for the longer distance on to Budapest.

The cruise was a terrific way to see the Danube and very scenic the entire way. The hydrofoil boats do go at warp speed so it’s a little uncomfortable to pass the time on the deck with all of the wind. We spent some time on the deck but most of the 90 minutes in the comfort of the glass-enclosed main cabin.

When we arrived in Bratislava at 9:45am, we hadn’t decided how long we were going to stay. We had two train options onward to Budapest, 11:50am and 3:50pm. Something right in the middle of those two times would have been better for us, but you work with what you’ve got.

The first thing we wanted to see was the Bratislava Castle. As you might suspect, getting up to the castle involved not only hills and cobblestone streets…but also stairs. Fun!

After trudging up the steep cobblestone streets for a bit, we decided we’d take turns sitting with the luggage while each of us hiked up to the top to check out the view. This was a much better plan.

After our castle visit, we were just happy to be going downhill for a while.

Next stop was Bratislava’s famed Old Town. We wandered along the mazelike alleys for a while before deciding to try to make the early train to Budapest. Though we really liked Bratislava, we were excited to get to Budapest.

So, after a few navigational challenges ending in an eventual taxi ride to the train station, we were on our way to Hungary.