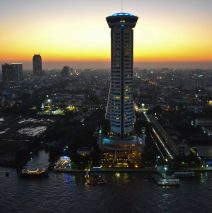 Ahh….Bangkok. My home away from home on these RTW trips and the only place I’ve visited on all 7 trips. Why? Because it was love at first sight on RTW #1 and – truth be told – I fall more in love with Bangkok every time I visit. From gleaming temples to exotic markets. The chaos of hot pink taxis dodging rainbow-colored tuk-tuks to the electric hum of the backpacker ground zero of Khao San Road. A winding river lined with 5-star hotels next to ramshackle fishing huts and aromatic street food beckoning from seemingly every corner. Blend them all together and you’ve got one of the greatest cities in the world. 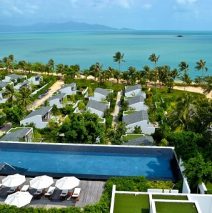 After an overnighter from Sri Lanka and a quick change of planes in Bangkok, Susan and I landed on the lovely Thai isle of Koh Samui teetering on the edge of exhaustion. We stepped off the airplane to a colorful trolley car (not a bus, for once) and were shuttled right to the arrivals hall of the charming and seemingly brand-new Koh Samui airport.

Rumor has it Koh Samui is on track to be the next big destination for Thai tourism and the airport might as well be one big pristinely-landscaped, engraved invitation to visitors. With the recent opening of several properties by international hotel chains (like the two Starwood resorts we would be calling home during our stay) it seems Koh Samui is well-positioned to compete with perennial Andaman tourist powerhouse, Phuket.

Before tourism dollars began to trickle into Samui in the late 70’s, the economy of this island in the middle of the Gulf of Thailand mostly revolved around coconuts. With ideal weather and good soil, Samui is home to more coconut-palm varieties than any other place in the world. While the island’s interior is still largely devoted to agriculture, the coast is now lined with high-end resorts and beachfront bungalows with more on the way. 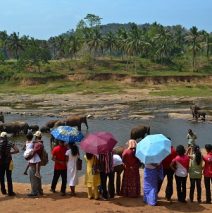 After a quick and painless 90 minute flight from Malé, we landed in Sri Lanka just as the sun was setting. Susan had booked our room in Colombo with her Hilton points and arranged for the hotel to pick us up at the airport.

We had considered renting a car for our 30-hour stay but since we would have had to pay for 2 days, we decided to get to the hotel first and consider the car rental for the next day. The drive into the city took almost an hour and as I peered out the window, I quickly realized that this was not a country I wanted to drive in. I’m generally pretty adventurous when it comes to driving in foreign countries and more than comfortable with driving on the other side of the road. But as I looked around, what I saw outside the window reminded me of my visit to India more than I cared to admit. There were no lanes, no traffic lights and the streets were thick with buses, tuk-tuks, motorbikes and cars. The entire scene verged on chaos and I truly had no desire to be an active part of it. 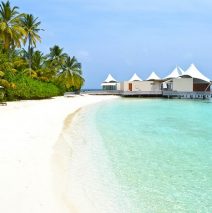 If not for a bit of luck in Abu Dhabi and a minor miracle in Doha, Qatar…we might have missed the Maldives entirely. After a full day exploring Abu Dhabi, we arrived at the airport at 10:00pm excited for our redeye flights to the Maldives. Flying Qatar Airways, we had a quick connection in Doha to catch our longer flight to Malé, Maldives.

As we got in the line for check-in, I glanced at the departures board and noticed that practically every flight showed delayed or canceled. What!?? The weather outside seemed fine, we were in the middle of the desert after all, what could be the problem? As it turned out, the problem was fog. Enough fog to cause the virtual shutdown of the Abu Dhabi airport.

Having spent months researching flights to the Maldives and knowing how limited the options were, I had an immediate sense of dread. If this flight didn’t go, we were in big, big trouble. We’d be lucky to get to the Maldives at all, much less by the next day. 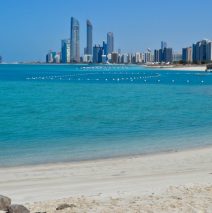 After a 12-hour flight from Réunion, I landed in Paris and hopped on the train to meet up with my friend Susan at the Westin Paris. Susan flew in earlier that afternoon and will be joining me for the next 2 weeks of RTW #7! No one has ever joined me for this long on one of my RTW trips and I am super excited that Susan is coming along.

After meeting up at the hotel, we headed out for a spectacular dinner at my favorite little restaurant on Ile St. Louis before calling it a night (since we both had spent most of the night before on a plane). The next morning we caught the train back to the airport and headed to Abu Dhabi.

Situated in the southeast of the Arabian peninsula, the United Arab Emirates (U.A.E.) is a federation of 7 emirates (similar to principalities) and the capital city is Abu Dhabi. I’d visited one other emirate before – Dubai – on RTW #1 and it was quite an amazing experience. The UAE is known for oil, opulence and over the top architecture and I wondered if Abu Dhabi would measure up to Dubai.

The Garden Island of Reunion 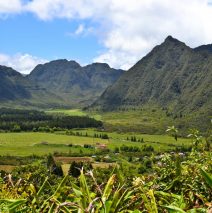 Sandwiched between Madagascar and Mauritius…and hundreds of miles from anywhere else, lush Reunion Island is a French outpost with a decidedly spicy Creole flavor.

Though it’s not known for pristine beaches and flashy resorts, like neighboring Mauritius, the island does have a few picturesque sandy shores framed with sparkling blue sea and more than one nightlife-centered resort town. But the real draw of Réunion is its stunningly unique natural setting featuring soaring peaks and one of the world’s most accessible active volcanoes.

My visit to Réunion island was split into two parts. Since Air France flies to both Mauritius and Réunion I didn’t really have a preference of which to see first – which was good because the only frequent flier availability was in and out of Réunion (and I was extremely lucky to get that!). I decided to just fly myself between the two via convenient and reasonably-priced forty minute flights on Air Mauritius.

After all, I could hardly come all the way to this part of the world and not see them both.