Myanmar – Part One: The Beauty of Yangon 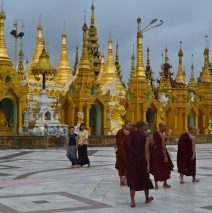 “I’m so sorry, it’s not okay” explained the Air Mandalay agent as she politely handed back my perfectly crisp and lovely US $100 bill. It wasn’t exactly the welcome we were looking for when we arrived in Myanmar but I would imagine we’re not the first to arrive in the country formerly known as Burma with worthless cash.

After a quick flight from Bangkok, we had just landed in Yangon, Myanmar and our first mission was to find the Air Mandalay ticket office to pay in cash for our domestic flights later in the week to Bagan and Mandalay. We’d made the reservations online but ticket payment was strictly in cash in US dollars. So after clearing immigration without a fuss we emerged into the arrivals area of the international terminal in search of the office.

We were directed to the domestic terminal for the Air Mandalay office which sounded as though it was right next door but turned out to be a half-mile walk in the sweltering heat…with luggage. We finally found the correct desk and waited patiently as they diligently hand-wrote our tickets. Then we proudly forked over our top-quality US dollars and one-by-one the Air Mandalay agent rejected them. Uh-oh. 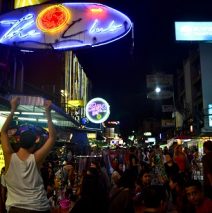 After two weeks on the road around the Himalayas, Bangkok was Shannon’s final stop of the Asian summer tour before she headed home and my friend Angela (whom I met on the Antarctica cruise in January) flew in from Australia. Ang would be joining me for the next 10 days of the trip.

I’ve been to Bangkok on each of my round-the-world trips so this was my 9th visit to this wonderful city. We arrived at Bangkok’s domestic airport (DMK) from Krabi at 5pm and by 5:30pm were in a taxi and headed to my favorite home in the city, the Royal Orchid Sheraton Hotel & Towers.

Unfortunately, we hit the worst traffic I’ve ever seen in Bangkok and it took us 2 ½ hours to get to the hotel. I’ve never had an airport trip take longer than 45 minutes from either airport but I guess I’ve never landed during evening rush hour before. The odd thing about Bangkok traffic is the system of traffic lights, some of which can remain red for a solid 20 minutes (we were on the receiving end of those extended red lights a number of times). But just before 8pm we arrived at the Sheraton, just in time to enjoy a glass of wine from the Towers Lounge overlooking the Chao Phraya River.

The Full Monsoon-Season-Monty in Krabi Thailand 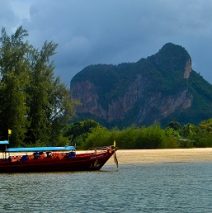 In Thailand’s defense, we knew what we were getting ourselves into. After all, you don’t travel to Southeast Asia during the summer monsoon season without expecting a little rain to fall. But I’d been to Thailand eight times before (though always in January or February) and never seen it rain even once so I figured, “how bad could it be?” And all things considered, I think we were ultimately pretty lucky.

After a quick transfer in Bangkok from our blissful stay in Bhutan, Shannon and I arrived in the southern province of Krabi Thailand to a setting sun capping what we were told had been a beautiful day. We had two full days ahead in Krabi and planned to spend one relaxing by the pool and the other doing a little island-hopping in the immediate area.

Since it was late when we finally arrived at the beautiful Sheraton Krabi Thailand Resort, we decided to ease into our Thai beach vacation and spend the next day enjoying the hotel’s pool and beach before selecting a day-trip for the following day. And we ended up with nearly perfect weather for our first full day. It was a great opportunity to relax and do nothing for once. After almost two weeks of constantly being on the move we had certainly earned it. I mean, this is supposed to be a vacation.

Himalayan Happiness in the Kingdom of Bhutan 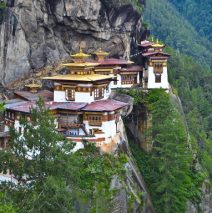 “How was the landing?” our guide, Tshering, inquires with a mischievous smile as we pile into the car. He knows how the landing was. Like they all are at this tiny airport sandwiched between soaring Himalayan peaks. Rough. In fact, Paro’s international airport (the only one in Bhutan) is known as one of the world’s most dangerous airports and just 8 pilots – all from the Bhutanese national carrier, Druk Air – are qualified to land there.

Strong winds whip through the valley and pilots have to weave through dozens of houses scattered on the mountainside and contend with a runway shorter in feet than the town’s elevation. All of these factors can result in a landing that some have deemed “terrifying.”

I wouldn’t call our landing terrifying, but I would definitely say that of all of my landings (and there have been a lot) it was by far the most alarming. The kind of landing that requires a stiff drink and a mastery of the brace position…and that leaves you wondering, “Did we land or were we shot down?” Luckily, the only casualty was the lens cap sitting on the empty seat next to me which went flying on impact and was never recovered. RIP lens cap. You will be missed. 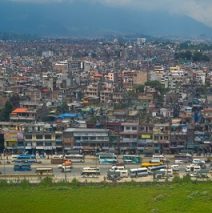 “Wear a mask, brush your teeth with bottled water and don’t open your mouth in the shower under any circumstances” offered my friend Clay (who did the Everest Base Camp climb a few years ago) when I solicited advice for my upcoming visit to the congested and notoriously polluted Nepali capital.

But despite his warning (which would make a lousy motto for the Kathmandu tourism bureau), I was undeterred. After all, no trip around the Himalayas was complete without a visit to Kathmandu and though I didn’t know quite what to expect, I have to admit I was drawn by the mystique of such an exotically gritty city. I figured it would be similar to my visits to neighboring India and Sri Lanka. And let’s be honest, Kathmandu just sounds cool. It simply had to be part of my Himalayan adventure…potentially-lethal water supply notwithstanding.

Once thought to be the fabled Shangri-La, today’s Kathmandu is the eclectic gateway to Mount Everest for thousands of intrepid climbers each spring. But this Himalayan capital is more than just a means to an Everest-sized end. In fact, most visitors to Nepal don’t come for the climb, they come for the culture. 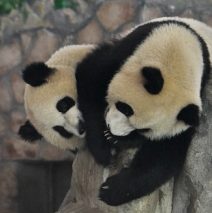 Chengdu was not a planned stop on our original Asia itinerary. But when the entry permits for Tibet fell through last week, we had to make some last minute adjustments to the schedule. Changing our flights to skip Lhasa, Tibet and go directly from Beijing to Kathmandu, Nepal meant an overnight layover in Chengdu.

So, as a couple of experienced travelers accustomed to rolling with the punches, we decided to embrace our new stopover and make the best of it. I found a lovely new Starwood property to check out (the Sheraton Chengdu Lido) and Shannon dove into research on what there was to see and do in Chengdu. We didn’t have much time there, just half a day, but thorough research revealed that there was one adorable attraction not to be missed – the Chengdu Research Base of Giant Panda Breeding.