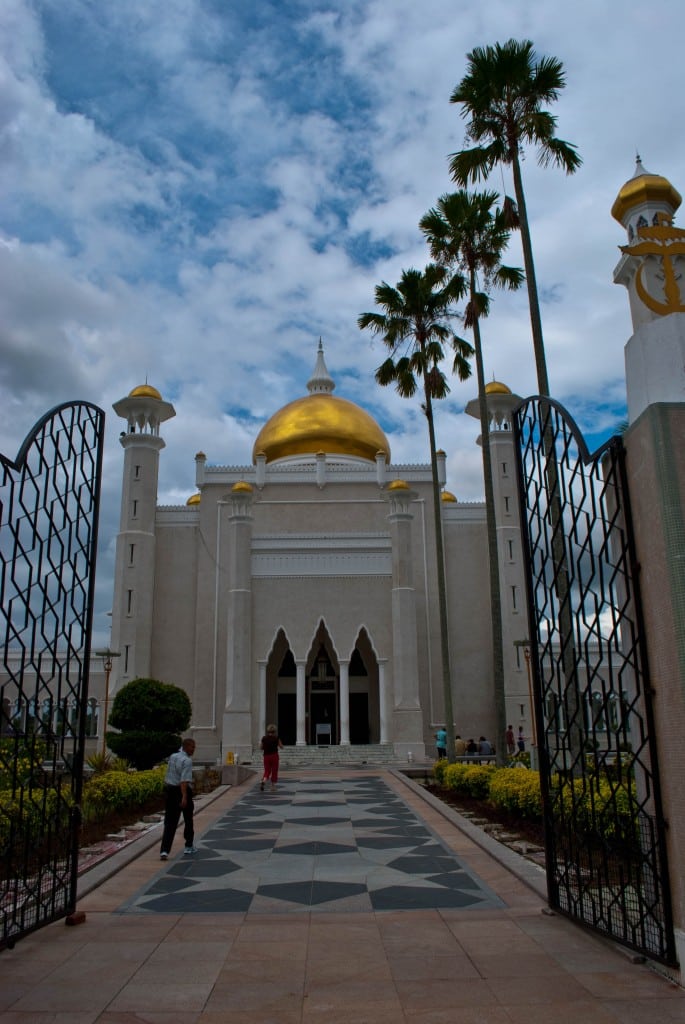 To get from Borneo to the Philippines, I was flying Royal Air Brunei and the  flight came with a 5-hour layover in Brunei. Some might consider this an inconvenience, to me it was an opportunity! I wouldn’t have much time to see some of Brunei, but as it turned out, I didn’t need it.

This tiny sultanate makes up less than 1% of Borneo’s landmass. In fact, if it weren’t for the discovery of oil in 1929, which turned the tiny state into an economic power overnight, it was destined to be swallowed up by neighboring Malaysia.

Formerly a British protectorate, Brunei has been completely independent since 1984. In the years since, the nation has veered toward Islamic fundamentalism adopting a national ideology known as Melayu Islam Beraja (MIB).

In 1991, alcohol was banned and stricter dress codes were introduced. Brunei is ruled by Sultan Hassanal Bolkiah, son of Sultan Omar Saifuddien who was instrumental in the country’s independence.

I really only had two things on my layover agenda in Brunei’s capital of Bandar Seri Begawan:

So, after landing and clearing immigration, I headed out to the taxi queue in search of a driver for the day. I easily found one, we agreed on a price and an itinerary and headed toward town.

First up, Brunei’s famous water villages of Kampong Ayer. My taxi driver took me down to the river where it’s easy to hire a boat for a tour of the villages. He helped me find an available boat and then even gave me his extra cell phone and his card so I could call him when I was ready to be picked up. I negotiated a price with my boat driver and we were off!

Housing an estimated 20,000 people, Kampong Ayer is made up of 28 water villages and is considered to be the largest water village in the world. Locals like to call it “Asia’s Venice.” I’d never visited a water village before so this was a totally new experience for me. There were floating schools, mosques and even gas stations. Transport is by personal watercraft or water taxi.

Though the jumble of colorful shacks looks run-down from the outside, I have it on good authority that the interiors are as modern as a NYC condo.

The two California doctors I’d met the day before had stopped over in Brunei on their way to Kota Kinabalu, and done a boat tour that included a home visit. They showed me pictures of the interior that featured flat screen TVs and ornate furnishings. Based on their pictures, I suspect many of the ramshackle exteriors are deceiving.

It was a gorgeous day for a boat ride and I enjoyed seeing the villages. My boat driver even took me down the river a little further and we found yet another harem of proboscis monkeys without even trying!

After he returned me to the docks, I walked around the nearby market for a bit before calling my taxi to come pick me up and continue my tour to the mosque.

The Omar Ali Saifuddien Mosque was built in 1958 and is named for Brunei’s 28th sultan. The 145-foot minaret makes it the tallest building in the central city and it’s not likely to be outdone anytime soon. In fact, rumor has it that plans for the nearby Bank of Brunei building originally exceeded this height until the sultan ordered the top floor removed.

The exterior of the mosque is simply stunning – probably the most beautiful I’ve ever seen. Its striking gold dome can be seen from almost anywhere in the city. The floor and walls are made from the finest Italian marble and the stained glass windows were made in England.

I couldn’t check out the interior since a prayer service was in session during my visit but from what I heard the exterior is the real draw.

My quick visit in Brunei complete, I headed back to the airport for my connecting flight to Manila. It was a nice stopover and I was happy to get a taste of this tiny nation. And I really loved Royal Brunei Airlines. It’s the only airline I’ve ever flown that gives you a hot towel and pre-flight beverage…in coach!  Not too shabby.

Of course, before takeoff they also make an announcement that they are going to bless the plane – followed by several minutes of melodic Islamic prayer over the intercom that made me wonder if the pilot had positioned the plane facing Mecca. But overall, two enjoyable flights and an excellent stopover in Brunei.

Next up, the Philippines!