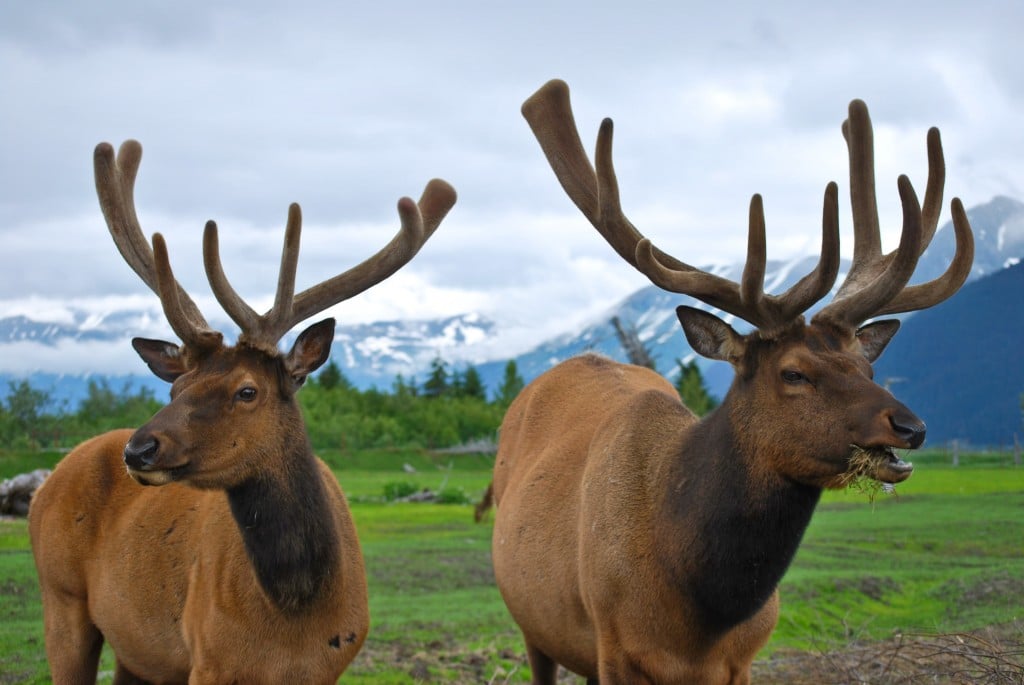 I honestly don’t know what I was thinking.

How is it possible I’ve spent the past 10 years traveling the world and completely ignored this little gem in my own backyard? Yes, Alaska took me by surprise…though I’m not sure why. I have friends who’ve been, my parents have been – all came home raving about the beauty of our 49th state.

Yet it wasn’t on my shortlist.

But six weeks ago when in search of a summer marathon to run, the Mayor’s Marathon in Anchorage caught my interest. A reasonable flight (to me), a new destination, and – most importantly – an escape from the oppressive summer heat of Atlanta.

So I booked my flight and started training – yes, a little late!

A few weeks later, I landed in Anchorage with only two full days to explore before the race. I’d done no research and had no idea how much I could squeeze into only 48 hours but I was determined to make the most of my time.

The first thing I noticed on the night I arrived was the endless daylight. Though the sun does eventually set, a sort of permanent dusk settles in around 10pm and persists through sunrise the next morning around 4am. If you want to sleep, heavy curtains in your hotel room is a must.

What to do with 2 days in Anchorage?

The next morning I awoke early anxious to visit the Anchorage Visitor’s Center and explore my options. I’d read about a Dog Sled Rodeo show which sounded like a must-do (especially considering my undying love for huskies) and I had some vague notions of a glacier visit. Other than that, I was up for anything.

The Visitor’s Center was a huge help. I purchased a ticket to the Dog Sled Rodeo for that night and decided to spend the day touring around Anchorage.

For the next day, I wanted to do a day-trip but with the extended daylight hours, many of the tours didn’t return to the city until late at night. With the race the following morning, I knew I wanted to be back at the hotel no later than 7pm.

I eventually settled on a half-day semi-private tour that would get me back by 7pm and included a good variety of sights in the greater Anchorage area.

For the remainder of Day 1, I wandered the charming streets of Anchorage and enjoyed the cool, sunny 60-degree weather.  Anchorage in the summertime is gorgeous. Full of colorful flowers, sea views and stuffed moose and bear in every storefront.

In the afternoon, I made a quick trip to the race expo to pick up my race number and timing chip and read through the extensive information on what to do if you encounter a bear on the race course.  (Tip:  Rule #1 is don’t run…WHAT???!?!)

That evening it was time for the Seavey’s Wild Ride Dog Sled Rodeo. Put on by the Iditarod champion Seavey family, the show features the family’s numerous sled dogs showing off their talents in an entertaining and educational look into the life of a sled dog on the Iditarod trail.

It was a great show and the best part was cuddling the husky puppies afterward. A must-do in Anchorage!

A Trip to Portage Glacier

The next day it was time to get out of the city for a day trip. When my tour guide picked me up, I was happy to see that there were only 3 other people in our group – all in town for the race. In fact, 2 of them were even from Ellijay, GA where my parents live – small world!

Since I’m not a fan of group tours, this was the perfect-sized group for our trip.

We headed out scenic Seward Highway along what’s called Turnagain Arm. The 1964 Good Friday earthquake caused the land to drop between 6 and 12 feet along Turnagain Arm and high tides then flooded the area with salt water. The salt water petrified the forests along the Arm turning them into the “ghost forests” visible along the shoreline today.

Our first destination of the day was Mount Alyeska.  As we drove, I had to keep reminding myself that this was a U.S. state and not another country entirely – the scenery was just out of this world. When we arrived at Mount Alyeska, we took an aerial tram 2,300ft to the top. We had lunch at the Seven Glaciers Restaurant while watching the skiers and snowboarders play below.

Our next stop was the Alaska Wildlife Conservation Center. This was my chance to see all of Alaska’s wildlife in one setting. The center is home to brown and black bears, moose, elk, reindeer, muskoxen, bison and even a bald eagle. The wide-open, spacious enclosures made you feel as though you were walking through a forest and observing the animals in their natural habitat…without the fear of being eaten by a bear, of course.

Our final stop was the one I was most looking forward to, a cruise to Portage Glacier. We arrived just in time to board the boat with 50 or so other tourists. Though it was quite cold out on the iceberg-choked Portage Lake, the views of the glacier were stunning. It was an amazing experience to see a glacier up close and definitely the highlight of my day.

After a full and exciting day, it was time to return to Anchorage, close the hotel drapes and try to get some sleep before the race.

The next morning, I was pleased to see the weather was a crisp 55 degrees with overcast skies – marathon perfection! I rode the bus to the start line at a high school outside of town and waited for the starting gun with 1,000 other runners.

Once the race started, I was dismayed to discover that much of the course turned out to be along a gravel trail. Though I knew part of the race course would be trail, I didn’t realize that 1) the gravel would be so difficult to navigate and 2) that it made up so much of the course (more than 13 miles). On the plus side, the only bear I had seen so far was a guy in a bear suit at the ½ marathon point – comic relief was welcome at this point!

Despite the trail surface, the course was undeniably beautiful – wooded trails, rushing streams and distant snow-covered mountains. As the race went on the trail narrowed in many spots through the woods. Which meant there were times when you couldn’t see another runner ahead or behind you. These were the times I became most concerned about bears.

Luckily, there were volunteers with bells every mile or so to – hopefully – keep the bears away from the trail. Despite this, there were runners on the bus back to the hotel after the race who did indeed see bear cubs on the trail…yikes!

Around mile 17, the race course finally emerged from the trail and back onto paved highway for a while…hooray. At mile 20 the course wound back through wooded trails but thankfully along a paved path. Just past mile 22, I had my first wildlife sighting of the race – a moose!!

I kid you not, right there ON the race course in front of me, was a moose. This was definitely a first for me on a marathon course. I had a couple of thoughts.

First, there was no mention at the race expo of what to do if you encounter a MOOSE on the course. And second, our tour guide the day before had thrown out an interesting statistic – more people are killed by moose in Alaska than by bears. Food for thought.

While I was pondering this situation, I noticed there was another runner ahead of me who had stopped to take a few pictures. The tourist in me took over and I decided to do the same. After snapping a few shots while the moose lumbered along seemingly unaware of me, I put my camera away and – giving him a wide berth – passed him on the trail.

At this point, I was not exactly sure what to do. I wanted to continue running but as I looked over my shoulder, the moose was still coming down the trail behind me. The last thing I wanted to do was encourage a chase.

Plus, I couldn’t help but wonder if the #1 rule with bears – don’t run – also applied to moose. Better safe than sorry.

I continued walking at a brisk pace peeking over my shoulder as the moose continued to follow – seemingly aware of me now. Uh-oh. Where the heck were those race volunteers??

Finally, I came around a corner on the trail and there was a race volunteer stationed there. I said, “Hey, there’s a moose back there” just as the moose rounded the corner. The volunteer looked alarmed and told me, “Get off the course and don’t run. If he looks directly at you, get behind a tree, he may charge you.”

Charge me?? Now, I’m concerned…and conducting a rushed search for the most suitable tree.

Around that time, several other runners came up from behind the moose – also taking pictures. The volunteer yelled at them to get off the course and behind a tree. Startled, they quickly obliged.

And it was there, behind our individual trees, that we all waited out the moose. Luckily, it didn’t take him long to lose interest and start grazing again – at which point the volunteer waved for us to go on.

After that excitement, the rest of the race was entirely uneventful. I finally crossed the finish line but I’ve decided to claim an 8-minute “moose-avoidance” deduction off my official time. When in Rome.

Overall, the trip to Alaska was painfully short. I can’t believe I thought 3 days would be enough time to do it justice. In fact, I’m not sure 3 weeks would have been enough time.

I can’t wait to come back and explore Fairbanks, Denali, Juneau and everything else our wild and wonderful 49th state has to offer.